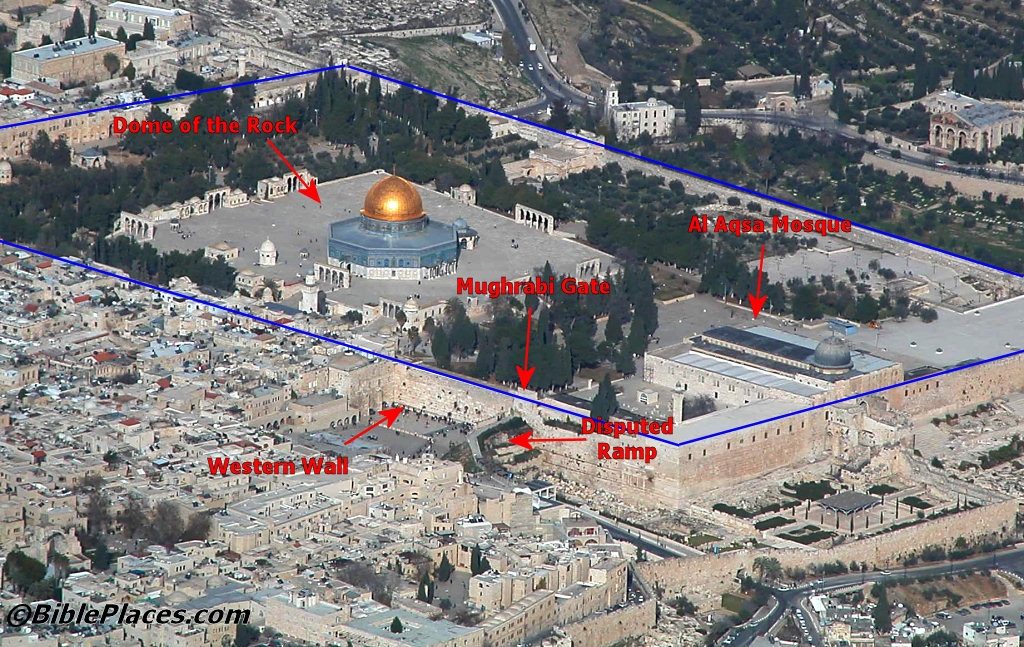 A beautiful verse from Sūrat Al-Isrā where Allāh the Almighty makes a link between Al-Masjid Al-Haram in Mecca and Masjidul Aqsa in Palestine. The former, by the grace of Allāh, is attended and revered but as for the latter, it is neglected and is under genuine threat of demolition at the hands of the Israeli occupiers who seek to make way for the rebuilding of the alleged temple of Solomon, which they claim lies beneath it. It would be a betrayal to the Ummah to cast a blind eye over the pangs suffered by Al-Aqsa and it would be just as treacherous to the Ummah to cast a blind eye at the fantasies that have been fabricated around this sanctuary called Al-Aqsa.

What is Al-Aqsa? Why do the Muslims place such great emphasis on its importance?

The Masjid of Al-Aqsa in Jerusalem is the first Qibla towards which the Muslims directed their prayer for 16 or 17 months before it was then changed to the Kaʿba. Al-Masjidul Aqsa is the brother of Al-Masjid Al-Haram in Mecca and Al-Masjid AnNabawi in Madina. In fact, it is narrated by Abū Hurairah (raḍiy Allāhu ʿanhu) that Muslims are not allowed to travel the earth with the intention of worship except to three places, one of which is Al-Masjid Al-Aqsa.[2] As the second Masjid on earth to be built for the worship of Allāh, after Al-Masjidul Haraam in Mecca, it holds great status for Muslims.

It is reported by Abi Thar

Al-Aqsa is therefore not solely a mosque and Palestine is not simply a plot of land. Its exclusivity is further highlighted by the fact that Al-Aqsa is the only place on earth to host a most miraculous conference attended by every single prophet and messenger to have walked the earth, all 124,000 of them, at the same time, with the Prophet (sall Allāhu ʿalayhi wa sallam) honoured with leading them all in prayer.

And listen on the Day when the caller will call from a near place. The Day when they will hear scream in truth: that will be the Day of emergence.[4]

This “near place” where the horn will be blown is on top of the rock in Jerusalem.

Further to the virtues of Al-Masjidul Aqsa is that it is recorded in aḥadīth as a place where sins are shed.

Today, Zionists of the occupying nation of Israel argue that they are the inheritors of the prophets and therefore AlQuds belongs to them from both historical and religious perspectives.

As far as the alleged historical right is concerned, the Canaanites (الكنعانيون), who were an Arab tribe, left the Arabian Peninsula and settled in Palestine approximately 6000 years before the birth of ʿĪsā (ʿalayhi al-Salām). As for the Jews, they entered Palestine hundreds of years after Ibrāhīm (ʿalayhi al-Salām) had entered it and approximately 1400 before the birth of Christ which means that the Arab Canaanite tribes had arrived in Palestine around 4500 years before them.

As far as the alleged religious right is concerned, in support of their claims is the Old Testament in which Bethel, the Lord, said to Abraham: ‘All the land which thou seest to thee will I give it and to thy seed for ever’.[5] And, God said to Abraham, ‘Unto thy seed have I given this land, from the river of Egypt unto the great river Euphrates’.[6] In fact, Abraham makes a covenant with God and all the land of Canaan was promised to him as ‘an everlasting possession’.[7]

As regards this covenant which they claim that Allāh gave to Abraham, it has also been recorded in the Qur’ān but with further detail mentioned, which makes all the difference.

And [mention, O Muḥammad], when Ibrāhīm was tried by his Lord with commands and he fulfilled them. [Allāh] said, “Indeed, I will make you a leader for the people.” [Ibrāhīm] said, “And of my descendants?” [Allāh] said, “My covenant does not include the wrongdoers.”[8]

Allāh (subḥānahu wa taʿālā) makes it manifest that this covenant only applied to the faithful and righteous amongst the children of Israel. However, when Allāh was mocked, accused of being stingy, accused of weeping, when His Prophets were ridiculed, maligned and murdered habitually, they became excluded from this covenant.

Allah mentions in the Qur’ān,

“Allāh has certainly heard the saying of those who said: Surely Allāh is poor and we are rich.”[9]

As for the sheer number of Prophets who were slain at their hands, and the countless attempts made at the life of the Prophet Muḥammad (sall Allāhu ʿalayhi wa sallam), this is another discussion altogether. Which covenant do they claim to have been given by Ibrāhīm (ʿalayhi al-Salām) while Allāh rejects the wrongdoers? And what greater wrong doing is there than their blasphemous accusations?

The covenant of Allāh which he gave to Ibrāhīm (ʿalayhi al-Salām) and his descendants belong to none other than the righteous Muslims.

“Ibrāhīm was neither a Jew nor a Christian, but he was one inclining toward truth, a Muslim [submitting to Allāh]. And he was not of the polytheists. Indeed, the most worthy of Ibrāhīm among the people are those who followed him [in submission to Allāh] and this prophet (Prophet Muḥammad (sall Allāhu ʿalayhi wa sallam)), and those who believe [in his message]. And Allāh is the ally of the believers.”[10]

And using this allegation, i.e. the allegation that they are the natural inheritors of the Prophets and Messengers, has been used as a platform for the fabrication of yet another allegation: That beneath Al-Aqsa lies the remains of the temple of Sulaimān (ʿalayhi al-Salām). And to them, Israel is nothing without Jerusalem and Jerusalem is nothing without the temple of Sulaimān (ʿalayhi al-Salām).

However, this allegation is easily dismantled the moment we consider that Al-Masjid al-Aqsa was built before the birth of Sulaiman (ʿalayhi al-Salām). How, then, could the remains of his temple lie beneath a building which was erected before his birth?

Our scholars have three opinions regarding who was the first to have built the masjid:

So even if we were to take the third opinion in that the first to have built Al-Aqsa was Ibrāhīm (ʿalayhi al-Salām), we still know that Ibrāhīm was around hundreds of years before Sulaimān (ʿalayhi al-Salām). So how can anyone claim that Al-Aqsa is built above the remains of the temple of Sulaimān? Sheikhul Islām Ibn Taymiya said:

The only evidence which is ever cited for this alleged temple which lies beneath Al-Aqsa is from the bible and, even there, it does not mention that it was within the area of Al-Aqsa. Furthermore, Sulaimān did not build one specific and special place of worship but he built many. Allāh says, speaking about the Jinn who worked for him:

They made for him what he willed of places of worship; elevated chambers, statues, bowls like reservoirs, and stationary kettles.[12]

There have been scores of excavations resulting in claims of findings from the remnants of the temple but they are invariably always proven to be forged very soon afterwards. The most recent of these findings was the Jehoash inscription (a stone tablet with a Hebrew inscription speaking of the Temple of Solomon with the same description that appeared in the bible) which appeared to be of importance, offering the only known archaeological evidence for Solomon’s most celebrated building. After some studies into its origins, it was found to be completely falsified; a tablet forged to generate millions for rich museum owners and to try and convince Zionists of the veracity of the Temple.

In 1961, the Israelis claimed that they had found what they called the remains of the stables of Solomon. They invited the renowned British archaeologists Kathleen Kenyon to investigate and, after six years’ worth of excavations in Jerusalem, she concluded that these alleged “stables” were totally impractical for holding horses.

Al-Masjidul Aqsa today is being stormed over and over again by Jewish settlers and on the 30th of October 2014, Al-Masjidul Aqsa was completely closed off for the first time in 50 years. Imagine this, for 24 hours, our third holiest sanctuary of worship was empty of Muslims. And then, under the protection of the Israeli police, over 140 settlers stormed the blessed compound, desecrated the site, fire was set fire to parts of the buildings and although they reopened the Mosque, what used to be a weekly invasion of the Mosque become daily.

For the first time in history, the Israelis are now discussing the status of Al-Aqsa within their Knesset. i.e., who does Al-Aqsa belong to? Settlers, rabbis and Jewish politicians are calling for the destruction of Al-Aqsa to pave the way for the alleged temple. There are also talks of partitioning Al-Aqsa. Will they succeed? They may do. We do not know nor do we have any evidence from the Qur’ān and Sunnah to suggest that this will not happen.

However, as Muslims, we do not despair for we have experienced much worse and the Ummah will eventually reclaim its possessions. Muslims have not forgotten that when the sanctuary of Al-Aqsa was closed following the first crusades, it became a stable for the Crusaders and as a mark of insult, pigs were installed inside the Mosque. Just like today, no prayers were to be performed therein and neither was the adhān to be heard in the land of Quds, Bait al-Maqdis, for nearly a millennium. But the Ummah would repent, return to Īmān and thus Allāh would return Al-Aqsa back to its owners.

And despite our situation at present, the Ummah of Islām will repent, will reunite upon Īmān and its leadership will be based in none other than the blessed land of Al-Quds, Jerusalem.

Ibn Huwaalah said that the Messenger of Allāh (sall Allāhu ʿalayhi wa sallam) placed his hand on my head and said ‘Oh, Ibn Hawalah, if you see that the Khilāfah has come to the sacred land (Al-Quds), then the earthquakes, the troubles, and the great happenings have come, and the hour on that day is nearer to the people than my hand here on your head.’

[11] Qurtubi and Ibn Hajar preferred this view as well.