#STAND4UYGHURS
Home / Analysis / What is Blair so agitated about? 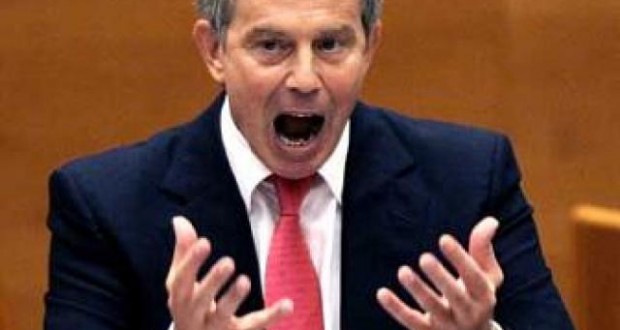 What is Blair so agitated about?

“And they planned and Allāh also planned, and Allāh is the best of planners”[1]

On 23 April 2014, the former Prime Minister, Tony Blair delivered a speech to Bloomberg in London wherein he called on Europe and America to put aside their differences with Russia and China and cooperate to “fight” what he describes as the “radicalised and politicised view of Islām.”[2] In other words, this is any Muslim who wishes to challenge the current status quo of Western imperialism and injustice. Here is a clip from his speech:

But have similar calls not been made for the world of oppressors and disbelief to unite against the Muslim community?

The defeat at the battle of Badr and the temporary victory at Uhud had made the Qurayshite community have one important dream: the destruction of Muhammad (sall Allāhu ‘alayhi wa sallam) and the religion of Islām once and for all. Pagan tribes outside Makkah were sharing with them the same dream. Like the Makkans, these tribes considered Muhammad (sall Allāhu ‘alayhi wa sallam) a serious menace and challenge to their rule. This belief brought these tribes and the Muslims into military confrontations in which the Muslims had the upper hand. These tribes, therefore, were like the Makkan community, full of resentment and rancour towards the Muslims and this belief together with the fact that the Muslim community was growing in number, strength and influence brought together various tribes from across Arabia. Some of the Jewish tribes inside Madīnah also had the desire to extinguish the Muslim community and a delegation from them went to Makkah and other Arab communities during the fifth year after the Hijrah, propagating war against the Prophet (sall Allāhu ‘alayhi wa sallam) and attempting to mobilise the Arab forces for the proposed war. They did not need much effort to persuade the Makkans towards a military undertaking against the Prophet (sall Allāhu ‘alayhi wa sallam). Their response to the invitation was prompt, and without hesitation, and they quickly mobilised four thousand fighters. This army was supplemented with six thousands from Ghatafān, Salīm, and other tribes. Thus, ten thousand marched towards Madīnah with the aim of obliterating the Muslims from the face of the earth and this battle came to be known as the Battle of Khandaq (Trenches) and the Battle of Ahzāb (Confederates). The 33rd sūrah (Chapter) of the Glorious Qur’ān which talks about this incident is indeed named Sūrah al-Ahzāb.

Without delving too much into the battle, we know that the Muslims had dug a trench around Madīnah to keep the Confederates at bay at the advice of the great Sahābi (Companion), Salmān al-Fārsī (radiy Allāhu ‘anhu). We know that the whilst they were unable to enter the city, the Jewish tribe of Banū Quraizah with whom the Muslims had a peace treaty, broke the treaty and joined the Confederates, meaning that the Muslims were now also exposed to the enemy from inside the city. There were many hypocrites who circulated frightening rumours, which added to the fear of the Muslims. The Holy Qur’ān tells us of the psychological crisis with which the Muslims lived during that period in verses 10-13 of Sūrah al-Ahzāb [3]. In this situation when all seemed at loss and in a seemingly overpowering situation, the Messenger of Allāh (sall Allāhu ‘alayhi wa sallam) and his great Sahābah stood firm declaring “HasbunAllāh wa ni’mal wakīl” (Allāh is sufficient for help and solace and he is the best disposer of affairs),  and increasing in their imān (faith) [4]. In this situation, the bravery of the Muslims was championed by ‘Alī (radiy Allāhu ‘anhu) who defeated the much feared ‘Amr b. ‘Abd-Wud in a personal duel.The weather then changed suddenly and cold wind started blowing from the sea. The wind was so cold and fierce that it was impossible for anyone to hold the tents and shelter. Abū Sufyān was so disappointed from the situation that he took his army and went away after laying siege for one month. So this was the glorious victory of Muslims in the Battle of Khandaq [5].

When you analyse the above incident, you will note that the main reason that the Quraish and all the other tribes gathered against the Muslims was because the Muslim community was growing in number and strength. And so too you find that at the heart of Blair’s long and cumbersome speech, is this fear of the rise of Islām. He states:

“At the root of the crisis lies a radicalised and politicised view of Islām… The threat of this radical Islām is not abating. It is growing. It is spreading across the world. It is de-stabilising communities and even nations. It is undermining the possibility of peaceful co-existence in an era of globalisation. In Russia, whose Muslim population is now over 15%, and influences are stretching across the whole of the central part of Northern Asia, reaching even the Western province of Xinjiang in China. In the Far East, there has been the important breakthrough in resolving the Mindanao dispute in the Philippines, where well over 100,000 people lost their lives in the last decade or so. But elsewhere, in Thailand, Myanmar, Bangladesh and Indonesia, there remain real inter-religious challenges and tensions. In the recent Indonesian elections, the Islamic parties received a third of the vote…The Muslim population in Europe is now over 40m and growing” [6].

Indeed it becomes clear that it is the growth and rise of Islām and the Muslim communities across the world which Blair is agitated about, triggering his recent delusional rant. By the grace of Allāh Jalla wa ’Alā, Islām is the fastest-growing religion in the world today. Looking closer to home, the most recent tranche of data from Britain’s 2011 Census was released in December 2011 [7]. The census data shows that the number of Christians in England and Wales declined by 11% (4.1 million) during the past decade, from 37.3 million in 2001 to 33.2 million in 2011. During the same period, however, Alhamdulillāh (Praise be to God), the Muslim population in England and Wales increased by 80% (1.2 million), from 1.5 million in 2001 to 2.7 million in 2011, making it the second-largest religion in Britain. The number of those describing themselves as Christian has dropped from 72% in 2001 to 59% in 2011. The number of Muslims has increased from 3% to 5% over a decade. In fact, some analysts believe the true number of Muslims in Britain may be much higher than indicated by the census data. This is because the religion question was the only voluntary question on the 2011 Census and 7.2% of people did not answer the question. It is believed that many of those who completed the census data were reluctant to identify themselves as Muslims and that the true number of Muslims in the country is considerably higher than the 5% indicated by the census data. Although immigration is one potential factor in the rise of Islām in Britain, it is also true that hundreds of Britons are converting to Islām every month.

According to a survey conducted by Kevin Brice from Swansea University, the number of British converts to Islām recently passed the 100,000 mark, and there are as many as 5,000 new conversions nationwide each year. Previous estimates had placed the total number of Muslim converts in Britain at between 14,000 and 25,000 [8]. The survey revealed that nearly two thirds of the converts were women, more than 70% were white and the average age at conversion was just 27.

Some observers say the decline of traditional Christian churches in Britain, a trend that is being accompanied by the demise of Judeo-Christian moral codes in British society, is creating a spiritual vacuum that Islām is beginning to fill. In fact the survey conducted by Mr Brice found exactly that – he asked converts for their views on the negative aspects of British culture. They identified “alcohol and drunkenness,” a “lack of morality and sexual permissiveness” and “unrestrained consumerism”. Separately, government authorities recently revealed that an increasing number of inmates at British prisons are also converting to Islām [9].

Despite the constant maligning of Islām by its enemies and its detractors in the media, Islām continues to grow. The British public, like many other non-Muslim communities across the world are very open-minded and this is demonstrated in the sheer numbers embracing Islām, and it is for this reason that when you hear comments such as those made by the war criminal, Tony Blair, you should smile and know that the promise of Allāh and his Messenger are indeed true. The Messenger of Allāh (sall Allāhu ‘alayhi wa sallam) said: “Verily, this matter (Islām) will reach where day and night have reached, and it will not leave a house of Madar (mud or clay) or a house of Wabar (fur of camels and goats, i.e. tents) except Allāh will bring it into this Dīn, (either) with the honour of an honoured one, or the disgrace of a disgraced one; honour with which Allāh honours Islām, and disgrace with which Allāh disgraces Kufr (disbelief).”

So let us continue the work of Da’wah, calling people to Islām and winning the battle for the hearts and minds.. As to Blair and his supporters, we say as Allāh says in His book, “So wait, and we too will wait with you”[10] and let history bear witness to who was upon the truth and who was upon falsehood. Criminals like Blair wish to suppress the rise of Islām for no other reason other than the fact that Islām is the only ideology in existence which threatens the very foundations of the Capitalist dogma, and they fear the justice of Islām in obliterating the injustice with which they rule and keep their subjects in a state of fear and panic. And no matter how many assemble to obliterate Islām, we know for a certainty that this is not possible, for this is a matter already ordained by the Lord of Worlds who has stated:

“It is He Who has sent His Messenger (Muhammad SALL ALLĀHU ‘ALAYHI WA SALLAM) with guidance and the religion of truth (Islām), to make it prevalent over all religions even though the Mushrikūn (polytheists, pagans, idolaters, disbelievers in the Oneness of Allāh) hate (it)”.[11]