The Slave Industry: A year on from Rana Plaza 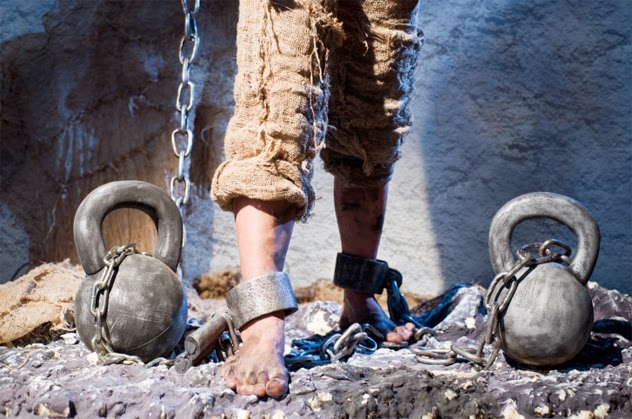 Note- A new documentary will air on the Islam Channel today  (24th of April 2014 at 9pm) ‘Slave Industry: A year on from Rana Plaza’,

A year ago today, with my sight set upon uncovering the ins and outs of Bangladesh’s so-called “International Crimes Tribunal”, I was thrown by a disaster of a different kind. I cannot call it an accident, as it has never seemed like one to me. On the 24th of April 2013 a large garment manufacturing unit located in Savar, on the outskirts of Bangladesh’s capital, Dhaka, collapsed. The grounds upon which the eight-storey commercial building collapsed were swampy, and the cracks on the walls that appeared days before which they gave way, were frighteningly large, despite which garment workers were forced to go back to work—knowing that the building was unsafe to work in.

When it collapsed, left inside this building were only garment workers, while all other employees evacuated in good time. When writing these few sentences the questions that float across my mind include the value we place upon lives; is it through someone’s complexion, job or position in society we value their worth? Why is it that the value put upon the lives of these garment workers was so little that it neither met the value of the clothing they produced nor of other parts of society?

Bangladesh’s heaving garments industry is made up of women, including young mothers, travelling from across the nation in order to provide for their families. It was mainly women inside the Rana Plaza complex that collapsed and mainly women who make up the 3.6 million driving Bangladesh’s economy. But this is the world of garment workers—the result of greed, corruption, injustice and rampant consumerism.

The Rana Plaza complex which collapsed last year was built using fast-tracked contracts by owners affiliated with local politicians, with safety not exactly high on the agenda. Weeks into the collapse the blame game began, whose fault was the collapse? On an immediate level, the factory-owning, junior Awami league leader, Sohail Rana, right? Who else: the buyers, the government or the consumers?

Due to a lack of transparency in the supply chain many businesses were able to step out of being confronted by simply passing the buck. Many buyers were unable to even identify whether their clothes were being produced in the factory—leaving consumers none the wiser.

From being locked into rooms with no fire exits, overheated from the machinery inside, to being paid peanuts and dismissed with no upholding of any rights, garment workers are at the bottom of a chain on this thread where it’s all too easy to take advantage of them. But of course the World Bank pushes Bangladesh to keep up with the demands of western consumers and ramp up investment in the industry. The road to success is being built for money makers at the top of this chain.

The money maker accounts for 80% of the country’s annual GDP and had facilitated the 6% growth the country has seen annually over the last seventeen years. One would think that as a result the 3.6 million workforce from the 150 million population would be on the priority list.

The garments sector has brought about many a story and with its successes have come fires, water poisoning and the collapse.

Over a thousand people lost their lives and more than two thousand were left injured as a result of the Rana Plaza factory collapse, built on swampy ground, without adequate paperwork and very close to having more storeys built, a symptom of fast fashion for factory owners pacing to keep up with demand and growth. A year later, garment workers still suffer from the ills of our trillion dollar fashion industry.

Pressure has been placed on governments and buyers to act but consumers must realise the deathly squander of rampant consumerism and the ills that it can bring about. To so many Muslims this is still a distant issue; completely ignorant to the merits of this cause.

Weeks after the collapse there were reports of water poisoning. Six months on, there was a factory fire in which there were nine fatalities and at least a further fifty injured. For those looking at the sector these aren’t strange occurrences. We can see what’s going on; we see it on our backs, in our stores, on the high street and on the TV, but why is it that we don’t take this seriously? Is it because we can enjoy the exploits of fast fashion, because we’ve become disengaged with our purchases or just simply enjoy the lifestyle that rampant consumerism brings about?

Our religion teaches us to be beings conscious of our actions, conscious of the way we interact with others and our impact on this world. Those who stand up against injustices, protecting those taken advantage of and those who are being abused.

In the garments industry there are different players at all levels of the chain. The governments, businesses, factory owners, buyers and consumers – everyone has a role to play, but our script need not be determined by others.

Muslims should be at the forefront of this fight and a bastion for those taken advantage of, supporters of the vulnerable, the Ummah united across borders. A £2 t-shirt may not have a great impact on you here but it does impact our brothers and sisters abroad. We may not feel the pinch of a pound but however much a garment or any purchase costs you it means something elsewhere too. As a part of a globalised world we impact each other in many ways and we are ever more connected.

Countries all around the world today are calling for and participating in a day of action, asking: who made your clothes? This question exists to reconnect the chain and reform that connection, because maybe if there were a reminder of that connection we would value our purchases a little more. You may not care about your garments, but you should care about the workers behind them and care about your thread; considering the implications of your purchases.

Educate your mind to think before you buy. Ethics in fashion is not just for middle class non-Muslim women and those with money, it’s an issue of a conscious and thinking mind.  I’m not telling you not to shop but to be aware of how much you are consuming and how far those implications stem.

Over 1.2 million tons if clothing is buried into a landfill each year and we’re consuming more than four times the amount we did 20 odd years ago. We weren’t made to be a wasteful Ummah but our ethics seem to be lacking and we are lagging behind. Do not be slaves to consumerism, consciousness is from Islam, an obligation and calling, we are Muslims and are not slaves to this industry or any man. When you hear the words “Slave Industry”, remind yourself not to be the one who is enslaved.

Notes- A documentary called ‘Slave Industry: A year on from Rana Plaza’, will air on the Islam Channel today  (24th of April 2014 at 9pm).