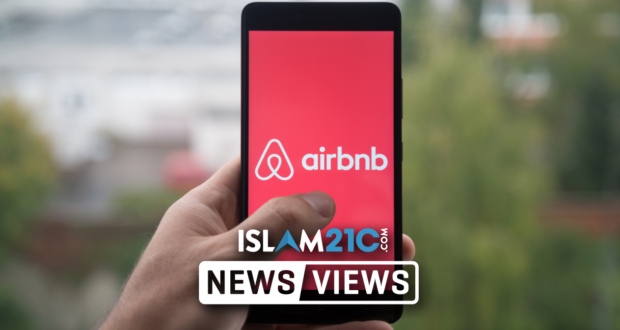 20,000 pledge to boycott Airbnb in protest over listings in occupied West Bank

The boycott is part of a global campaign protesting the company’s decision to re-list properties, coinciding with the Nakba Day.

Up to 20,000 people have pledged to deactivate their Airbnb accounts in protest to the rental company’s decision to re-list illegal properties in the occupied West Bank.

The boycott, also known as the #DeactivateAirbnb campaign, coincided with the Nakba Day on Wednesday, where people around the world commemorated the catastrophe that led to the expulsion of hundreds of thousands of Palestinians from their homes by Zionist ‘terrorist’ groups on May 15th 1948.

The director of the Palestine Solidarity Campaign, Ben Jamal, said:

“Today, thousands of campaigners across the world have sent a clear message to Airbnb that their disregard for human rights and international law will not be tolerated.” [1]

According to The Independent, over 2,000 members of the Palestine Solidarity Campaign (PSC) and 16,000 members from the Jewish Voice for Peace (JVP) have deactivated their Airbnb accounts in protest to the rental company’s reversal to re-list properties.

PSC and JVP are part of a global coalition of 20 international organisations involved in the boycott, ranging from Tunisia, Canada, Germany, Jordan, and Switzerland, as well as the UK.

“This day-long deactivation is just a first step in telling Airbnb you can’t do the right thing and then backpedal – and not expect blowback,” said Granate Kim, communications director at the Jewish Voice for Peace. [1]

“They’re not taking any money from rental fees, but honestly, that doesn’t matter. It’s more about giving in to baseless lawsuits, fear and feeding a narrative that says international law is fine to breach when it comes to Israel and that stolen land is fine to rent if it belongs to Palestinians.” [1]

The campaign has received widespread and global support with organisations such as the Boycott, Divestment and Sanction movement (BDS), American Muslims for Palestine (AMP), and the Just Peace Advocates, who are lending their support.

In November 2018, the rental booking company had said they would remove over 200 Jewish homes that had been illegally built on Palestinian land, following protests from Palestinians and international groups. However, five months later Airbnb reversed their decision after being threatened by ‘Israel’ and the US. Its policy reversal has been criticised by many, accusing the company of cowering to injustice.

Airbnb’s decision to reverse its earlier policy follows the re-election of Benjamin Netanyahu as prime minister for a fifth term. Netanyahu is set to form a coalition made up of far-right parties and has promised to annex the West Bank.

However, all ‘Israeli’ settlements in the West Bank are illegal under international law and have received unanimous condemnation from the international community, including the United States, ‘Israel’s’ closest ally. [2]

The Oslo Accords, signed between Palestine and ‘Israel’ in 1995, specifies that the West Bank and the Gaza Strip are for a future Palestinian state. [2] However, under the premiership of Benjamin Netanyahu, settlement building has expanded immensely, and many Palestinian villages and towns have been, and continue to be, demolished, leaving thousands of Palestinians to become homeless. [2]

2019-05-16
Muhammad Mussa
Previous: Syria: The Indomitable Human Spirit
Next: Restoring your faith in humanity this Ramadan