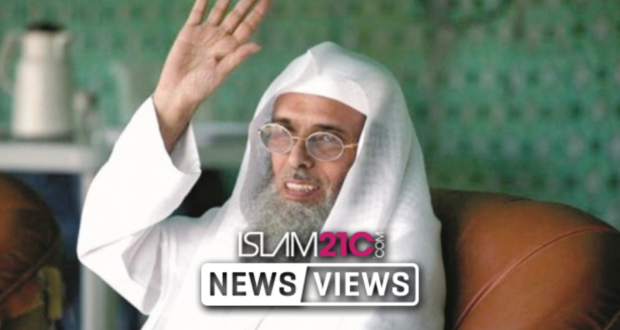 Contrary to reports of the death of prominent Saudi scholar Sheikh Safar al-Hawali in the prisons of the Kingdom, a close source familiar with the case has informed Islam21c that the Sheikh is alive and may even be released soon.

The source which has direct contact with the Sheikh’s family said that the family were officially informed on Tuesday 30th October that the Sheikh was alive and they were then permitted to visit him on Wednesday 31st October.

As well as being informed of the condition of the Sheikh, the family were permitted to visit his sons who are arrested including Abdur Rahman, Abdullah, Abdur Raheem and Ibrahim.

“I can confirm that the Sheikh is alive and his wife saw him. He gave his Salams to everyone. InshāAllāh we are hopeful that some of the many prisoners in Saudi Arabia will be released in the coming days.”

The source however added that:

“This is not due to any compassion on the part of the government but rather because of the pressure they are under.”

In July, reports emerged suggesting that the medical condition of Sheikh Safar al-Hawali and Sheikh Salman al-Ouda was deteriorating due to medical negligence according to the advocacy group ‘Mu’taqilī al-Ra’ī‘ or ‘Prisoners of Conscious’. [1]

In a tweet the group claimed that Sheikh Safar al-Hawali and his children had been pressured to disavow themselves from his book “Muslims and Western civilization”, and to claim that the book was not written by the Sheikh, in return for their release. [2]

Sheikh Safar al-Hawali and his sons were arrested on July 12th, a few days after the publication of the book attributed to the Sheikh, in which he imparts advice to the ruling family and the Council of Senior Scholars close to the monarchy.

In his book, the prominent Sheikh criticises the ruling family in Saudi Arabia and the Crown Prince of Abu Dhabi, Mohammed bin Zayed for their over-sized expenditure, saying it: “has been wasting funds on fake projects” and calling the Crown Prince’s cosy relationship with Israel a “betrayal”. [3]

A previous report by Al Jazeera suggested that the arrest of Sheikh Safar al-Hawali was because of what was contained of advice directed at the Saudi Arabian ruling family, scholars and activists.

This is the first time that the family has seen Sheikh al-Hawali since his arrest. The source stated that:

“The funny thing is that the first they heard about him after his arrest in July was on the same day that Sheikh Salman al-Ouda’s trial was adjourned.”

The source further added that:

“People expected him [Sheikh al-Hawali] to be sentenced to death but instead they adjourned the trial to December. The same public prosecutor (Saud al-Mojeb) who recommended the death sentence was in Istanbul trying to save the neck of MBS.”

“The authorities here told Sheikh al-Hawali’s family that he was alive and the next day his wife was allowed to see him. Before that they did not know if he was dead or alive. In fact, there were rumours just after Hajj that he had died in prison.”

The source informed Islam21c that the condition of the Sheikh remains the same as when he was taken prisoner. He walks with assistance and is unable to pray in the Mosque. The 68-year-old Sheikh has also suffered a stroke, a failed kidney and a broken pelvis.

The family has suggested that the imprisoned scholars in Saudi could be released soon according to sources inside the prisons as well as “government advisors”. However, the family stressed that Sheikh al-Hawali may be the last to be released as a result of the book which he published.

The Saudi authorities have arrested scores of scholars and activists in what is seen as a significant shift in internal policy led by Crown-Prince Mohammad bin Salman. The measures have been dubbed by some as a precursor to introducing more secular-leaning laws. [6]

The disappearance and evident brutal murder of journalist Jamal Khashoggi continues to dominate headlines around the globe as pressure continues to grow on the Saudi authorities surrounding the case. Some suggest that one result of the pressure faced is to review some of the repressive policies put in place by the Crown Prince.