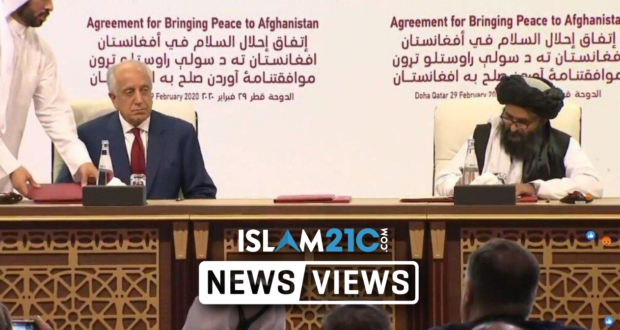 Breaking: US and Taliban sign historic deal to end war in Afghanistan

The United States have signed a landmark peace deal with the Taliban to end the 18-years-long war in Afghanistan. [1]

The peace deal which has been signed in the Qatari capital, Doha, comes after nearly two years of protracted negotiations and will pave the way for the complete withdrawal of US forces from Afghanistan.

The deal, which was signed by the two parties on Saturday and aims to end the US’s longest war, comes a week after the “reduction in violence” (RIV) agreement announced by the US and the Taliban.

A joint statement was released by the US and the Afghan government just minutes before the deal was signed. The statement said that NATO and US troops would withdraw from Afghanistan within 14 months.

There are around 14,000 US troops as well as around 17,000 NATO troops from 39 NATO allies and partner countries stationed in the country.

It further added that the Afghan government will engage with the United Nations Security Council “to remove Taliban members from sanctions list by May 29”.

On Saturday, the Taliban also ordered all its fighters to halt fighting and “refrain from attacks”. A Taliban representative in Doha, Mohammed Naeem has described the deal as “a step forward” and that with the “deal comes the end of war in Afghanistan,”

The landmark deal in Doha will now allow for intra-Afghan talks to take place between the Taliban and key Afghan stakeholders. This also includes the country’s Western-backed government.

Analysts, however, feel that there are still some challenges in forming peace, calling the peace deal a “pre-agreement”.

Andrew Watkins, a senior analyst on Afghanistan at the International Crisis Group, said:

“It is important to note that the agreement that will likely be signed on February 29 between the Taliban and the US is not a peace deal.

“Instead, this is the result of a precursor phase of the Afghan peace process, one that was necessary to bring the Taliban to the table with the Afghan government and political leadership for a substantive dialogue.”

“The US-Taliban deal should be seen as having provided a window, or opportunity, for a political settlement and peaceful end to the conflict. But so much work towards that end remains to be done.”

Afghanistan’s infrastructure and economy is in ruins due to on-going severe instability and war, which has consequently resulted in the deaths of many and countless others have been forced to become refugees. Many people have welcomed the peace deal as it now opens a new chapter for the Taliban as well as the future of Afghanistan.

Nearly three years ago, Gulbuddin Hekmatyar, the leader of the the second largest rebel group in the country and political party Hezb-i-Islami, also signed a landmark peace deal on behalf of his group with the Afghan government.

The deal allowed for Hekmatyar to return to Afghanistan after two decades in exile. [2]He has since called for peace and reconciliation, demanded the withdrawal of foreign forces, and called for fair and transparent elections.

The United Nations lifted sanctions against Hekmatyar subsequent to a decision made by the UN Security Council to remove Hekmatyar from the UN ‘terrorist’ blacklist. [3]

In a bid to bring about a peaceful solution in the country, the 25-point pact provided Hekmatyar and his members with amnesty and granted them full political rights. It also recognised the Hezb-i-Islami organisation as a political party, and allowed for the release of some of its prisoners. As part of the deal, Hekmatyar and his party agreed to accept the constitution, abandon fighting, and encourage others to do the same. [4]

Although this recent peace deal is a step in the right direction that many Afghans have been long awaiting, analysts say that the talks could take months as a result of major disagreements over several issues between President Ashraf Ghani and the Chief Executive Abdullah Abdullah.

With the rapidly changing political climate in Afghanistan, the peace deal is a sign of hope for many Afghans. Whether the agreements will bring about change, peace and security – only time will tell.