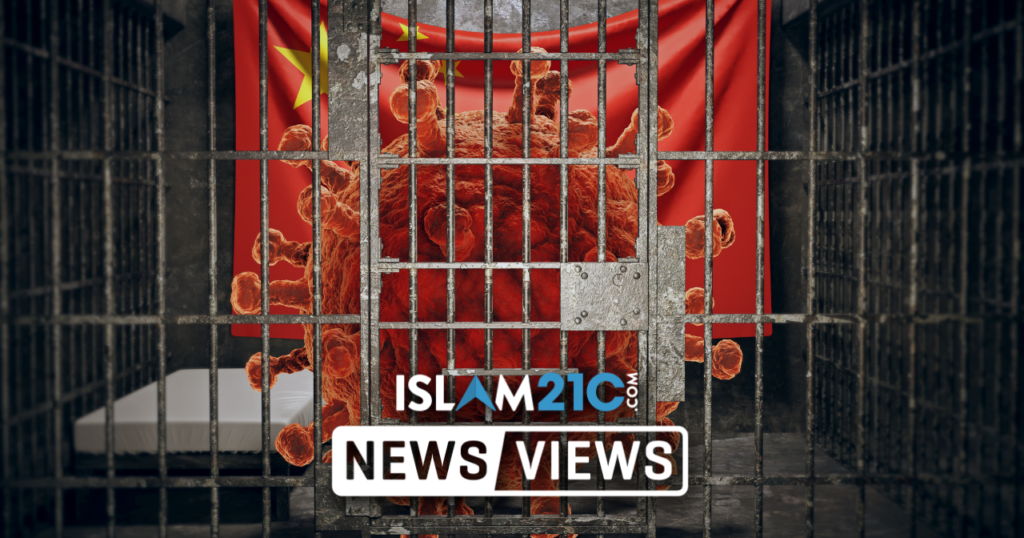 As the world is gripped with fear and the UK suffers its second fatality, some are looking to China for lessons learned on battling the coronavirus. China is a regime that is known for its treatment and wide scale systemic repression and persecution of Uyghur Muslims. Several human rights organisations and experts have raised concerns surrounding the Chinese government’s actions against the minority community.

With at least 1 million Muslim men and women in detention camps, together with 500,000 children in similar centres, concerns over the treatment of the minority group continue to rise, especially in light of the coronavirus. However, the Communist Party stooped to a new low by forcing Uyghurs to work in factories which had been closed due to the epidemic.[1]

Chinese state-run media Xinhua news agency reported in late February that 229 factories in Xinjiang had “resumed production in an orderly manner and more than 30,000 surplus labourers in the rural area have returned to work.”[2] The “surplus labourers” being code for Uyghurs.

Dr. Ferhat Bilgin, a Uyghur American commented: “Jailing, torturing and killing those members of the population who could resist, effectively breaking the spine of the nation, then use the rest for whatever purpose they see fit. Many Chinese are refusing to return to work because of the Coronavirus. Now the State is sending these poor Uyghurs to work. If they survive they produce a profit, if they die, that would be “too bad.” For the first time in history, Uyghurs has [SIC] become commodities of the State.”[3]

Whilst official Chinese statements maintain that the country is gaining control over the virus, little – if any – information is being provided about the 1 million Muslim Uyghur incarcerated in prisons.

Concern over these Muslim inmates is especially acute given that prisons are a fertile petri dish for virus transmission. Already malnourished from a severe shortage of food, together with being subjected to forced labour, many prison internees are particularly vulnerable to the deadly virus.

“You aren’t going to see bottles of Purell (a type of hand sanitiser). You’re going to see people existing very close together, which aids transmission.”

Brown suggested the closest comparator to prisons would be cruise ships where large populations living in close quarters have facilitated a ferocious spread of the virus.

Faecal transmission is another concern in detention centres. It is understood that the virus survives on surfaces and some scientists are concerned that significant contagion spread will occur in shared bathroom settings, such as those in Uyghur detention centres.[4]

Dr. Michael Callahan, an infectious disease doctor based in the USA, stated that faecal transmission is an “occasionally dramatic accelerator in coronavirus outbreaks.”  With more testimony from inmates who have been released from Uyghur detention centres about the conditions within such camps, there is a palpable fear that Covid-19 will spread like wildfire through the prisons.

Such evidence include statements from Mihrigul Tursun, who was first detained in 2015 while visiting her parents near the city of Urumchi and consequently spent a total of 13 months in a detention camp. The Muslim woman was prohibited from showering or changing her clothes for months at a time.

Mihrigul Tursun shared a jail with other women where they were required to relieve themselves into a bucket whilst being recorded by CCTV under the watchful gaze of guards.[5]

Providing further insight, Sister Mihrigul detailed how 60 women shared a single cell which was so crowded that inmates needing to sleep in shifts as others stood. The jails were sealed except for an inlet which was opened for a couple of hours a day to allow air into the cell. Women were only provided with bread after enthusiastically chanting praise for the Communist Party and Xi Jingping. The Muslim Uyghur woman said:

“In the camp, there’s a lot of sickness. We were never allowed to get proper medical care. And now that the coronavirus is coming out, I’m very worried that people are dying.”[6]

There are other Muslim Uyghurs who have been fortunate enough to have been spared imprisonment, but are still treated with brutality by the Chinese authorities. Such cruel and inhumane treatment include Chinese officials forcing millions of Uyghur residents of Xinjiang into home quarantine, without any notice or allowance to buy food or essential supplies. The resultant starvation was predictable. There have been many heart-wrenching videos of desperate pleas for help by Muslim Uyghurs which have been circulated via social media. In one such video, a young father shouts into the camera:

“I’m starving. My wife and children are starving.” He bangs his head into a pole and shouts, “Do you want to kill me? Just kill me.”[7]

In another video, an elderly man who is chased by a Chinese official for breaking the quarantine asks:

“What’s a person supposed to eat when they get hungry? What should I do, bite a building?”[8]

Experts from the WHO such as Bruce Aylward may praise the Chinese response to Covid-19, stating on a news briefing: “If I had COVID-19, I’d want to be treated in China.” Others such as Sophie Richardson, the China director at Human Rights Watch, reminded the world of the Uyghur plight: “It’s disturbing to hear international public health experts make broad remarks praising the Chinese government’s ability to quarantine extraordinary numbers of people. I hear that, and I think, ‘That’s precisely the extraordinary degree of control that they use to arbitrarily detain 1 million people.’ Let’s be a little bit more nuanced and thoughtful about human rights violations before lavishing on the praise.”[9]

If the coronavirus teaches us anything, it is that in a hyper-connected globalised world, what happens in one corner of the world cannot be ignored, no matter how powerful the aggressor. After all, who had heard of the city of Wuhan a few months ago?