A hugely uniting figure who held the honourable position of Mufti-e-Azam (Grand Mufti) of Pakistan, Shaykh Muhammad Rafi Usmani passed away at the age of 86 on Jumu'ah, 18 November, 2022
News Views 20/11/2022No Comments5 Mins ReadBy Shaheer Choudhury 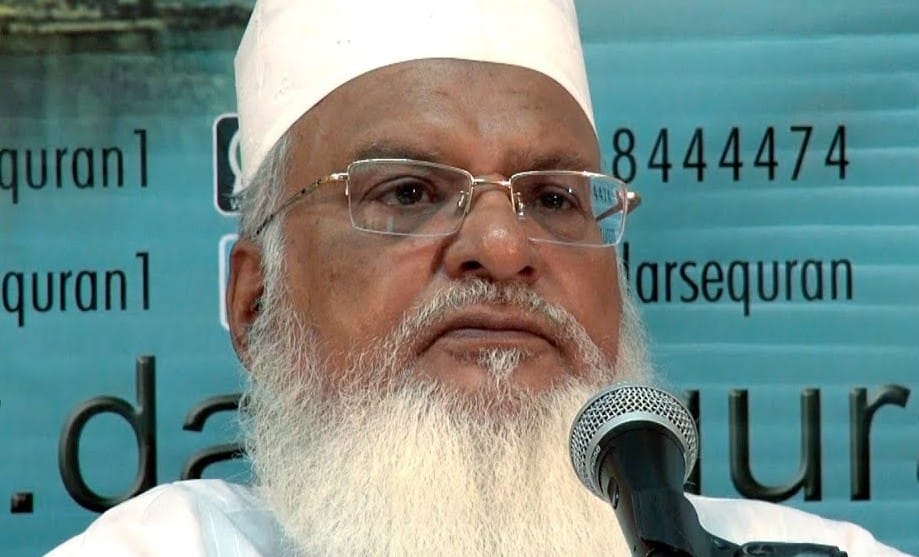 We share the deeply moving news of the passing of Mufti-e-Azam (Grand Mufti) of Pakistan, Shaykh Muhammad Rafi Usmani. The great scholar passed away at the age of 86, this past Jumu’ah. It is understood that Shaykh Muhammad had been experiencing a long period of illness and had never made a full recovery after he contracted COVID-19 in 2020. [1]

The late Islamic scholar, teacher, author, and jurist, Shaykh Muhammad Rafi Usmani (raḥimahu Allah), was a particularly unifying figure in Pakistan and around the world. Indeed, in his dual positions as Mufti-e-Azam of Pakistan from 1995 and 3rd President of Darul Uloom Karachi from 1986, he dedicated his life to the propagation of Islam.

In life, Shaykh Muhammad Rafi Usmani followed closely in the footsteps of his father, Shaykh Muhammad Shafi – the great scholar who also held the respected position of Mufti-e-Azam of Pakistan and was the founder and 1st President of Darul Uloom Karachi from 1951 to 1976.

Shaykh Muhammad’s family is filled with “a whole host of luminaries”, as Islam21c‘s History Editor, Ustadh Kashif Zakiuddin, states in the following remarks,

“I had the good fortune of attending one of Shaykh Muhammad Rafi Usmani’s talks, here in the UK. There was a strong emphasis on Muslim unity, steering away from sectarianism and showing love and mercy towards all Muslims.”

“Mufti Muhammad Rafi Usmani imbued this wise Ummah-centric approach from his father, the great scholar and also Chief Mufti of Pakistan, Shaykh Muhammad Shafi (raḥimahu Allah), who was the author of the popular book of tafsīr, Ma’ārif ul-Qur’ān.

“This noble family has not just produced three great scholars – Muhammad Rafi, Muhammad Taqi, and their father, Muhammad Shafi – but, indeed, a whole host of luminaries that make up the renowned Usmani family. Members of the family include Shabbir Ahmad Usmani, Zafar Ahmad Usmani, and Shaykh al-Hind Mahmud al-Hasan.”

In further remarks, the senior jurist and specialist in a number of Islamic sciences, Shaykh Dr. Haitham al-Haddad, said that the passing of Mufti-e-Azam Muhammad Rafi Usmani was “a great loss”. He also mentioned that the late scholar’s “entire family is a family of ilm, knowledge, and piety”.

“The passing of our shaykh, Muhammad Rafi Usmani – the son of Muhammad Shafi Usmani – was a great loss; may Allah (jalla wa a’lā) have rahma on all of them.

“I had the pleasure of meeting him, along with some du’āt from different countries, in Darul Uloom Karachi, in 1442/ January 2020. He gave us ijāzah in his book. May Allah (jalla wa a’lā) have rahma on him.”

The shaykh also noted that the loss of scholars is like a gaping hole in the religion of Islam that cannot be repaired:

“I would like to say that the loss of a scholar is as al-Hasan al-Basrī (raḥimahu Allahu ta a’lā) said: it is like having a hole in the body of Islam. That hole cannot be fixed. Moreover, when one of the scholars asked Sa’īd ibn Jubayr, ‘What is the sign of the destruction of people?’, he replied, ‘When their scholars pass away’. [2]

“Moreover, some of the scholars of tafsīr interpreted the word نقُصُ (“reducing”) from the following ayah to mean the death of scholars:

An amazing piece of knowledge

Shaykh Dr. Haitham al-Haddad also reflected on a particularly interesting segment of knowledge that he gained from the late scholar…

“I would like to put on record that I learned something from Muhammad Rafi Usmani. Subhān Allah. When we were visiting him, the adhān was being given and I politely asked him if we can keep quiet until the end (because maybe he did not hear the adhān). And he kept quiet.

“After the adhan, he told us something that is amazing. He said to us that one of the scholars – maybe one of his shuyūkh – told him that the Prophet (ﷺ) always makes du’ā for his Ummah, except during one time where the Prophet (ﷺ) asked his Ummah to make du’ā for him.

“And that is after the du’ā, because the Prophet (ﷺ) said, ‘When you hear the adhān … ask Allah (jalla wa a’lā) to grant me the rank of al-Wasīla, because it is a status in Jannah that should not be given to anyone apart from me.’ [4]

“So, why did the Prophet (ﷺ) ask the Ummah to make du’ā for him? This is because he knew that the du’ā immediately after the adhan is very likely to be answered. Therefore, the person should be very keen to make du’ā after the adhān.”

Shaykh Muhammad Rafi Usmani was a highly influential figure in the Muslim world. After his passing, his younger brother, Mufti Muhammad Waqi Usmani – who is the President of Wifaq ul-Madaris al-Arabia – led funeral prayers in the city of Karachi. [5]

A large congregation including the Governor of Sindh province, Kamran Tessori, and many more mourners prayed before the late scholar was buried in the grounds of Darul Uloom Karachi. The President of Pakistan, Arif Alvi, as well as Prime Minister Shehbaz Sharif, and other prominent political leaders have all offered their condolences. [5]