Turns out that alcohol isn’t needed to attend football matches! 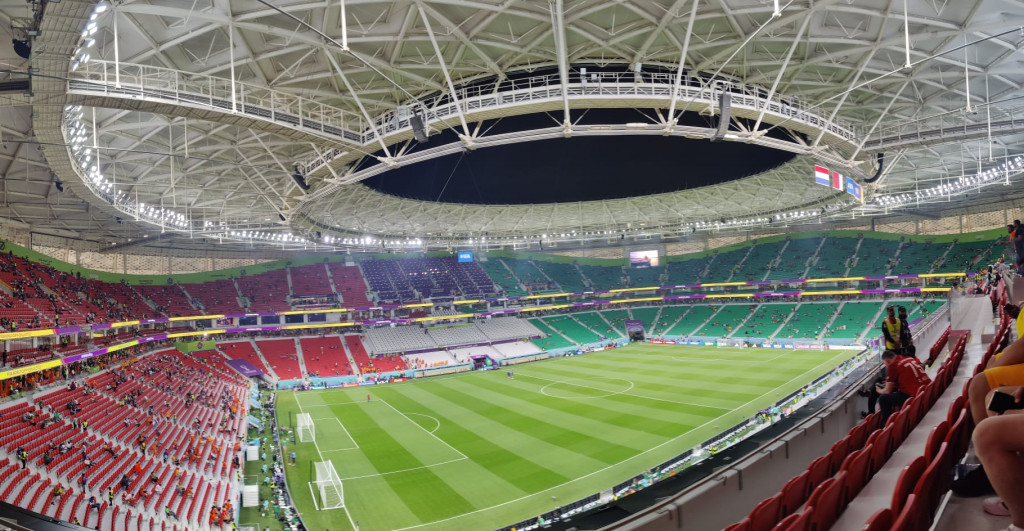 A panoramic evening shot of al-Thumama Stadium, one of the venues for the 2022 World Cup

On our first night in Qatar, we went to the Souq Waqif market. We took an Uber and our driver happened to be a Bangladeshi man who had been working in the Arabian Peninsula for a number of years. He realised we were Bengali and told us about some of the prime curry spots that many of the local workers attend.

As we drove up to the Souq, I could see the famous Spiral Mosque in the distance, illuminating the night sky. We entered the bustling marketplace, which is a mixture of traditional Qatari architecture and modern restaurants. I hadn’t yet prayed Maghrib, so I went to look for the masjid; I was guided by the helpers and made my way through the mass of people.

The first thing that caught my eye as I entered the prayer area was a brother who had wrapped a Moroccan flag around his waist as he prayed. It was truly beautiful seeing brothers from different parts of the world praying in the masjid. There were people there in Tunisian shirts and French shirts… oddly enough, someone wearing a Sri Lanka cricket top stood out to me.

Following prayer, I started to make my way to a restaurant and came across some Argentinean and Mexican fans.

The Mexican fans were wearing the traditional sombrero hats and were singing Cielito Lindo, which is sometimes known by its chorus of “Ay, ay, ay, ay, Canta y no llores” (translated as “Ay, ay, ay, ay, Sing, and don’t cry”). They were competing with Argentina fans who were chanting “Argentina” and “Messi-tina”.

“It turns out that fans can enjoy the World Cup without being tanked up on alcohol.”

While alcohol is being sold in Qatar, the Qataris ironically had a “hold my beer” moment by taking the “controversial” decision to not make alcohol available at stadiums.

I’ve never understood why alcohol is needed to enjoy football; surely, a lowering of inhibitions will not allow you to appreciate the talent on the pitch? At any rate, this isn’t the first time alcohol has been banned at games; France stopped selling alcohol near match venues at the Euro 2016, after violence erupted between Russian and English fans.

Anyhow, I made my way to the famed Damasca One restaurant, where my brothers were already seated. Since it was a hot night, we decided to eat outside the restaurant. There were streams of people walking past as we waited for our food.

We sat down for an authentic Syrian meal of chicken liver, hummus, and mixed grills of chicken and lamb. My eldest brother is a bit of a foodie and was mighty impressed with the hummus. In fairness, it was seasoned well and topped with cashews, which added texture and crunch. Our server was hospitable and was always ready with another serving of complementary bread.

The next morning, we checked out of our hotel. While checkout time was supposed to be midday, we spoke to the concierge and asked her to delay it to 2 PM, which she readily accommodated. The reason we wanted a later checkout was that our apartment check-in time was 3 PM.

During our journey to the new place, I heard the Qur’ān being played in certain parts of the city; it was a pleasant surprise.

On arrival, we were greeted by a receptionist who helped us check in and then took us to our place. We then settled into the new apartment – the place that would be our home for the remainder of our stay. The flat came with four beds in two bedrooms, two bathrooms, a kitchen with all the necessary equipment, and a medium-sized lounge-cum-dining area.

In the evening, we went to one of Doha’s malls and did some grocery shopping for our accommodation. The mall was full of well-known Western brands, from Adidas to Starbucks. My brothers and I did the clichéd thing for dinner by eating at a well-known fast food place, simply because it was serving halal meals, whereas back home it doesn’t. The hype did not live up to expectations. I’ve had better burgers elsewhere. But I had to get it out of my system and try it at least once!

The next morning, we went to the Corniche Waterfront. We used the Metro System to get there. It was my first time using the Metro in Qatar – a newly built transport system for the World Cup that opened in 2019.

The Metro stations were air conditioned, as were the trains themselves. My usage of the Metro System was a change from my experiences on the London Underground. The Underground is a stuffy, poorly ventilated place at the best of times; it is unbearable on those sweltering summer days. Anyone who’s travelled in London will tell you that going from the heat outside to use the Underground is like going from the pan and into the fire, especially at stations like Bank.

We ate at the Al Mourjan Restaurant, sharing a breakfast platter consisting of mixed olives, tomatoes, cucumbers, hamsa meat, falafel, halloumi, and aubergines. The aubergines were particularly rich in flavour, coming mixed with cumin yoghurt, sprinkled with almonds and pomegranate. While we had breakfast at 9 AM, it was already baking hot. We ate whilst overlooking the sprawling Qatari skyline next to the sea. The cool ocean breeze helped with the heat.

I had an interesting discussion with one of the assistants at the train station when we were travelling back to our apartment. His name was Ahmed, a young student from Mumbai, India. Ahmed told me he was in Qatar for six weeks during the tournament to build his CV as he had applied to undertake an MBA at the University of Chicago. I hope he gets in and is a success there. I didn’t even ask him this, but he was telling me how he gets paid to assist people, and is given free travel on the Metro, food and accommodation.

We made our way back to our flat and waited for the actual tournament to kick off later on that evening. There were some familiar faces fronting the coverage on Qatari television, namely broadcasting duo Richard Keys and Andy Gray. In the studio with them was current Sky Sports pundit, Gary Neville, and former England captain, John Terry.

So I watched the opening ceremony with my siblings, but I don’t normally watch the opening ceremonies of major tournaments because I do not care for the pomp and circumstance. I just want to get to the football and usually see the ceremony as another obstacle to the reason why I came to the World Cup in the first place. However, I heard that there would be Qur’ānic ayāt recited and wanted to see how it would be used.

“Who better than to have Freeman to give his deep, reassuring voice to proceedings and welcome the Western world to the Middle East.”

“O mankind! Indeed, We created you from a male and a female, and made you into peoples and tribes so that you may get to know one another. Surely, the most noble of you in the sight of Allah is the most righteous among you. Allah is truly All-Knowing, All-Aware.” [1]

It was during this time, that I realised I wasn’t receiving any messages from brothers back home.

While a message of friendship was being broadcast to the world, people from Luton to London and elsewhere in the UK were not seeing this. It turned out that the BBC decided not to broadcast the opening ceremony on TV. They decided to start their coverage after the opening ceremony had ended, so I was providing updates to brothers.

In my lifetime, I’ve never known an opening ceremony to not be broadcast; it goes back to what I said in my first post, it seems that certain people want this World Cup to fail.

Monday is match day for my brothers and me; we’re off to watch Senegal vs. the Netherlands. I’ll end today’s post with what Gary Neville said on Bein Sports‘ broadcast: