Are you ready for our first ever NATIONAL CAMPAIGN?
Home / News / Coronavirus: UK mosque turned into hospice to aid efforts against pandemic 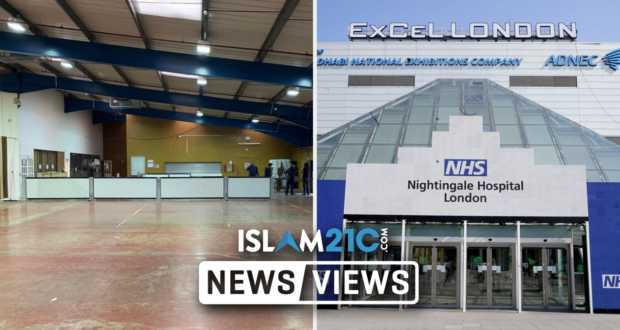 A mosque in Bolton is being transformed into a hospice to help patients afflicted with coronavirus in their recovery. The Masjid located in the northern industrial town had plans to be converted into a 55-bed hospice for end-of-life patients.

Dr Mohammed Jiva, medical officer for the mosque, rallied his community after seeing public venues across the UK being been turned into temporary hospitals and morgues to help cope with the ever-growing number of cases and deaths due to the coronavirus.

He contacted his colleagues at Bolton Hospital, namely Dr Zahid Chauhan OBE, Dr Sharif Uddin, and Dr Rauf Munshi, asking if it would be possible to utilise the mosque’s large hall as a hospice facility.[1]

“The mosque has a large hall used for weddings and events, which would be just sitting there…as the mosque’s medical officer, and seeing what is happening at the Excel and GMEX conference centres, I knew here in Bolton we would still have a major issue of how we look after the ill…the local hospital will struggle as to where we can place end-of-life patients. I spoke to consultants at Bolton Hospital and another GP. We came together to look at how to turn the site into end of life care and to offer a 24/7 package of care…we put out a call for volunteers and got a great response with more than 60 people, both young and old offering, to help. Local dentists are helping to run the infection and control side.”

Dr Jiva expects to see the first patients coming into the mosque in the next two weeks, although doctors are still looking for volunteers to help facilitate plans going forward.

“We need builders’ merchants to help us with the materials that will enable us to section off each compartment so the patients have dignity…it’s important, as we do not want patients seeing the person in the next bed dying. It will be staffed by local GPs.”

Furthermore, the Bolton Council of Mosques is supporting the initiative, with one of its trustees, Said Mohammed Akuji, stating:

“Straight away we thought it was a fantastic idea and a great way to give back to the community…we thought: ‘how can we utilise this rather than just leaving it as it is, especially at a time when we really need something like this’…it’s our way to help everybody in the community.”

Prince Charles, who recently recovered from the illness, praised initiatives like this and all the volunteers involved, describing their actions as “truly wonderful”.

He said in a video:

“It has been so wonderful to see just how many across the UK have signed up in their hundreds and thousands to be NHS volunteers, offering their help to do whatever they can to provide support to those on the frontline.”[2]

Meanwhile in London, Abu Dhabi-based owners of London’s Excel centre have performed a dramatic U-turn after it was revealed they were charging the NHS between £2-£3 million to use it as a hospital to treat coronavirus patients, despite making £31million profit before tax last year.[3]

The exhibition centre has now been converted into the Nightingale Hospital in record time as health workers and the British Army worked together to build the vast complex.

However, according to reports, the health service was being whacked with a multi-million-pound bill for use of the centre after reportedly being ‘desperate’ to secure a big venue. In contrast, Birmingham’s NEC, which is also being transformed into an NHS Nightingale hospital, has not charged the NHS for use of their facility.

In a dramatic turn of events, the company has said they “will not charge a penny” for the use of their facilities.

Humaid Matar Al-Dhaheri, Managing Director and Group Chief Executive of ADNEC, who own the London-based centre, said, “To be clear, profit has always been the furthest thing from our minds.”

“Like the rest of the country, we want to help in any way we can during this crisis…this includes putting the entire NEC facility at the disposal of the NHS for as long as it needs it.”

2020-04-06
Hamza Saleem
Previous: Coronavirus: European mosques call to prayer in solidarity during crisis
Next: Coronavirus: Through the lens of a Quranic parable