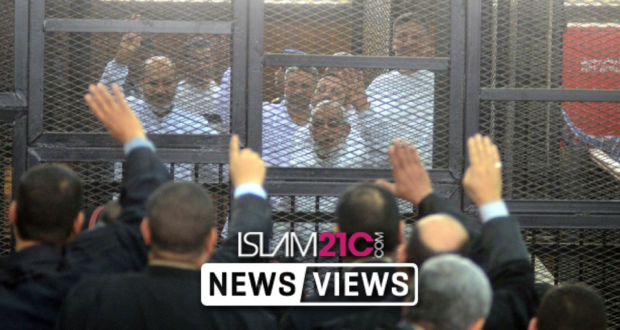 75 Egyptians have been sentenced to death by a Cairo court for their alleged part in the 2013 sit-in demonstration against the military’s coup against the democratically-elected President, Mohammed Morsi.[1] The 75 included some senior members of the Muslim Brotherhood organisation who have been outlawed and subjected to a viscous crackdown ever since the coup.

The trial relates to the peaceful demonstrations which took place at Rabaa al-Adawiya Square in the weeks following Field Marshall Abdel Fattah al-Sisi’s coup. Thousands of civilians had gathered at the site, as well as at another smaller square, demanding justice from the regime, only to be brutally attacked by security forces on the 14 August 2013. Human Rights Watch (HRW) reported at least 817 were murdered in cold blood,[2] whilst acknowledging the real figure is more likely to be above 1,000; with approximately 4,000 more injured. Some of the corpses were said to be unrecognisable as bodies were burnt until their bodies were charred black.[3]

Describing the incident at the time, a senior HRW representative called the massacre a crime against humanity, and said:

“In Rab’a Square, Egyptian security forces carried out one of the world’s largest killings of demonstrators in a single day in recent history. This wasn’t merely a case of excessive force or poor training. It was a violent crackdown planned at the highest levels of the Egyptian government. Many of the same officials are still in power in Egypt, and have a lot to answer for.” [4]

Police detained more than 800 survivors and allegedly tortured and beat a number of them in the ensuing weeks and months.[5] They have been subject to a series of mass trials since then, which have been lambasted by rights groups for their extreme lack of fairness. The recent sentencing comes on the back of a mass trial of over 700, including a journalist who was merely taking photographs at the time.

“The idea that more than 700 people could all stand trial together in one day, all facing the death penalty in what is clearly a grossly unfair trial that violates Egypt’s own constitution, beggars belief.

“This can only be described as a parody of justice; it casts a dark shadow over the integrity of Egypt’s entire system of justice and makes a mockery of due process.” [6]

Another Amnesty International representative, Husain Baoumi, described the court’s decision as “shocking” and “completely unfair”, pointing out that not a single member of the regime’s security forces have been held to account.[7]

“I think it’s very clear that the judiciary has been heavily politicised, the accusation list is ludicrous and it’s very hard to actually prove. It’s not the only case where clear biases have been shown.” [8]

The verdict has now been referred to the Grand Mufti, who is consulted before any death sentences are carried out. Although his view is non-binding, it is rarely ignored.[9] However, being an employee of the state, he very rarely opposes any of the court’s verdicts.

The final verdict is expected in early September.

2018-07-31
Abdullah Izzadin
Previous: Whilst the Establishment are away, people power takes a lead on Brexit
Next: Saudi scholar Sh Abd Al-Aziz Fawzan reportedly arrested over a tweet

Coronavirus: Everything you need to know