Whilst the Establishment are away, people power takes a lead on Brexit 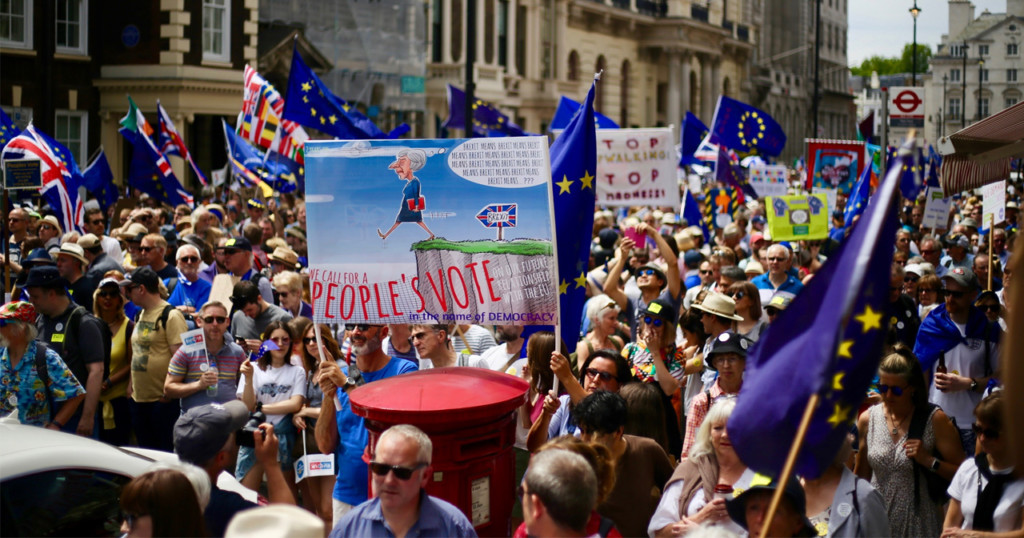 Last week the Westminster elite ran to their holidays and will not be returning to work until September. Whilst they are holidaying, ordinary people will still be worried about Brexit and its effect on their lives. A lack of meaningful dialogue and reports of stockpiling of food and medicine in a ‘No Deal’ scenario only exacerbate their genuine concerns.

It is clear this government is out of ideas and quickly running out of time. In a last-ditch attempt to sell their Chequers car crash deal, Theresa May and her Cabinet have been touring Europe to try and convince other EU leaders of the merits of their deal.

With the Labour Party wargaming for a possible General Election and the Tories plotting throughout the summer to oust the Prime Minister in the autumn, those who will be most affected by Brexit are left in limbo, having to wait and see what developments occur.

It is time to take to the People’s Vote campaign onto the streets this summer. The Summer of Action is taking place across the U.K. and will involve multiple rallies in a number of cities across seven different nations and regions throughout the months of August and September. The Summer of Action moves away from the Westminster and London-centric bubble and goes out onto the streets, into the communities that have the most to lose from Brexit and continuing the clear momentum the People’s Vote Campaign has gathered in recent weeks.

People up and down the country are united in their rejection of the botched Brexit on offer. A choice between a bad Brexit deal and a no-deal Brexit is a false choice. There is no good Brexit on offer which is why we need a people’s vote on any deal that Parliament considers.

Polling conducted a couple of weeks ago by YouGov showed that if a second referendum was held, remaining in the EU would beat leaving with no deal by 54 per cent to 46. [1] A recent Sky Data poll showed 50% of people were in favour of a public vote on the final Brexit deal, with an option to remain with only 40% opposed. [2] The peoples vote petition is increasing in signatures – and has amassed on average, 8,000 signatures every day since launching just over a month ago! [3] The Independent have formally come out in support of a final say for the people on Brexit and their petition amassed a quarter of a million signatures just 36 hours after launching and now has over 380,000 signatures in less than a week. [4] With so much activity, politicians are left with little option but to hear the ever-louder demand – from all walks of life and every corner of the country – for a democratic say on any final Brexit deal.

This clearly shows the will of the people has changed and will continue to change as the realities of Brexit are discovered. The ‘have your cake and eat it’ Brexit, the ‘Global Britain’ Brexit, the ‘taking back our borders’ Brexit – these were all lies that were fed to the people during the referendum.

In an interview the weekend before last, chief Brextremist Jacob Rees-Mogg said the full impact of Brexit will not be known for “years to come” – revealing the full benefits will only be felt after 50 years. When asked if he would resign as an MP next year if the economy is harmed by Brexit, he refused to say so. [5] It seems that the elite are happy to gamble with our futures but aren’t willing to stake their own.

Now the Brexiteers have ditched their arguments for Brexit and seem to be blaming everyone but themselves. Apparently, the EU are to blame for insisting they will not compromise on their founding principles, any MPs who question and scrutinise Brexit are seen as enemies and a fifth column, and businesses who express concern about Brexit are designated scare-mongers and dismissed outright.

The Government released their Withdrawal and Implementation Bill which aimed to set out the withdrawal agreement the U.K. hopes to sign with the EU later this year. However, the piece of legislation was an attempt to walk back legislation the Government passed only weeks ago themselves.

The document makes it clear that if we get a deal, we will be subject to EU rules and regulations for years to come due to the proposed 21-month extension of the European Communities Act 1972, at the cost of tens of billions of pounds, but without any influence over how those rules are made and in return for a worse relationship than we have already. The result? A Brexit that would satisfy no-one and would deliver us the worse of both worlds.

A no deal Brexit was once unthinkable but is now spoken about as a possible likely outcome. Let me be clear – this would be disastrous for those who are not wealthy or part of the elite. As if austerity was not hard enough, Brexit will make things even worse. It is about time we call for these political choices to stop as it disproportionately affects minorities including Muslims.

Brexit is bigger than party politics, it is bigger than rhetoric – it is the lives of men and women across the U.K. at risk from a bad Brexit deal and their voices cannot be ignored – especially on the biggest issue affecting us for a generation.

It is time the people of this country are let back into the Brexit process and demand their right to a People’s Vote on the final Brexit deal.