Are you ready for our first ever NATIONAL CAMPAIGN?
Home / News / Egypt votes in “one million per cent democratic” election 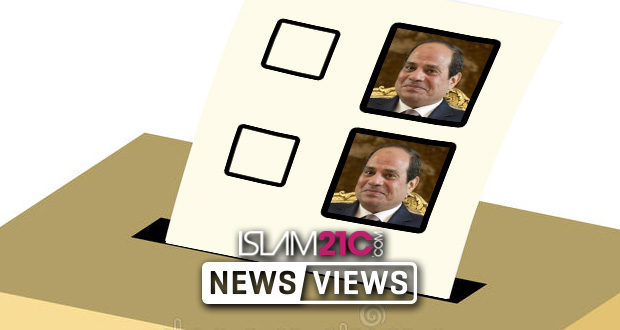 Egypt votes in “one million per cent democratic” election

Polls closed as the world bites its fingers in anticipation of who will win Egypt’s presidential election. Nearly 60 million eligible voters were told they would be fined 500 Egyptian pounds and that their non-participation would reflect on their academic grades in the event of their abstention. In the one-of-a-kind election, coup authorities went above and beyond, promising participants money, food and services, and ensuring the stick is fairly balanced with the carrot.[1] ‘Maha’, one of the voters, whose name was hidden to protect her from being persecuted told Al Jazeera,

“I’d rather pay the [fine] because I don’t think it is worth wasting hours of my day. This is more of a referendum than an election.”[2]

Incumbent coup leader, Abdel Fattah el-Sisi went head-to-head against last-minute candidate Moussa Mustafa Moussa, mystifyingly a pro-Sisi campaigner. Moussa removed an idolised picture of his endorsed competitor from his Facebook profile moments before his candidacy,[3] and miraculously after announcing his intention to run. 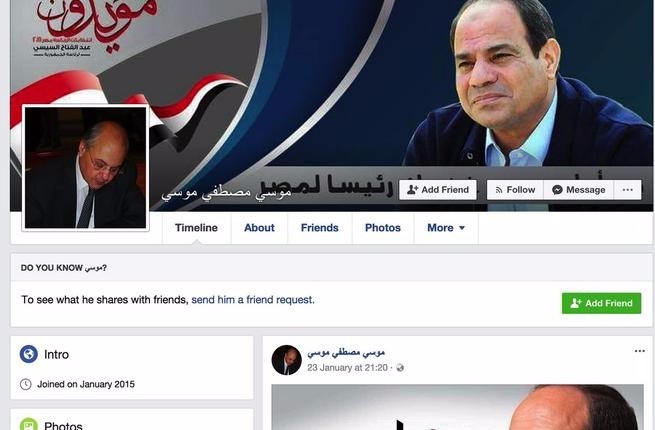 The free and democratised election, dubbed by social media activists more like a ‘referendum’ to sample how many people actually back the military stooge, comes after the arrest of all credible presidential competitors, including former Chief of Staff Lieutenant General Sami Anan and the smearing of Ahmad Shafiq who later pulled out.[4] Headed for an entirely single-man race, a suitable catalyst or ‘hinge’ for the ‘election’ to become valid (at least lexically) seems to have resulted in Moussa’s dramatising as Sisi’s challenger.

Under the Arabic hashtag “he sold it and you call them elections” activists tweeted,

“He sold the nation, he sold the land to a gang of traitors, rather mercenaries. If you are an Egyptian struggling to prove that you own yourself, rest assured that you are a worthless slave” (under the Sisi regime). Whilst others tweeted “millions of (Egyptian) pounds have been spent on useless pseudo-elections, the result of which is guaranteed to go to Sisi.”[5]

Satirical ballots created by activists mocked that Egyptians are being afforded the free choice between “Yes – I select Sisi”, and “No – I select no one but Sisi”,[6] were posted in various polling stations littered around Egypt, with some seeing crowds of a lonely voter every half an hour.[7]

Satirical ballot paper that reads: “YES – I elect Sisi and NO – I elect no one but Sisi.”

Initial results from the election which represents a “one million per cent democratic process” according to a spokeswoman for the Sisi campaign,[8] suggest that Sisi has secured almost 97% of the vote.[9] A result so expected that it raises questions around the soundness of the 3% share won by Moussa; could there have been tampering on part Moussa’s campaigners? In either case, it is not clear who Moussa himself voted for, particularly after having staunchly stood behind Sisi and not once criticising him in the run up to this very election and throughout.[10] 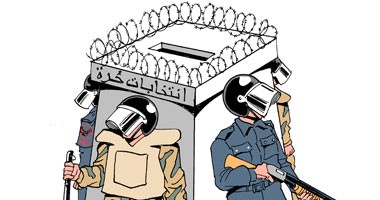 It remains a mystery why Sisi needed a ballot ‘mandate’ after having ascended to power using the bullet. Sisi overthrew Egypt’s only democratically elected leader in 2012, instructed the massacre of thousands of his followers and now more than 60,000 political prisoners languish in jail. With six-times more ‘opposition’ incarcerated than in the days of the 90%+ electoral high-flyer Hosni Mubarak, some see it strange for Sisi to need not a ballot-box ‘mandate’ to tickle his ego or soothe his psychological insecurities. Others question whether the ‘ballot’ will be what inevitably brings change to Egypt or indeed something else.

2018-03-29
Ahmed Hammuda
Previous: Good news: undercover “investigations” against Muslims are beyond silly now
Next: A World in Disarray; Still No Accountability