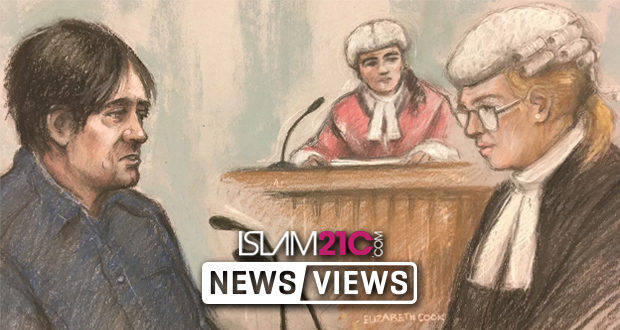 Finsbury Park attacker in court claims “Dave did it”

Darren Osborne, the man accused and caught in the midst of a terror attack in Finsbury Park last year, has concluded submitting his defence in his ongoing trial. He named his friend “Dave” as the driver of the vehicle which rammed into Muslim worshippers outside a mosque. This is despite the fact that Dave was neither mentioned nor seen at the time by witnesses or CCTV footage.

In an extraordinary exchange, the defendant’s account was labelled “absurd” as the terror suspect stuck by his altered story; suggesting that Dave took the wheel of the van whilst he hid in the footwell and then “vanished” after the attack.[1] This version of events is in stark contrast to his statement immediately after the attack, when he confirmed that he was driving, initially claiming to have lost control of the van.[2]

The trial, which began on the 22nd of January 2018, relates to the London attack in June of last year, when a van was driven into a crowd of worshippers outside a Masjid in Finsbury Park after night prayers during Ramadan. The attack killed one and injured several others.

Darren Osborne was apprehended by survivors of the attack, whilst reportedly shouting “I’m going to kill Muslims”[3] and was heroically protected from any immediate retaliation by an imam from the mosque,[4] until the police arrived.

The court was presented with Osborne’s handwritten note found at the time, in which he berates Mayor of London Sadiq Khan and leader of the opposition Jeremy Corbyn. The note accuses the latter of being a ‘terrorist sympathiser’ – a label infamously used by former Tory Prime Minister David Cameron, [5] which appears to have been subsequently capitalised-on by the far-right to spread their hateful ideology.

In the weekend before the attack, it was reported that he told a soldier in the pub,

“I’m going to kill all the Muslims, Muslims are all terrorists. Your families are all going to be Muslim. I’m going to take it into my own hands.”[7]

Fuelled by Islamophobic hatred and apparently inspired by right-wing ideology and stereotypes, the suspect is said to have subsequently hired a van and drive to London with the intention of targeting a peaceful anti-occupation protest, only to find road access to those protestors restricted.

The court heard that the attacker hoped to kill Jeremy Corbyn and it would be “even better” if London Mayor Sadiq Khan was targeted as well.[8] With no access to the protest, he instead headed to Mr Corbyn’s constituency where he allegedly carried out the unprovoked violent attack.

The trial continues, with concluding statements from the prosecution and defence expected this week.