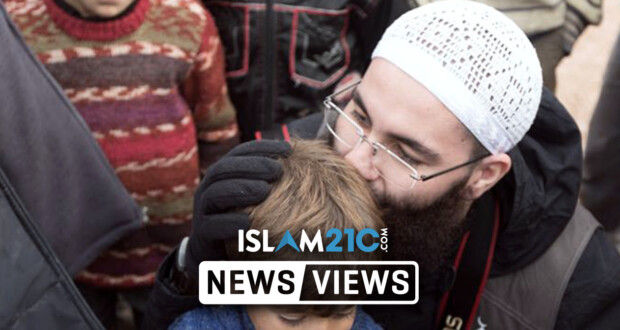 An elite force of French riot police sent to quash prison riots and hostage situations have raided the home of Idriss Sihamedi, president of the Muslim charity BarakaCity.[1]

In a statement, BarakaCity said that “Idriss was severely beaten by a police officer who pressed his head against tiles when he did not resist and was cooperating.”[2] This severe treatment at his home also saw his wife handcuffed and insulted, and she was not allowed to wear her hijab. Their children were threatened and were forced to keep their hands in the air at all times. [3]

The raid and arrest took place after Sihamedi attempted to organise a united Muslim response to Macron’s attempts to control both the public and private beliefs of Muslims. The French Interior Minister also threatened Sihamedi, who was vocal about a known Islamophobe.

This was not an isolated incident. Many raids have taken place all over France after Macron’s Islamophobic speech accused Muslims of ‘separatism’. Macron said he hopes to free Islam in France from ‘foreign influences.’

"The targeting one of the country’s biggest Muslim charities, @Barakacity and its president #IdrissSihamedi, a vocal advocate for Muslim rights, sends a clear message that the state is on an open witch hunt of Islam and Muslims." – @Moazzam_Begg https://t.co/FY7zZFmmcw

Moazzam Begg, Outreach Director for CAGE, said, “The targeting of one of the country’s biggest charities, BarakaCity and its resident Idriss Sihamedi, who is a vocal advocate for Muslim rights, sends a clear a message that the state in on an open witch hunt of Islam and Muslims. In the absence of any meaningful charges we demand his immediate release.”

“BarakaCity and Sihamedi enjoy a wide spectrum of support from the Muslim community in France. Macron’s popularity is ailing and he is now pandering to the far-right to demonstrate his Islamophobic credentials for the upcoming presidential elections. Macron wants to surpass Marine Le Pen in his anti-Muslim rhetoric and policies. As a result, Muslims are the prime targets at the altar of his political ambitions.”

May Allāh, Al-Hakam (the Impartial Judge), protect Idriss Sihamedi and his family and all the Muslims around the world who are being unjustly treated at the hands of oppressors. Āmīn.