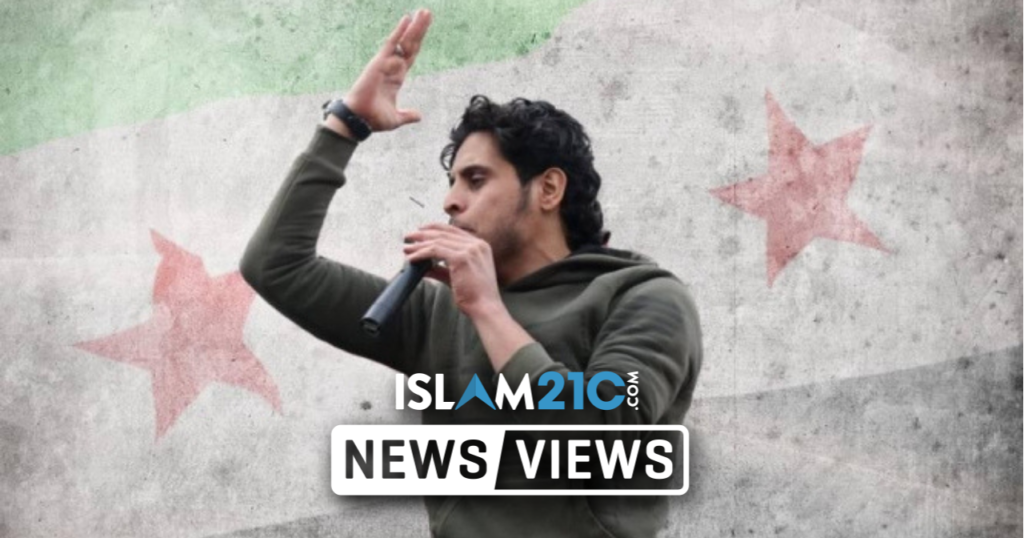 Hundreds attended the Janāzah prayer of Abdel-Basset al-Sarout (raḥimahu Allāhu), a former Syrian footballer who quickly became a well-known rebel icon during the Syrian revolution against the regime of Bashar al-Assad.

Abdel-Basset was born and raised in the Syrian city of Homs and became a goalkeeper for the country’s youth football team. At the young age of 19, Abdel-Basset joined peaceful protests to demand reforms and changes in the Syrian regime. [2]

Before taking up arms, when the Syrian uprising broke out in March 2011 Abdel-Basset became one of the revolution’s most popular singers. His popular anāshīds (“chants”) would move the masses who were attracted by his powerful words and mesmerising voice.

As the protests were greeted with violence and brutality, the civilian population, including the likes of Abdel-Basset, were forced to take up arms in defence against the Assad regime’s brutal crackdown.

Abdel-Basset also starred in an award-winning documentary titled The Return to Homs. The documentary tracks Abdel-Basset’s steps from his time as a Syrian football star to a protest leader and singer, and then a rebel fighter in order to liberate his homeland. [3]

The commander of the rebel faction, known as Jaish al-Izza, announced the death of Abdel-Basset via Twitter. Jameel al-Saleh described Abdul-Basset as a “martyr” that had died “fighting for the sake of Allāh”. [4]

Abdul-Basset’s father and four of his siblings have also died during the bloody eight-year war. They were killed during bombardment and clashes in their birthplace of Homs.

As well as Abdel-Basset, dozens of other rebel fighters were killed fighting in the ranks of Jaish al-Izza, after the area had become under a lethal attack by the Syrian regime.  The regime has been bombarding the region for the past few weeks.

Mahmoud al-Mahmoud, one of the other commanders of Jaish al-Izza, described Abdel-Basset as a “well-mannered young man” and “one of the fiercest fighters” he had ever known. [5]

Many Syrians, activists, and opposition figures took to social media to mourn the death of Abdel-Basset. One researcher and opposition supporter, Ahmad Abazeed said:

“The goalkeeper of freedom, the icon of Homs, the bard of the squares, the unforgettable sound of the Syrian revolution has been martyred.” [6]

Hadi al-Bahra said that “Sarout will remain alive…He died hoping to realise the dreams of Syrians”.

Following the death of Abdel-Basset, his mother shared some words of pain and hope. She said:

Abdel-Bassets martyrdom should give you strength!

Allāh takes the honoured ones to strengthen your resolve

Say that they killed our beloved brother. We must continue.

Of course, you must continue, my dear sons.

I advise you, my sons. Be jealous of Abdel-Basset.

Today he will go to Jannah, in shā’ Allāh.

Today he is with the angels of mercy. He is so lucky

May Allāh protect you and strengthen you. Avenge him, my dear sons.

Avenge the widows and orphans.

We are People of Truth.

They are People of Falsehood.

Allāh will give you victory

Through your unity and love.

Jannah is your objective.

Tell the youth that this world will perish;

We will not take anything from it.

My dear sons, tell the youth about my Syria

Do not lose it. With Allāh’s pleasure and your sincere struggle.

The background nashīd that Abdel-Basset can be heard singing is dedicated to his mother and she is dedicating the message to her son using the same word Ya Yuma, which is a local way of saying ‘my dear son’.

One of the most famous anāshīd that Abdel-Basset would be heard singing during his mass protests was “Jannah, Jannah, Jannah”.

By Allāh, my dear nation,

With the sweetest soil,

Even your fire is Jannah.

With your soil we quenched our thirst

And with your embrace we quenched our thirst.

To your earth, we yearned

And with your honour we were revered

To the heights we reached.

In our darkness you are a candle.

We will come to answer.

It has repented from fear.

We do not fear difficulties,

We do not know difficulty.

Heroes, ask about us

Homs, ask about us…

By Allāh, my dear nation,

With the sweetest soil,

Even your fire is Jannah.

“Among the believers are people who have always been true to what they have vowed before God. Some have already fulfilled their pledges by death, and some are still waiting. They have not changed in the least.” [7]

Commenting on this āyah, prominent Islamic thinker, Syed Qutb, says: “When we see ourselves weaken under stress, shaken by danger or worry at what lies ahead, we must not allow despair to overwhelm us, or feel that we are lost, unfit to achieve any high standard. What we must not do is hold on to our weak feelings thinking that this must be so because it happens o others who are better than ourselves. We must remember our bond with God and hold to this because it is through this that we can shed our weakness, and regain our confidence and reassurance. We should look at our worry and fear as a signal that help is on its way. Then we will find renewed strength and self-belief. It was such balance that moulded that unique generation in the early days of Islām.” [8]

A few years ago, Abdul-Basset was besieged in the city of Homs where he fought a fierce battle. During clashes Abdul-Basset became injured whilst some of his companions were killed. He underwent an urgent operation and after waking up from anaesthesia, the following was his response:

The Syrian Regime and its allies have sought to exterminate the remaining rebel-held enclaves, massacring civilians and trying to force the fighters into surrender.

Over 500,000 people have been killed in the ensuing violence, with many more being displaced. The Syrian regime, with the backing and support from its allies in Russia and Iran, has been able to militarily defeat opposition and rebel fighters, and are regaining territory that had been lost in previous years. In recent days, rebel fighters have been advancing in various areas such as in Northern Hama, where they have also captured enemy soldiers.