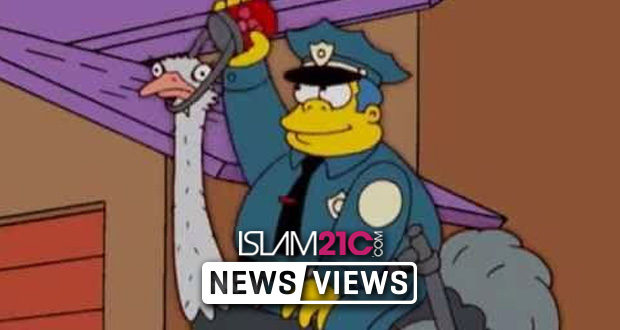 Good news: undercover “investigations” against Muslims are beyond silly now

Last night’s Dispatches programme left many disappointed, who were expecting something needing a serious rebuttal. Grassroots Muslim organisations and activists were yet again attacked in another failed attempt to smear their works, but this time many noticed a relative weakness compared to past attempts.

The documentary targeted and attempted to “smear a number of Muslim organisations and personalities”, [1] such as: MEND – Muslim Engagement & Development, CAGE and Imām Shakeel Begg of Lewisham Islamic Centre.

It did so by sending undercover reporters who carried out ‘secret recordings’ in the pursuit to expose and portray a concerning image of Muslim organisations and personalities; and to question whether or not they are the right people to speak for and represent British Muslims.

Independent advocacy group CAGE published a video response to the documentary in which Outreach director Moazzam Begg tells of a chilling story where an individual was recruited to carry out a ‘secret recording’ in the CAGE office. [2]

In response to the programme many organisations and prominent activists have condemned and strongly criticised those involved and put together detailed written responses to the production company’s accusations.

CAGE believes that the incident of an undercover recruit in the CAGE office was likely the same media company. In a response Director Dr Adnan Siddiqui stated:

“…we would like to raise an issue of concern that has been brought up by countless reports we’ve received concerning a media company we strongly suspect is your own, having a keen interest in ‘uncovering’ information about our Outreach Director…we would like to note that your and other journalists’ unethical techniques of “secret recordings” ostensibly in the name of “public interest” in fact place immense pressure on vulnerable people who may not be wise to the aims of agencies such as yours, who exploit their financial needs or aspirations, and pit them against their own communities.” [1]

To read CAGE’s detailed written response to accusations put forth, please click here and to read MEND’s rebuttal to the allegations presented in the programme click here to find out more.

The production company searched through many years of social media posts of current and former MEND volunteers. TV presenter John Ware claims that these posts are “… many past examples of overtly anti-Semitic comments on the social media of trained mend officials”. [3]

This has been seen as a cheap tactic to smear an entire organisation on the social media posts of a few volunteers (some of which date back to 2012), in order to make links to so-called “extremism” and anti-Semitism.

In a letter sent out to its supporters, MEND respond to the allegations in the programme with regards to volunteer social media posts, it stated:

“…quite often highlighting comments that were made when they weren’t even volunteers with MEND, or even before MEND existed! We, like other organisations with large numbers of volunteers, cannot be held responsible for the private posts of volunteers.” [4]

In addition, at no point in the entire documentary did John Ware interview any representatives from MEND or CAGE, highlighting a lack of balanced journalism and biased reporting.

Dr Adnan Siddiqui states in his letter addressed to the production company:

“Instead of employing underhanded methods in an attempt to sensationalise and criminalise what have been proven time and again in the face of intense state scrutiny to be perfectly legal organisations and opinions, we would like to invite you to adopt a more courageous approach. Please do consider meeting us and the other Muslim groups who are truly supported by the community face to face, and present the questions and information you have about us so that we may rectify inaccuracies and misunderstandings in person.” [1]

Despite an attempt to smear and attack the organisation, MEND insists that it will continue to work hard and persist in light of these allegations. On Facebook, it stated that,

“We at MEND would like to state very clearly that we will remain undeterred by efforts to malign our work. We want to see a future society where ourselves and our children are free from discrimination, marginalisation and bias, insha’Allah…We remain dedicated in our efforts to tackle Islamophobia and will continue to unapologetically work towards empowering our communities within political and media spaces.” [5] [6]

Imam Shakeel also responded to accusations presented in the documentary, in a written response he states:

“I categorically reject and I truly regret the gross unfairness of the allegations against me which disregard rationale, two decades of evidence to the contrary, and the judgement of countless Muslims and non-Muslims that I have worked so closely with for the last 20 years and continue to work with who know full well that the Judgment is a wholly incorrect representation of me.” [7]

“I will not be cowed by false characterisations, deliberate misrepresentations, or rest uneasy at the thought of a hidden camera upon the person of a ‘Muslim’ – I will continue to speak the truth in the defence of my community.” [7]

Previous: The Only Promise in Life
Next: Egypt votes in “one million per cent democratic” election