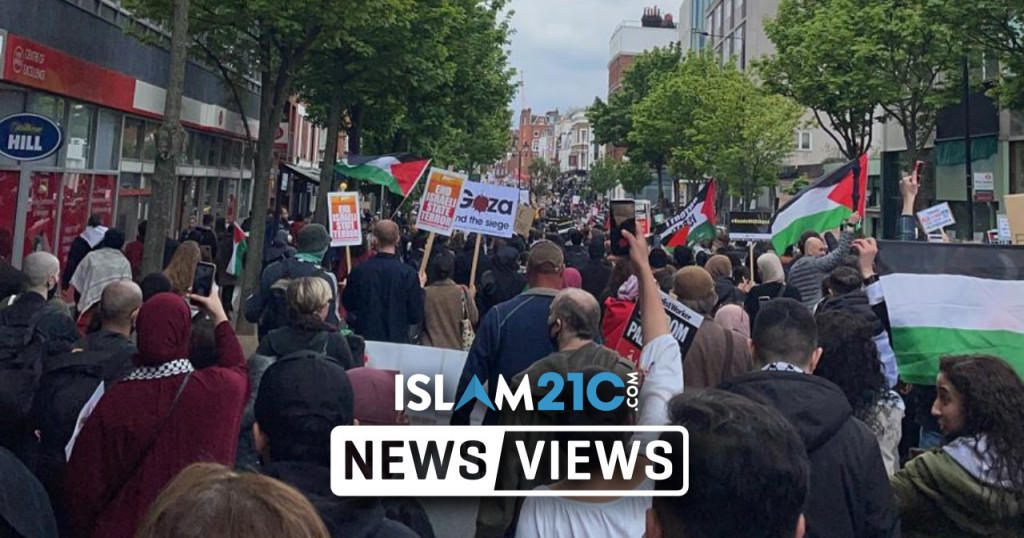 While the Zionist state of ‘Israel’ continues to pummel the beleaguered and defenceless Palestine with a relentless barrage of airstrikes on innocent civilians including children as young as six years old, [1] the world has welcomed popular rallies in support of Palestine, with thousands attending demonstrations in the Australian cities of Sydney and Melbourne, along with a reported 100,000 in attendance for London’s own Palestine march. [2] [3]

In Cape Town, Mandla Mandela – grandson of the late humanitarian icon Nelson Mandela –took part in Thursday’s pro-Palestine march, which saw numbers in excess of 2,000 rallying for Palestinians in a hugely symbolic demonstration. South Africa itself suffered from apartheid rule from 1948 to the early 1990s. [4]

Saturday’s march in London coincided with the 73rd anniversary of Nakba, which commemorates the Palestinian Catastrophe of 1948 when the end of the British Mandate for Palestine was declared, and hundreds of Palestinian villages were destroyed, hundreds of thousands of Palestinians were forced out of their homes, and the so-called State of Israel was established, thus destroying the entire fabric of Palestinian society in one fell swoop and beginning the decades-long struggle for freedom.

In London, the Muslim Association of Britain, the Stop the War Coalition, the Palestinian Forum in Britain, Palestine Solidarity Campaign, Friends of al-Aqsa, and the Campaign for Nuclear Disarmament all organised and led the blockbuster protest in the British capital in solidarity with the Palestinian people. [5] [6]

This is what 100,000 people on the streets of London looks like. #London4Palestine #Nakba73

Calling on people to assemble at Speakers’ Corner in Hyde Park at 12pm, then to march the roughly 1.7-mile journey towards the Israeli embassy in South Kensington, the event’s organisers drew attention to Israel’s attempts to wipe out the Palestinians from within their homeland. The immense crowd numbers paralysed major streets in London, with Tube stations overflowing and traffic held back as campaigners showed their unity with the Palestinians, despite the inclement weather.

Referring to the planned Sheikh Jarrah evictions by ‘Israel’ and the appalling al-Aqsa attacks of recent days, the Facebook event page emphasised:

“Israel is attempting to ethnically cleanse Palestinian families from their homes in Sheikh Jarrah, occupied Jerusalem.”

“As Palestinians protest in Jerusalem against these evictions, and Israel’s ongoing programme of ethnic cleansing, Israeli forces have responded with brutality, including an assault on worshippers at Al Aqsa Mosque that has wounded hundreds.”

“Israel has now started bombarding the population of besieged Gaza, many refugees from Israel’s ethnic cleansing of Palestinians in 1948. So far, dozens of Palestinian civilians have been killed, including children.”

“The plans to forcibly dispossess the families is part and parcel of Israel’s attempt to alter the demographic balance of the city, by ethnically cleansing Palestinians, while simultaneously providing financial and political support for illegal Jewish-only settlements built on stolen Palestinian land.”

Addressing the crowd, Abbott praised and encouraged supporters of the march, saying:

“We must remember we are part of an international movement … This is a worldwide movement for justice … Palestinian people are having their land seized … and they are now being killed in their homes. All of this is illegal. [7]

“Today we are saying enough, enough with the complicity. Thank you for standing with us.” [7]

In addition to the massive London protest, chants of “Free Palestine” have reportedly been ringing out across swathes of the United Kingdom, with demonstrators marching in no less than 34 separate cities, including Bristol, Cardiff, Southampton, Northampton, Newcastle, Liverpool, Inverness, Edinburgh, Cambridge, Birmingham, and Leeds. [8]

International support and a heightened sense of collective awareness has led to the oppressive and aggressive Zionist state of ‘Israel’ becoming cornered on the world stage, with the vast majority of global opinion arguably being in favour of Palestine. The Republic of Turkey yesterday further electrified diplomatic efforts by revealing that President Recep Tayyip Erdoğan has already personally telephoned leaders of close to 20 nations, including Russia’s Vladimir Putin, Pakistan’s Imran Khan, and Jordan’s King Abdullah II, with a view to discussing the creation of a long-term international peacekeeping force to be deployed in Jerusalem and the surrounding region. [9]

In a reflection of the callous and indiscriminate nature of its leadership, the Israeli regime continues to launch repeated airstrikes on innocent Palestinians for the sixth day in a row, with the death toll currently hovering at 140, including a harrowing figure of 39 children. [10] An early Saturday attack on the Al-Shati refugee camp located in the northern Gaza Strip horrifyingly killed at least eight children and two adults. [1]

Moreover, the regional news offices of Al Jazeera and the Associated Press (AP) have been decimated, with the 11-storey part-residential part-commercial Al-Jalaa Tower targeted and levelled in an airstrike earlier on Saturday. [11]

The moment the building housing AlJazeera and the Associated Press offices in Gaza City was struck by an Israeli missile. Journalists were give an hour warning to evacuate. pic.twitter.com/11MMpvncCA

With the scale of the London protest and others around major cities in the UK and abroad, the UK Government is one of a number of world powers being called to urgently intervene in order to save lives and prevent further needless casualties. A spokesperson for the London demonstration said, “It is vital that the UK government takes immediate action. It must stop allowing Israel’s brutal violence against and oppression of the Palestinian people to go unpunished.” [7]

The spokesperson also added that the UK Government is to be held responsible in part for its inaction concerning the evolving and rapidly deteriorating crisis:

“The bombardment of Gaza which is killing civilians including children is a war crime. It is occurring in the context of the illegal forced displacement of families in Jerusalem and attacks on Palestinian citizens of Israel by far-right groups including illegal settlers from the West Bank.”

“The UK government is complicit in these acts as long as it continues to offer Israel military, diplomatic and financial support. Such support must end with a minimum start being an end to the two-way arms trade and trade with illegal Israeli settlements.” [7]