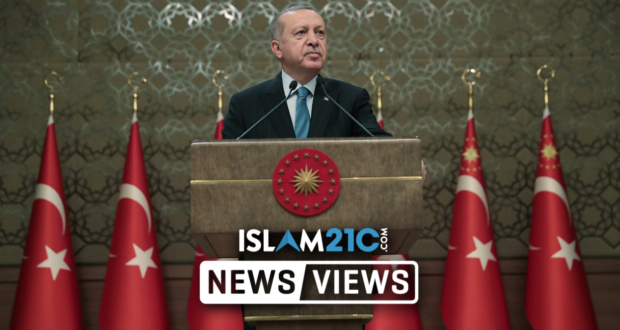 Turkish President Recep Tayyip Erdogan has said that Turkey may consider launching a military operation against Syria if fighting in Idlib is not ceased. [1]

The regime’s vicious campaign has resulted in dozens of towns being destroyed and left in ruins, including hospitals and schools which have been knocked down, according to UN aid agencies.

Erdogan has said that: “Turkey with complete sincerity wants Syria’s stability and security, and to this end, we will not shy away from doing whatever is necessary, including using military force.” [2]

“Developments in Syria are as important as developments within Turkey’s own borders. We will not remain silent on the situation in Syria and Idlib,”

The last rebel-held stronghold in northwest Syria has been the target of a vicious assault by the criminal Assad regime. Backed by Russian air power, the Syrian regime began its assault on Tuesday. It has since made significant and rapid advancements toward the Idlib province, ransacking towns and villages on its way.

The latest attempt to reach a ceasefire on 12 January was ignored by Syrian forces. Since Tuesday, over 200 airstrikes have been launched on the rebel-held territory in northwest Syria. The strikes have forced 700,000 previously-displaced civilians to once again attempt to escape the onslaught of the Assad regime.

The recent campaign has also sparked increased tensions between Ankara and Moscow, with Erdogan accusing Russia of violating the agreement. Turkey has long been backing the rebel forces in Syria and Russia throwing its weight behind the Assad regime.

The Turkish President offered a forceful rebuke of Russian and Syrian actions. Speaking in Ankara on Friday, Erdogan declared that “we will not refrain from doing what is necessary, including using military force”. He noted that he “will not allow the regime’s cruelty towards its own people, with attacks and causing bloodshed.”

He further added that Turkey “will have no choice but to resort to the same path again if the situation in Idlib is not returned to normal quickly.” Turkey has previously intervened three times to date in cross-border military operations.

Turkey has 12 military posts around Idlib, although the recent violence has seen the regime’s forces surround several of posts, limiting Turkey’s access to them. Erdogan has also accused the Kremlin of violating peace agreements between Turkey, Russia, and Iran. Moscow denied these charges on Friday.

In response to the regime’s assault on Idlib, Turkish-backed rebel forces opened a new front against the regime, targeting regime held positions in Aleppo. The SOHR has reported that the charge, focused mainly on the city of Al-Bab, was carried out by factions loyal to Ankara.[3]

Erdogan’s concern stems from its inability to accommodate a further influx of refugees from Syria. Turkey already hosts over 3.5million Syrian refugees and fears that another wave will damage its internal stability.

Erdogan declared that he: “will not allow the regime to put our country under the constant threat of migrants by tormenting, attacking, and spilling the blood of its own people.”

Still, James Jeffrey has noted that movement of the 700,000 displaced civilians towards the Turkish border, to the west of Idlib, will bring with it a fresh international crisis. Thousands of families are now stationed close to the Turkish border without adequate food, shelter, or medicine in the cold winter months.

The latest casualties and bombardment have resulted in another deadly humanitarian challenge as Syria’s war enters another cold winter season. Syria’s nearly nine-year war was born out of peace protests by Syrian civilians for reforms and changes in the Syrian regime. The latter’s response was one of violence and brutality, which forced the people to take up arms in defence.