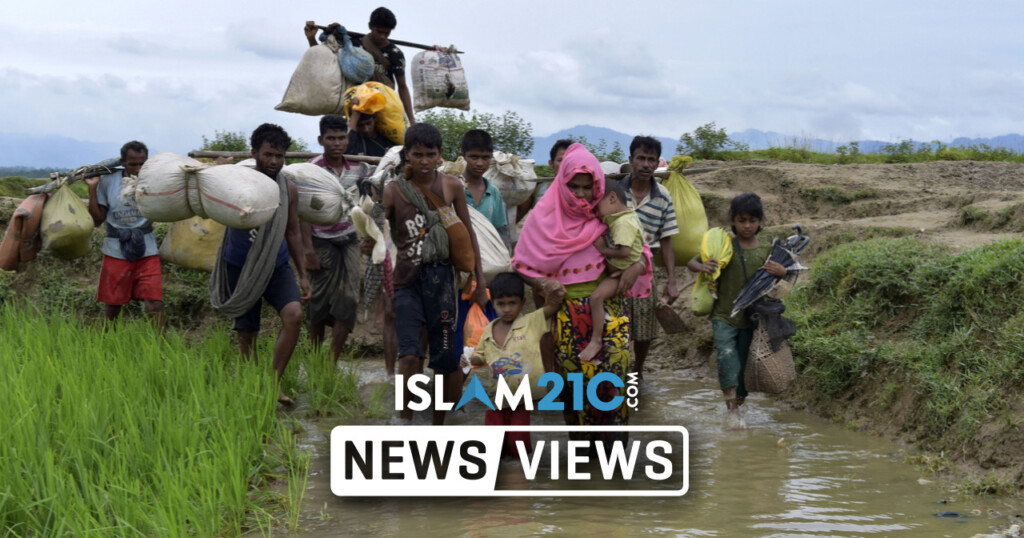 Mohibullah, one of the foremost Rohingya campaigners and activists, has sadly been assassinated. The tragedy occurred while the leader was speaking with fellow community leaders at his modest bamboo-and-tarpaulin office in the Kutupalong refugee camp, located in Cox’s Bazar. Since 2019, he had represented the roughly one-million strong Rohingya refugee community at the UN Human Rights Council (UNHRC). [1] [2]

As is common in Rohingya naming customs, the name Mohibullah originates from the Arabic muḥib Allah, which roughly translates to “one who loves Allah”, or the “one who is affectionate towards Allah”.

Mohibullah (raḥimahu Allāh), a 46-year-old former teacher who was renowned for his vital work which documented the atrocities committed by the Myanmar military against fellow Rohingya Muslims, was shot dead on Wednesday. The assassination was carried out by four or five as yet unknown assailants who fired upon him at close range. At Mohibullah’s funeral, which took place on Thursday at the Kutupalong camp, thousands gathered in order to offer the ṣalāt al-janāzah (funeral prayer). The slain advocate for Rohingya rights was laid to rest in Lambashia Camp-1, as key international human rights organisations including Amnesty, Human Rights Watch (HRW), and the UNHRC rapidly issued condemnations of the shocking murder. They also demanded that the Bangladeshi government commence investigations in order to identify the perpetrators of this heinous act. [3]

“Mohibullah was a leading representative of the Rohingya community, who spoke out against violence in the camps and in support of the human rights and protection of refugees. His killing sends a chilling effect across the entire community. The onus is now on the Bangladeshi authorities to expedite an investigation into his murder and bring all those suspected of criminal responsibility to justice in fair trials.

“We call on the Bangladeshi authorities and the UN Refugee Agency to work together to ensure the protection of people in the camps, including refugees, civil society activists and humanitarian workers from both the Rohingya and host community, many of whom have shared concerns about their safety.” [4]

There is a suspicion that the so-called Arakan Rohingya Salvation Army (ARSA) – an armed group that exists within the sprawling Cox’s Bazar refugee camps – may have been behind Mohibullah’s execution. Hammadi additionally warned that “immediate action” may need to be taken in order to avoid a further deterioration in the security situation of the Kutupalong and Balukhali camps:

“Violence in the refugee camps in Cox’s Bazaar has been a growing problem. Armed groups operating drug cartels have killed people and held hostages. The authorities must take immediate action to prevent further bloodshed.” [4]

For some years, Mohibullah had been widely supported and respected as a leadership figure by many hundreds of thousands of Rohingya refugees, all of whom had fled to neighbouring Bangladesh from Myanmar. This was particularly the case following the violent military crackdowns in Rakhine state, which commenced in 2017. Since then, horrific accounts of forced labour, countless gang rapes, the burning of hundreds of villages, and mass murders have been evidenced. Despite this plethora of evidence, the Myanmar government has continuously labelled such allegations as being manufactured by opponents of the regime. [5]

We mourn the tragic loss of Mohib Ullah, a fearless leader in the Rohingya people's struggle for peace & justice. SAC-M calls on Bangladeshi authorities to investigate Mohib Ullah’s murder & charge, prosecute & punish the perpetrators according to law. #WhatsHappeningInMyanmar pic.twitter.com/lyLZn6kcK3

As the chairman of the Arakan Rohingya Society for Peace and Human Rights (ARSPH), Mohibullah was instrumental in collecting evidence of genocide committed by the Myanmar army. Growing to become one of the foremost organisations providing a voice to the persecuted Rohingya people, the ARSPH was briefly banned by the Bangladeshi government. This occurred after a 2019 march was held, in which around 200,000 Rohingya commemorated the second anniversary of Myanmar’s Rakhine crackdown. In his role as chair of the ARSPH, Mohibullah was one of a select few representatives who met with then US President Donald Trump at the White House, to discuss matters of religious freedom. He had also attended meetings at the UN’s Human Rights Council. During an address in 2019, he said to the attendees:

“Imagine you have no identity, no ethnicity, no country. Nobody wants you. How would you feel? This is how we feel today as Rohingya…For decades, we faced a systematic genocide in Myanmar. They took our citizenship. They took our land. They destroyed our mosques. No travel, no higher education, no healthcare, no jobs…We are not stateless. Stop calling us that. We have a state. It is Myanmar.” [6]

“Mohibullah was a vital voice for the community of Rohingya who had already suffered unimaginable loss and pain when they arrived as refugees in Bangladesh…He always defended the rights of the Rohingya to safe and dignified returns and to have a say in the decisions concerning their lives and future. His killing is a stark demonstration of the risks faced by those in the camps who speak up for freedom and against violence.” [7]

“Mohibullah’s death undermines not only the struggle of Rohingya refugees for greater rights and protection in the refugee camps, but also their efforts to safely return to their homes in Myanmar. Bangladesh authorities should urgently investigate Mohibullah’s killing along with other attacks on Rohingya activists in the camps.” [7]

Moreover, in a press release the UNHRC expressed its sorrow at the news of Mohibullah’s murder. It stated as follows:

“UNHCR, the UN Refugee Agency, is deeply shocked and saddened by the tragic killing of Rohingya refugee leader Mr. Mohib Ullah in Cox’s Bazar yesterday. We condemn this attack in the strongest possible terms.

“We extend our deepest condolences to Mohib Ullah’s family, and to the wider Rohingya refugee community who are mourning his loss. We urge the Bangladesh authorities to undertake an immediate investigation, and hold those responsible to account.” [8]

The situation in Myanmar is rather volatile, with former de facto leader Aung San Suu Kyi currently imprisoned after being deposed in a military coup, which took place in February of this year. Directed by the commander-in-chief of the Myanmar Armed Forces Min Aung Hlaing, Suu Kyi, currently aged 76, was ousted in a military takeover that appeared to be the result of a disgruntled army being unable to accept the nation’s November 2020 election results. Polls revealed that the ruling party of Myanmar, the National League for Democracy, won a resonant 396 out of 476 parliamentary seats. [9]

At present, notorious anti-Rohingya general Min Aung Hlaing continues to lead the caretaker government. In the past, he has never made the slightest attempt to conceal his hatred towards the Rohingya community. He was once infamously quoted as referring to the Rohingya as being “Bengali”. He even crudely suggested that “the Bengali problem was a long-standing one which has become an unfinished job”. [10]