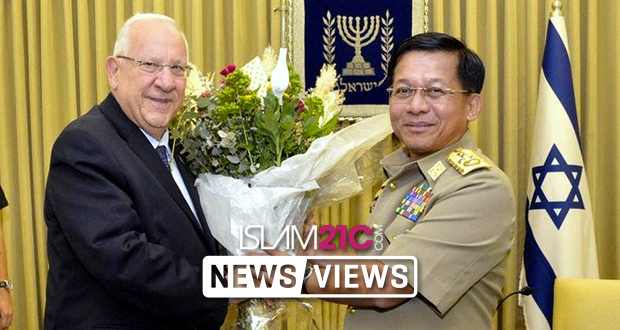 The newspaper Haaretz reported yesterday that “Israel” sold “advanced weapons” to Myanmar, during its ethnic cleansing campaign against the Rohingya Muslims.[1][2]

The newspaper, in its edition on Monday, showed the following Facebook post by Myanmar’s Navy bragging about new warships purchased from “Israel”, with ~3,000 “likes” and ~500 shares:

They reported that these warships are part of a large deal, signed between Myanmar and “Israel” that is said to be worth “tens of millions of dollars”.

This is despite restrictions on the sale of arms to the country. Haaretz reported that it was only last month that Netanyahu refused to stop selling weapons to Myanmar despite the UN declaration concerning its ethnic cleansing.

Last month, Netanyahu’s government refused to halt the sale of arms to the state of Myanmar, despite killings there against the Rohingya Muslims.

Since the reported escalation in ethnic cleansing, systematic rape and killing by the Myanmar military against the Rohingya Muslims in recent years, the country’s military has developed a relationship with “Israeli” top military officials.

The chief of Myanmar’s armed forces, Gen. Min Aung Hlaing “met with Israel’s entire top military brass” two years ago, with Zionist generals visiting Myanmar too, Haaretz reported, indicating cooperation between the two armies, both known for their Islamophobia and racism towards their respective minorities.

An Israeli lawyer, Eitay Mack, has been trying through the courts to expose Israel’s arms deals with other despotic regimes around the world also known for using them on innocent civilians, but has so far been unsuccessful.

Last month the a top court in “Israel” ruled about arms sales to Myanmar in response to a petition Mack filed, along with other human rights activists, but a gag order was placed on the ruling at the state’s request, so nobody has been allowed to report it.[3]

Last month, following public pressure, the UK Government also finally suspended financial aid to the military of Myanmar due to the ethnic cleansing of the Rohingya.[4]