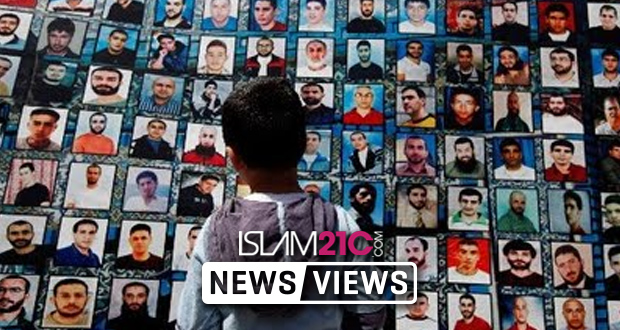 On Wednesday the Zionist Knesset (Parliament) approved the first reading of a bill proposing the execution of Palestinians who carry out operations against ‘Israeli’ targets.[1]

According to local media, the bill was approved in its first reading with the support of 52 votes (out of 120 MPs) and the opposition of 49.

The new bill will need to pass three readings in the Knesset in order to take effect and was put forward by the ultra right-wing Zionist Minister of ‘Defence’, Avigdor Lieberman. He has exerted huge pressure on the parties that form Netanyahu’s government of extremist parties to pass the law through parliament.

Lieberman who once stated “it would be better to drown these (Palestinian) prisoners in the Dead Sea if possible” was reported to have told Knesset he did not understand the opposition of some parties and their lack of belief that the death was a deterrent, whilst acknowledging that the demolition of Palestinian homes of Palestinians who carry out attacks against Israeli a deterrent.

In July 2015, settlers threw incendiary materials at the home of the Palestinian Dawabsha family in the town of Duma in the northern West Bank. The firebombing resulted in the killing of Saʿad Dawabsha, his wife, Riham, and their infant son, ʿAlī. None were spared except six year-old Aḥmed who sustained severe burns.

In response to a question posed by Arab Member of Knesset Ahmed Tibi on whether Netanyahu considered the Zionist murderers of the Dawabsha family, including their baby, as extremists who deserve execution, he replied:

“In principle, I support the death penalty for the murderers of the Dawabsha family.”

It is worthy to note that the homes of the Jewish extremists vindicated for the murder of the entire Dawabsha family were not destroyed.

Ironically, it was Lieberman who told Knesset that the family of Dawabsha did not qualify as terror victims nor for state compensation as they were not residents of ‘Israel’. Analysts expect that the same racist apartheid policies will be followed if the death sentence is ratified by the Zionist Parliament.[2]

The Zionist entity does not yet formally apply the death penalty but sentences to prison terms lasting as long as hundreds of years. The policy of cold-blooded executions has, however, gained pace informally at the encouragement of Rabbis and politicians.

Palestinian men, women and children are routinely shot either under suspicion of their intents to carry out ‘knife attacks’ or when immobilised.[3]