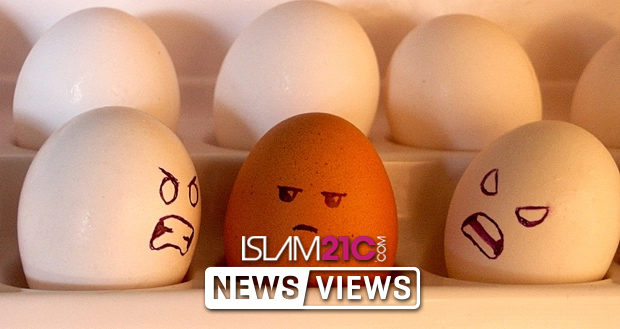 The HJS is well known for writing reports attacking Muslim activists, in particular those campaigning against Islamophobia and for wider public participation of Muslims in the UK.[1] It is funded by far right organisations and individuals from overseas, such as Nina Rosenwald, dubbed “the sugar mama of anti-Muslim hate”,[2] and its Associate Director, Douglas Murray regularly praises far right Islamophobes, including Robert Spencer and Geert Wilders.[3][4]

The HJS’s routine attacks on Muslim organisations are thought to be a result of the likes of Murray’s expressed desire that “Conditions for Muslims in Europe must be made harder across the board.”[5] It has, as a result, little credibility outside of Islamophobic circles, with even Theresa May’s cabinet members “scrambling” to disassociate with them last year,[6] and their last report attacking Muslim speakers provoking widespread ridicule when it was turned into a “Premier League” table of Muslim speakers most hated by Islamophobes.[7]

This latest attack came on the eve of Mend’s launch of Islamophobia Awareness Month in Parliament, which seemingly enraged certain Islamophobic blogs, organisations and journalists, who have tried pressuring the MPs involved to get the event cancelled.

Mend released the following statement today in response to the attacks.

The Henry Jackson Society have published the aforementioned report. Whilst the document is long, it is thin on detail.  It attempts to paint a picture of an extremist organisation due to our stance on opposing aspects of the Governments Counter-Terrorism legislation, opposition to policies pursued by the State of Israel and the promotion of “conspiratorial narratives” about Islamophobia.

Quite simply the report equates political dissent with extremism. This is ironic given that the motto for Henry Jackson Society is “Democracy. Freedom. Human Rights.”

The timing of its publication on the eve of the launch of Islamophobia Awareness Month and our event in Parliament on 1st November 2017 is not coincidental.

Our Parliamentary event shows that we operate in the mainstream of British society and our work has recently been praised by senior figures in all three main UK political parties, including the Labour Party and Liberal Democrat Party leaders.

The Henry Jackson Society report clearly has its own partisan agenda and is aimed at discrediting Mend with a view to trying to discourage politicians, journalists, unions, civil liberty organisations and others to work with us. Our increasing influence and acceptance is an irritant to the Henry Jackson Society and it appears that they believe only certain organisations can be allowed to express political views on behalf of Muslims. It is completely predictable therefore that Inspire and Tell Mama are reported on favourably.

Readers of the report will note that many of its claims are based on innuendo and false assertions. We will be producing a counter-document responding to each and every allegation. We unequivocally reject any allegations of anti-semitism, homophobia, or extremism.

We will also be exposing this report as an example of Professional Islamophobia and demonstrate the partisan motivations behind the author, the Henry Jackson Society, and the neocon movement being mobilised against us.

Previous: Israeli airstrike kills seven members of Gaza’s resistance
Next: 100 Years of Balfour: Between One Promise & Another