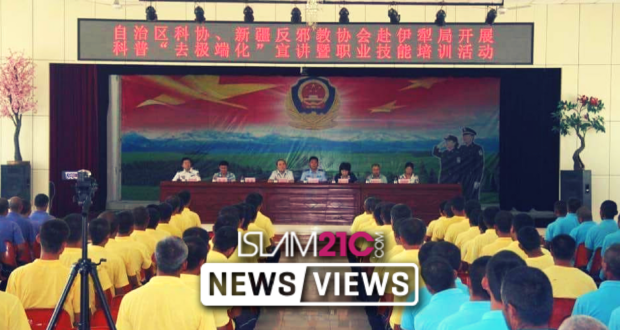 Chinese authorities have detained nearly 1 million Muslims for “re-education.” Detained Uyghur Muslims have been made to eat pork and drink alcohol in the Xinjiang region, an area half the size of India. A US commission called it:

“the largest mass incarceration of a minority population in the world today.”

In a shocking testimony one previous detainee Omar Bekali, stated he was detained without trial or a lawyer and forced to recant on his Islamic beliefs while praising the Communist Party. When Mr Bekali refused, he was forced to stand at a wall for 5 hours at a time, following which he was sent to solitary confinement, where food was withheld from him for 24 hours. Mr Bekali spent more than 7 months in a Chinese prison, despite being Kazakh and reflected:

“I still think about it every night, until the sun rises. I can’t sleep. The thoughts are with me all the time.”[1]

These Chinese internment camps aim to erase the Islamic belief and heritage of the detainees together with rewiring their political ideology. No doubt, these camps, which have rapidly expanded over the past year, spread fear into the larger Muslim population. Markers of extremism included praying at the Mosque other than on Friday, or attending Jumuʿah outside of their village, or having Quranic āyāt on their phones. A former instructor recalled that he saw a group of 20 Uyghur men beaten in the courtyard by guards after they had recently returned from religious education in the middle east.[2]

These modern Chinese political detention centres are redolent of the Mao era. There are some political figures whose name cannot be mentioned without a sense of revulsion and Mao is certainly amongst them. Chairman Mao between 1958 and 1962 murdered 45 million people with his policy named “The Great Leap Forward.”

Historian Frank Dikoter estimates that 2-3 million were tortured to death or summarily killed, often for the slightest of infractions. For instance, when a boy stole a handful of grain in a Hunan village, his father was forced to bury him alive. The father died of grief a few days later.[3]  Mao also targeted and oppressed the Uyghur by forcing them into famine with his agricultural policies and crushing any dissent with brutal force.[4] President Xi Jinping’s policies face accusations of resembling  Mao’s.

Whilst the Chinese Government’s policy to fight ‘extremism’ and ‘terrorism’ in the “People’s War on Terror” term the detentions as “transformation through education”. James Millard, a China historian at Georgetown University says: “Cultural cleansing is Beijing’s attempt to find a final solution to the Xinjiang problem.” In such detention centres, internees recalled the worst parts of the indoctrination programme using repetition, which included criticising and denouncing Islam before their classmates.

Mr Bekali heard one internee apologetically answer: “I was taught the Holy Qur’ān by my father and I learned it because I didn’t know better.” A free man now, Omar Bekali was initially weary of telling his story for fear of reprisal towards his family. However, over the course of March and April of this year, initially his sister, then his mother and finally his father were taken by the Chinese authorities, presumably into the same detention centre. Mr Bekali said: “Things have already come this far” and “I have nothing left to lose.[5]”

Uyghur women have also been detained. One Uyghur woman recalled how she had been detained in the city of Hotan in 2016 and she together with her fellow female detainees were forced to apologise for wearing modest Muslim clothes, praying and teaching Qur’ān to their children.

The indoctrination sessions were followed by 4 hour long interrogations. With one instructor asking:

“Do you obey Chinese law or Sharia?” and “Do you understand why religion is so dangerous?”

Another part of the Chinese Government’s policy is for Government officials to turn up unannounced to a Muslim family’s home and impose a “home stay”. During the forced intrusion, families are compelled to answer questions about their lives and political views.

“Muslim families across Xinjiang are now literally eating and sleeping under the watchful eye of the state in their own homes.”

Last year China banned the Muslims in the Xinjiang region from observing Ramadan, having previously banned Muslim attire and “abnormal” beards. Chinese authorities in the restive province have also ordered Muslims to hand over their prayer mats and copies of the Qur’ān in a shameful attempt to strip them of all their religious identity.[6]

The Qur’ān is replete with examples of superpowers that have been destroyed, both believers and non. The common denominator, therefore, not being kufr but that of oppression. It seems, that Allah (subhānahu wa taʿālā) hates oppression so much He (subhānahu wa taʿālā) will destroy such people, even if they are Muslim. Despotic regimes all over the world, who are seeking to obliterate Islam should be weary of the words of Allah:

“They want to extinguish the light of Allah with their mouths, but Allah will perfect His light, although the disbelievers hate it.”[7]