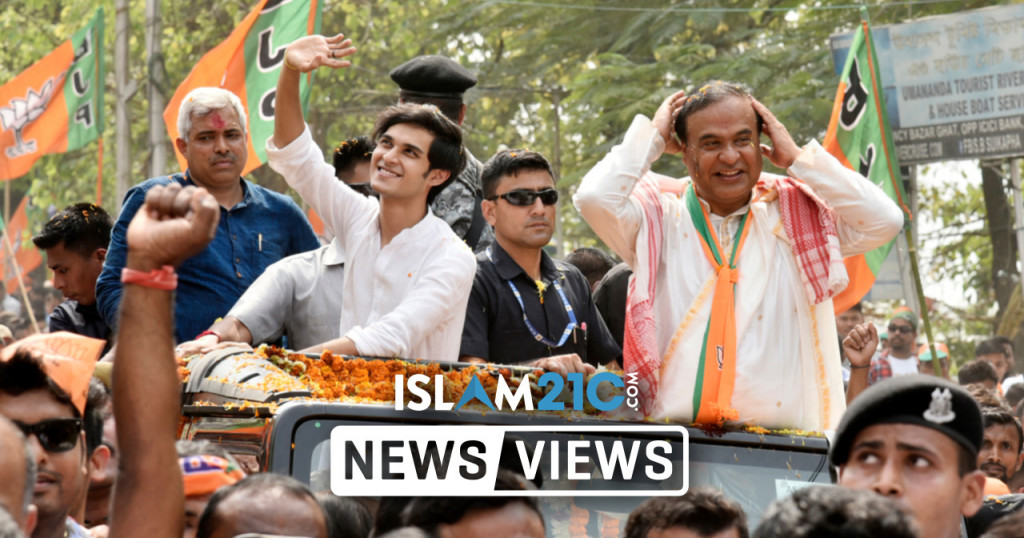 Tensions have flared in the Indian state of Assam after horrific footage spread rapidly, reportedly showing a government photographer viciously stomping on a Muslim protester who had been shot and wounded as police watched on. The photographer in question is Bijoy Bania, a photojournalist hired by the Darrang district administration to “document” the Assam state government’s ongoing eviction drive against supposed “illegal encroachers”. In the video, he is seen ferociously kicking and punching the injured man, who has been identified by police as Moinul Haque. Tragically, Haque is believed to have died following the altercation. [1] [2] [3]

In sickening video footage that has caused an incredible sense of anger across India, Bania rushes to tread on the wounded Haque. This is as a number of armed police officers beat him with batons, despite the victim already laying defenceless on the ground after being shot with live ammunition. Police make half-hearted attempts to stop Bania from attacking Haque; after being gestured to move away from the injured man, he again charges at the wounded Muslim demonstrator, and even delivers a brutal jump kick. Haque is then seen motionless, as a red stain marks the spot where police had shot him in the chest. According to family members, Haque was a 30-year-old father of three who financially supported his elderly parents on a particularly modest income. He grew and sold vegetables for a living, yet the government argued that the land did not belong to him and ultimately proceeded to evict him. [3]

‘Terror Force’ of fascist, communal & bigoted Govt. shooting at its own citizens. Also, who is the person with camera? Someone from our ‘Great Media’ orgs?

The appeal of these villagers, against eviction, is pending in the High Court. Couldn’t the Govt wait till court order? pic.twitter.com/XI5N0FSjJd

Recently, there had been a protest in the Assamese village of Sipajhar, held by ethnically Bengali Muslims who were demonstrating against the state’s “eviction drive”. In his state of desperation, Moinul Haque was also unquestionably one of the demonstrators. In fact, he can be seen in footage running towards armed riot police with a stick. He was quickly shot and encircled before being beaten with batons and suffering even more from Bania’s horrendous actions. Unsurprisingly, Darrang’s Superintendent of Police Susanta Biswa Sarma, who is coincidentally believed to be the brother of Assam Chief Minister Himanta Biswa Sarma, sought to shield his officers. He told the Indian Express newspaper that his men “did what they had to do” in “self-defence”. [1] In response, protesters in Delhi and Assam accused the government of engaging in state-sponsored terrorism against Muslim citizens. [4]

Since 2016, Assam state has been governed by the Bharatiya Janata Party (BJP). Last Monday, both Chief Minister Sarma and the BJP were instrumental in the forced evictions of 800 Muslim families from their properties. Sadly, the same families had already been battling another ordeal at the same time: the monsoon rains. Sarma and his party repeatedly accuse such families of being “illegal encroachers” from neighbouring Bangladesh, when in reality these citizens legally own the land they live on.

In addition, at the national level, India’s Prime Minister Narendra Modi is a BJP ultranationalist who openly expresses disdain for Muslims and Sikhs whilst actively pushing for Hindu advancement in society. Modi and the BJP continue to wreak havoc upon Muslims, Sikhs, and other minorities by enforcing the so-called “Gujarat model” of high economic growth founded upon private-sector manufacturing. Modi has also overseen a push in Hindu support for the BJP, by needlessly creating an enemy out of Muslims and employing the use of violence in order to increase BJP support in areas where they are most electorally prone to competition.

Furthermore, Modi has implemented a number of unabashed anti-Muslim laws in recent years, with the notorious Citizenship Amendment Act (CAA) being at the top of the list. The law, which completely goes against the non-discriminatory spirit of India’s constitution, allows immigrants of a Hindu, Buddhist, Christian, Sikh, Jain, or Parsi religious background to legally apply for Indian citizenship. Any immigrants from the countries of Bangladesh, Pakistan, and Afghanistan who entered India before 2015 are eligible to apply for citizenship. However, notably absent in the religious criteria are Muslims from the previously mentioned nations. [5]

With Moinul Haque’s death, and with Assam state opposition leader Rahul Gandhi referring to the police use of guns against protesters as “state-sponsored fire”, tensions continue to be at a knife edge. Moinul Haque’s mother and wife have been left heartbroken and robbed of their sole breadwinner. Even more sadly, Haque’s three children have lost their father. Assam, which is home to around 10 million Muslims and approximately 19 million Hindus, is at a considerable risk of witnessing a dangerous escalation in hostilities. One group, however, naturally stands to benefit from these tensions and any resultant conflict: the BJP. [6]