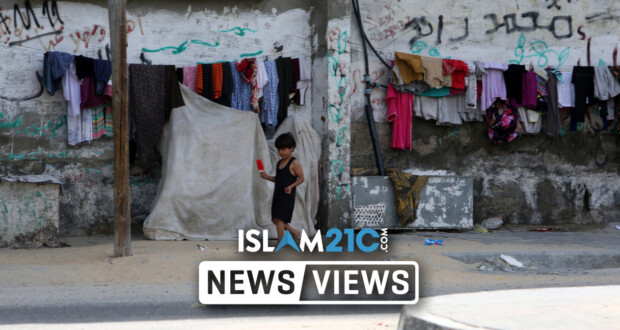 The people of Gaza are now forced to sift through rubbish for food, says the head of the UN Agency for Palestinian Refugees, as displaced Palestinians face extraordinary levels of poverty.

The chief of the United Nations Relief and Work Agency (UNRWA), Phillippe Lazzarini, said that Palestinian refugees across Lebanon, Syria, Jordan, Gaza, and around the world are facing unprecedented levels of suffering amidst the siege on Gaza, cuts in foreign aid, and the COVID-19 pandemic.

“There is despair and hopelessness,” Lazzarini said in an interview, referring to reports from UNRWA staff on the ground. “In Gaza, people are going through the garbage… More people are fighting to provide one or two meals a day to their families.”[1]

Lazzarini, who was appointed the Commissioner General of UNRWA in April, leads the agency at a time of crisis. The organisation faces the threat of financial ruin following the breakdown of its relationship with the United States, formally its largest donor.

Speaking about the funding cuts, Lazzarini said: “It’s a threat, it’s a real threat…We have to take this threat into consideration.”

“We are constantly in crisis mode when it comes to the cash flow,” Lazzarini added.

The US pulled its funding from UNRWA in line with the former’s historic pro-Israel stance. In 2018, Donald Trump cut up to $300m of annual donations, months after he angrily tweeted that the US gained “no appreciation or respect” from Palestinians for the aid sent.[2]  The funding cut came following Trump’s recognition of Jerusalem as the capital of Israel in a historically undiplomatic blunder.[3]

In a statement at the time, a spokeswoman said that the US government would “no longer commit further funding to this irredeemably flawed operation,” adding that the US officially remained “deeply concerned regarding the impact upon innocent Palestinians, especially school children.”[4]

In its final contribution in 2018, the US government donated $60 million. Meanwhile, Israel has enjoyed over $142 billion in ‘aid’ from the US government as of August 2019, according to the Congressional Research Service.[5] To date, Israel remains the largest recipient of cumulative foreign assistance from the US since the Second World War.[6]

Poverty is no stranger to the Gaza strip,[7] which has been facing dire hardship for some time due to the double disasters of the Israeli siege and the COVID-19 outbreak. Medical professionals are working with extreme limitations, and the general populous is struggling to find the most basic necessities.[8]

The UN had previously warned that Gaza would no longer be a “liveable place” by 2020, a prediction that has apparently come to fruition.[9]

The Gaza strip has been under a crippling siege imposed by Israel and Egypt since 2007. For almost 14 years, Gaza’s population of 1.8 million people have been forced to smuggle in past the Egyptian border basic necessities like wheat, grain, and milk for children.

2020-10-13
Ahmad Jomaa
Previous: Black man led on rope by police on horseback sues for $1m
Next: It’s time to address the anti-Blackness in our Mosques