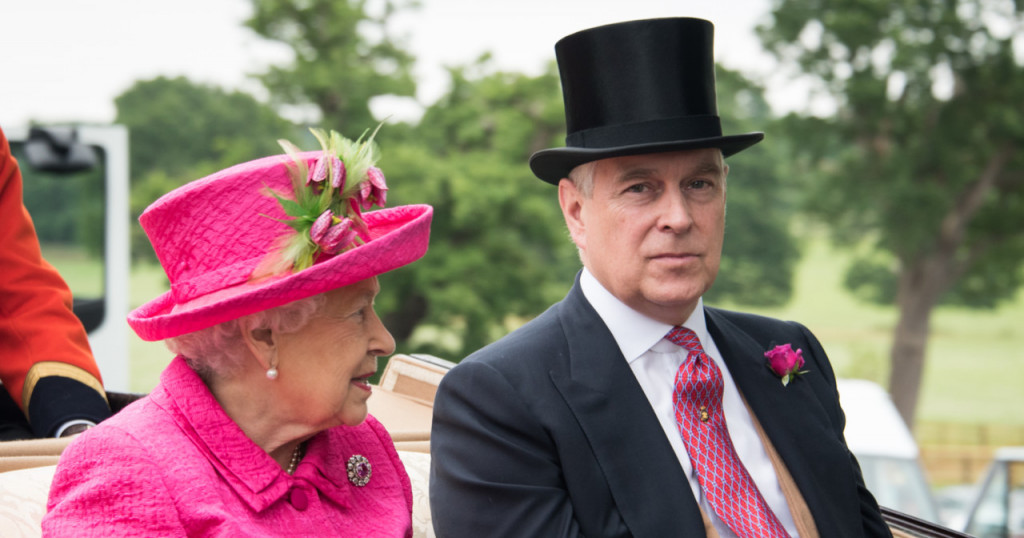 The Queen has taken unprecedented steps to protect the integrity of the British royal family by stripping her second son Prince Andrew of all of his honorary military titles. The Duke of York is currently battling a prominent civil sexual abuse lawsuit in the US. Andrew, 61, has in effect been disowned by his own mother in a dramatic move that closely followed the preliminary decision of Manhattan federal judge Lewis Kaplan, who rejected attempts by Andrew’s legal team to dismiss the case. The duke’s involvement is linked to the disgraced late American financier Jeffrey Epstein, the British socialite Ghislaine Maxwell, as well as accuser Virginia Giuffre. In further damaging news, it has been reported that Andrew will cease to be styled as His Royal Highness – a profound development that prevents him from utilising a key birthright as the sovereign’s son. [1] [2] [3]

The palace said in a terse statement:

“With the Queen’s approval and agreement, the Duke of York’s military affiliations and royal patronages have been returned to the Queen. The Duke of York will continue not to undertake any public duties and is defending this case as a private citizen.” [1]

Brutal. The Windsors have shown that when the institution is under threat, dynastic preservation trumps flesh and blood. pic.twitter.com/wiHmSO1cEz

The Duke of York has at best been a blundering disaster when attempting to defend himself from claims of historical sexual abuse from accuser Virginia Giuffre. During an ill-fated November 2019 interview with BBC Newsnight presenter Emily Maitlis, Andrew denied engaging in sexual intercourse with Giuffre in 2001, when the latter was aged 17. For his alibi, the duke suggested that he was in a Pizza Express in Woking during the time that Giuffre claimed he had sex with her. Andrew further suggested that as a man, it would be difficult to forget the “positive act” of having had intimate relations with someone. [4]

“I was with the children and I’d taken Beatrice to a Pizza Express in Woking for a party at I suppose four or five in the afternoon. And then because the duchess [Sarah Ferguson] was away, we have a simple rule in the family that when one is away the other is there.” [4]

US District Judge Lewis Kaplan, who serves in the District Court for the Southern District of New York, unsealed a 46-page ruling on January 5, where he made it clear that his decision is not one that finds guilt or favours either party. Kaplan noted it was too early to judge whether the 2009 civil settlement between Giuffre and Jeffrey Epstein “clearly and unambiguously” protected the Duke of York from further proceedings. The 2009 settlement is a key aspect of the prince’s defence, with his attorneys arguing that the language used shields him from legal proceedings. At the same time, Kaplan said that the invoked phrases in Giuffre’s 2009 settlement – such as to “forever discharge” those who “could have been included as a potential defendant” – were far too ambiguous. [3] [5]

“We do not know what, if anything, went through the parties’ minds…[Giuffre and Andrew] have articulated at least two reasonable interpretations of the critical language. The agreement therefore is ambiguous.” [3]

The ruling paid no attention to the merits of Giuffre’s case, or to Andrew’s counter arguments, as “the law prohibits the court from considering, at this stage of the proceedings, the defendant’s efforts to cast doubt on the truth of Ms Giuffre’s allegations, even though his efforts would be permissible at trial”. [3]

“In a similar vein and for similar reasons, it is not open to the court now to decide, as a matter of fact, just what the parties to the release in the 2009 settlement agreement signed by Ms Giuffre and Jeffrey Epstein actually meant.

“The court’s job at this juncture is simply to determine whether there are two or more reasonable interpretations of that document. If there are, the determination of the ‘right’ or controlling interpretation must await further proceedings.

“With limited exceptions, the motion must be decided solely on the basis of the allegations of the complaint without regard to any extraneous claims or materials.” [3]

Giuffre has for a number of years accused Andrew’s close associates – such as the British socialite Ghislaine Maxwell and the American financier Jeffrey Epstein – of coercing her into sex with the duke, when she was aged 17. Now 38, Giuffre has been granted the upper hand in bringing the prince himself to trial.

Ghislaine Maxwell – the 61-year-old daughter of the late media tycoon Robert Maxwell – was recently convicted of trafficking girls for Epstein to abuse during the years 1994 and 2004. US district judge Alison Nathan has announced that Maxwell will be sentenced on June 28, despite ongoing claims from Maxwell’s defence team that a new trial should be ordered. The push for a retrial comes after a juror “told reporters that he disclosed to the other members of the jury during deliberations that he was a victim of sexual abuse and further described his memory of those events”. [6] [7]

As for Jeffrey Epstein, it is believed that he committed suicide by hanging whilst being detained at the Metropolitan Correctional Center, New York. However, some have questioned whether other more sinister explanations can be offered for his death. This is in large part due to the post-mortem discovery of a number of unusually broken neck bones on Epstein’s body. Experts have previously claimed that the inclusion of broken neck bones – particularly the hyoid bone – is more common in victims of homicide by strangulation, as opposed to suicide by hanging. [8]