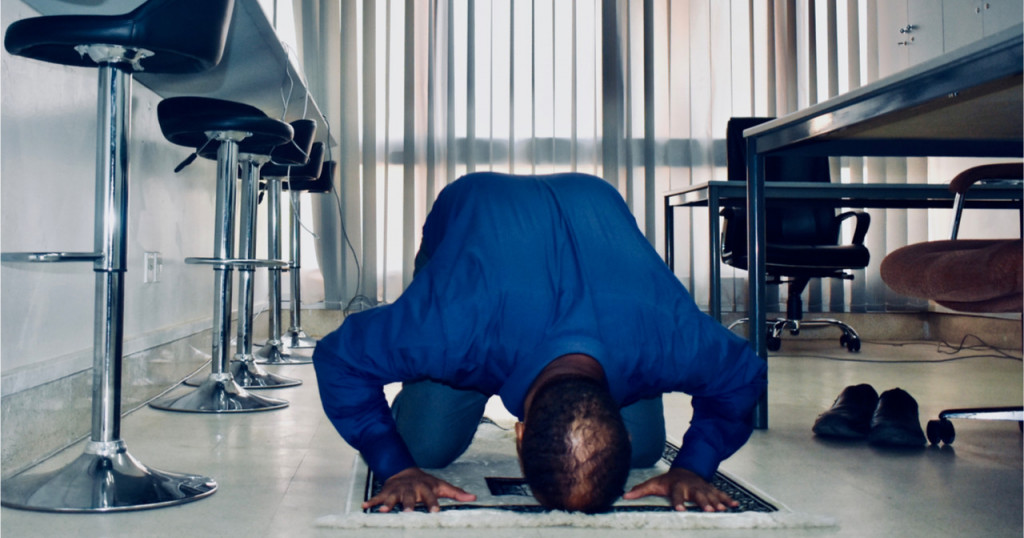 A creative initiative has been launched this week that – by accessing “an untapped pool of Muslim talent” – aims to increase the number of Muslim employees in public and private organisations, in addition to providing various resources that pertain to tackling the scourge of Islamophobia through social media, community work, and word of mouth. Moreover, the organisation seeks to target racism in the workplace by bringing into play the Prince of Wales’ established Race at Work campaign. [1] [2]

The new organisation called Muslim Friendly Employers or MFE seeks to become a consultative platform where prayer facilities, as well as associated ablution rooms and halal food items can be explored in conjunction with large employers, both in the private sector as well as the public sector. Praising the existing work undertaken at institutions and workplaces including Transport for London (TfL), KPMG, – one of the Big Four global accounting firms – and the ACCA (Association of Chartered Certified Accountants), the newly founded organisation states on its website,

“MFE seeks to work with employers to create ‘Muslim friendly’ workplaces which allow employers to attract the best talent from the Muslim Community.” [1]

Delving further into the reasons behind its formation, MFE has produced a brochure, which expounds on various key points. In stating that the initiative “coincides with, and forms a key part of the ongoing well-received ‘Diversity and Equality’ (D&I) drives in many large professional corporations,” the brochure notes areas of Muslim employee needs and challenges such as the month of Ramadan, the major issue of religious discrimination in the workplace, a general lack of ablution and prayer facilities, and the limited provision of halal food in staff canteens and restaurants. [3]

MFE also suggests that in tackling the abovementioned points, “when employees feel comfortable in their own identity in the workplace, they are likely to be more productive at work and more loyal to the employer over many years of service.” As a result, the initiative desires to become a means of producing working environments in which employees feel content with their surroundings and that their spiritual needs are considered in line with inclusion and diversity drives. [3]

In dealing with the prominent dilemma of social mobility and lack thereof in Muslim communities, the MFE brochure takes an optimistic view on the future of “British Muslim talent”, with research by The Social Mobility Commission and the Muslim not-for-profit MEND (Muslim Engagement & Development) taken into consideration. MFE state regarding the stark present situation:

“The future certainly looks bright for British Muslim talent, but the present still poses challenges. Around 50% of British Muslims living in the 10 most deprived locations in the UK presents a huge Social Mobility challenge.

However, MFE also note that based on analysis conducted by MEND in 2016, a study found that “59% of the unemployed group were graduates or postgraduates indicating a highly educated potential Muslim workforce.” Moreover, of the 1000-strong sample group questioned, over half (58%) said that if they knew they could practise their religion at work, this would be a motivating factor in applying for jobs. [4]

Alongside providing support with the design, logistics, and introduction of prayer spaces, ablution rooms, and halal food options, MFE also has a strong focus on Islamophobia Awareness Month (IAM) – an annual initiative that has been marked since 2012, when MEND and other British organisations sought to “deconstruct and challenge the stereotypes about Islam and Muslims”.

On a side point, quite remarkably, IAM now has the support of local government officials, Police and Crime Commissioners (PCC), schools, mosques, in addition to the media. Therefore, it is envisaged that MFE in collaboration with the broader IAM campaign may yet make powerful moves to sharply reduce Islamophobia at work. [5]

The launch of the MFE platform is sure to continue the stellar work carried out by the British Muslim sporting non-profit, Nujum Sports. Indeed, Nujum was itself established in August of 2020 and has already made considerable inroads in the British sporting sphere.

In late October of 2021, for example, the Football Association of Wales signed the groundbreaking Muslim Charter that Nujum hopes will be a means to sporting facilities and clubs across not only Wales but also, ultimately, the entire UK providing Muslims with prayer facilities and an enhanced level of understanding, consideration, and respect among non-Muslim colleagues regarding the Islamic faith. [6]

While MFE is just getting established, it endeavours to produce the first ever “Top 100 Muslim Friendly Employer Index” in the next few years. We hope that it is a success, and that it becomes an influential player in the Muslim employment sector.