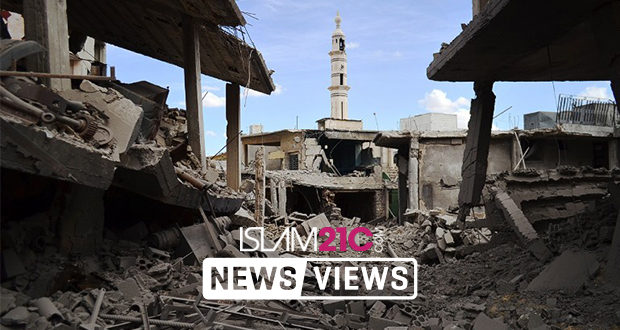 Russian fighter jets have targeted a group of refugees, displaced from Syria’s Akirbat District in the eastern suburb of Hama killing seven civilians and injuring a further 20.

According to the Akirbat Information Office which is affiliated to the town’s Local Council, Russian aircraft targeted a gathering of displaced civilians in the village of Abu al-Fashafeesh; killing – in the initial count – more than seven, including women, and wounding 20 others.

The Office added that this number likely to rise due to many of those injured by the strike having sustained life-threatening injuries, currently receiving basic treatment in an area that lacks hospitals and adequate medical facilities.

Akirbat has been the subject of an intensive and indiscriminate Russian aerial bombardment in what attempts to assist the incursion of Syrian Regime forces into the villages and towns under the control of “Daesh”.

The Local Council of Akirbat has appealed to international and local Human Rights organisations, demanding that humanitarian corridors are opened for the hundreds of besieged families in the area.

International sources have previously reported that the Syrian regime has been colluding with terrorist organisations such as “Daesh”, PKK and many Shi’a factions.

This has led many activists to hold that these indiscriminate bombings are intentionally targeting civilians in order to alter the demographic balance in Syria.

Previous: An Offer You Cannot Refuse
Next: “You have two qualities beloved to Allāh….”