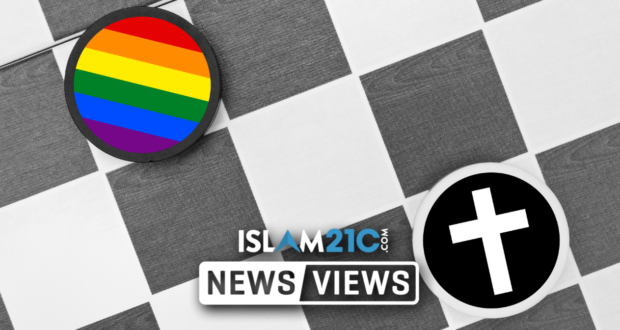 A pastoral assistant at a Christian secondary school, Kristie Higgs, has been dismissed for “illegal discrimination” and “serious inappropriate use of social media”[1] after she shared two Facebook posts on her private account, which was under her maiden name, and, therefore, seemingly had no link to the school where she worked.[2] Mrs Higgs had worked at the school for six years.

Raising her concerns over what was being taught in her son’s primary school, which had recently announced it was to introduce the infamous “No Outsiders” programme to its curriculum, the first post shared details of a petition against the mandatory teaching of Relationships and Sex Education in primary schools.[3] She urged her friends to read the message, whilst warning them of the ongoing indoctrination of LGBT+ teachings in primary schools: 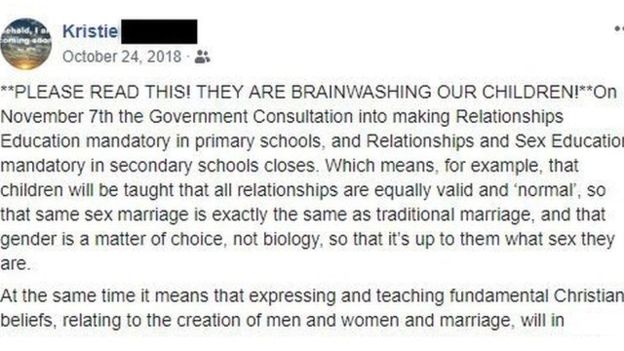 Her message appeared to point out the dangers of such teachings to a young audience, saying that these teachings went against her religious beliefs. Now, more than 115,000 people have signed the petition.[4]

The “No Outsiders” programme has gained notoriety in Birmingham and Manchester after more than 400 parents protested in unison against the apparent attempts to proselytise their children.[5]

The second post shared an article warning about the rise of transgender ideology in children’s books in American schools and included the comment: “this is happening in our primary schools now”.[6]

The two posts were anonymously reported to her employer, Farmor’s School in Gloucestershire, who acted promptly and dismissed Mrs Higgs for “gross misconduct” following the complaint of “posting homophobic and prejudice views”.[7] In a letter to Mrs Higgs, the school downplayed her religious beliefs as being a factor in their decision, whilst pointing out that her statutory rights are “not absolute”. They added:

“We are concerned that you did not demonstrate an appropriate understanding of the school’s requirement to respect and tolerate the views of others and to role model such behaviour.”[8]

Reacting to her dismissal, Mrs Higgs said she would be launching legal action against the school for unfair dismissal and discrimination, with the support of the Christian Legal Centre. She commented:

“I hold these views because of my Christian beliefs – beliefs and views which are shared by hundreds of thousands of parents across the UK.

My number one concern has always been the effect that learning about sex and gender in school will have on children at such a young age.” [9]

“I am determined to fight this case and to stand for Christians and all parents across the country who are being silenced for sharing and holding these views.”[10]

It is not the first time that religious views regarding LGBT+ have been taken to court. In 2014, a Christian family bakery had been sued over their decision not to bake a cake with the slogan “Support Gay Marriage”. After two appeals, the supreme court ruled last October in the family’s favour, protecting their right to “freedom of speech”.[11]

Kristie’s case, however, comes at a time where several parents have been raising concerns over seeming attempts to proselytise young primary school children with LGBT+ ideology, as well as the side-lining of values and beliefs of parents and those who hold different views due to their religion. However, those concerns are being ignored, as highlighted last week when Education Secretary Damien Hinds wrote to schools, encouraging them to teach children about LGBT+ issues in whichever way they deemed appropriate.[12] He added that parents had no right to veto what was being taught.

Such an approach is feared to provide a lack of clarity in what is “appropriate”, leaving it up to those in charge at each school, who will naturally allow their own personally-held views to influence decisions. Reacting to Damien Hinds, one headteacher affected by the protests in Birmingham pointed out that the government should have a “clear national policy” on how to teach pupils about same-sex relationships, rather than “leaving it up to the schools”.[13]

Muslim parents and teachers will be keeping an eye on the outcome of Mrs Higgs’ case and praying for her success, as many rightly challenge the notion that having a privately-held, moral view on LBGT+ lifestyle choices makes one discriminatory or indeed, “homophobic”.