Are you ready for our first ever NATIONAL CAMPAIGN?
Home / News / Shedding Dry Tears over Srebrenica – 22 Years on 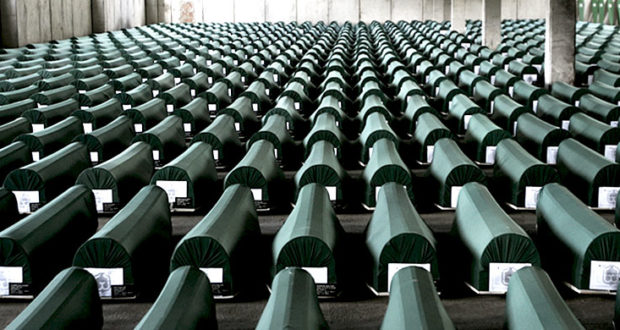 Today marks 22 years since the harrowing massacre of more than 8,000 Muslims between the ages of 7 and 70 at Srebrenica, Bosnia, at the hands of Serbia’s military. On July 11th 1995, three years into the Bosnia civil war, Serb militants, led by General Ratko Mladic, entered the eastern town of Srebrenica after it was declared a UN Safe Zone, ‘protected’ by a lightly armed Dutch peacekeeping force of around 600 troops, commissioned by the UN. ‘Incapable’, ‘unwilling’, or complicit, the UN-sanctioned Serb militants to enter the demilitarised ‘safe-haven’, embarking on premeditated mass murder aided by the international community’s indifference. [1] Ahead of the 22nd anniversary of this enormous late-twentieth-century failing of humanity, the largest atrocity on European soil since World War II, UN Secretary-General António Guterres urged we acknowledge the terrible crime and the inaction of the international community.

“The international community, and in particular the UN, has accepted its share of responsibility…and has worked hard to learn from the lessons of its failures,” said Mr. Guterres. [2]

In a statement by the High Representative of the European Union and the Commissioner Johannes Hahn, the massacre dramatically violated “respect for human dignity, freedom, democracy” and equality [3] as NATO remained complacent and indecisive, despite full knowledge of an imminent massacre. [4] It was only after the international community’s promise of protection for civilians was declared that Bosnian volunteers defending the town surrendered their weapons. This paved the way for the unhindered ethnic cleansing of native Bosniaks as well as up to 50,000 cases of systematic rape and sexual enslavement. [5] Victims are being disinterred from mass graves to this very day. Declassified CIA cables reveal that Britain and the US knew for six weeks that Srebrenica would fall.

But how has the UN, the US or the UK learned the ‘lessons of its failures’ and how can they palpably admit responsibility in light of an ongoing reality? How do the nations of the world manage to shed ‘crocodile tears’ over the Bosnian Muslims, on the back of “historical facts… documented extensively”, [2] when the US continues, in the unmistakable present, to protest its invasion of Iraq and ensued genocide a ‘liberation’, having surrendered it to Mullahs of Qom and Iranian militia-men. What differentiates Serbian militias from the Iraqi anarchic ‘Popular Mobilisation’ force, responsible for exacting the same fate on Iraqi refugees, massacring up to 900 from Fallujah alone, [6] and now doing the same in Mosul alongside US aerial support? In a single airstrike, the US admitted to killing 200 civilians including women and children; independent UK based monitoring groups have put the number closer to 3,000. [7]

In reality, the US and EU’s ‘recognition of its past failures’ is one as forged as its present success. Eastern Europe was ‘close to home’ and, whilst the perpetrator was a rogue terrorist, it had no control of the narrative. Unfortunately, the 24,000 airstrikes on Mosul, Fallujah, Aleppo, and Libya and the concurrent massacres across the Muslim world were all executed by an administration that controls the narrative, funds a fifth of the UN’s $5.5 billion operating budget and decides which massacres are ‘bad enough’ and which political circumstances are ‘right enough’ to shed its dry tears.

Previous: The “Missing Muslims” Report:  More of the Same
Next: Jumu’ah Cancelled at Masjid al-Aqsa