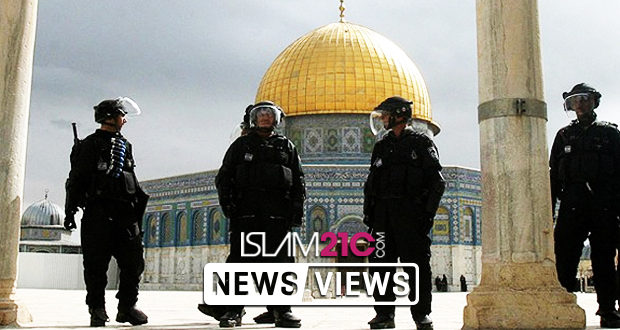 Three Palestinian men have been shot dead by Israeli Occupational Police Forces inside al-Aqsa Sanctuary. During the shooting exchange, two members of the occupational force were killed and another three injured. In a separate incident, another Palestinian was killed in Dheisheh Refugee Camp.

The three Palestinian men were residents of the Arab town of Umm al-Fahm inside 1948 borders and carriers of Israeli nationality. The Inspector General of the occupational Police Force describes what transpired as an ‘unprecedented’ event. The three victims were Mohammed Ahmed Mohammed Jabareen, aged 29, Mohammed Hamed Abd Al-Latif Jabareen, 19, and Mohammed Ahmed Mafdal Jabareen according to the Shin Bet security service[1], none of whom have previous convictions.

The clashes erupted at around 7:15am local time at the vicinity of Baab Al-Asbat (Lions’ Gate), in the eastern part of the Old City leading to Al-Aqsa Masjid, when the three men allegedly fired at stationed occupational forces before entering Al-Aqsa for sanctuary where they were pursued.[2] The firefight continued and the three men fell at the vicinity of the Dome of the Rock Masjid. In the aftermath, occupational forces imposed a curfew around the Old City, cancelling Jumu’ah prayers at Al-Aqsa Masjid and closing all of its gates, a measure last imposed in 1969, before evacuating all worshippers.

Analysts are expecting Israeli officials to exploit this event to support calls for further restrictions of one of Islam’s most important Masājid. Member of Parliament, Moti Yogev, called for the compound to be “closed to Muslim [worshippers] for a long time.”1 Other members of the Knesset have threatened that the “everything-is-mine policy” will cause them [Palestinians] to “pay the price” and they “will be left with nothing”, responding to a question about destroying al-Aqsa Masjid.[3] Although legally acknowledged an Islamic Waqf or religious endowment belonging to Muslims across the world, and inseparable from Islam’s three Masājid, custodians of other endowments across the world have been absent from taking action or voicing their condemnation of the occupation’s “Judaisation” and ethnic cleansing attempts at al-Aqsa.

The scene of today’s incident, ‘East Jerusalem’, is still internationally recognised as ‘Palestinian land’ whilst Israeli soldiers residing in East Jerusalem, imposing restrictions on Al-Aqsa Masjid, are recognised as an ‘Occupying Power’.