The “Missing Muslims” Report:  More of the Same 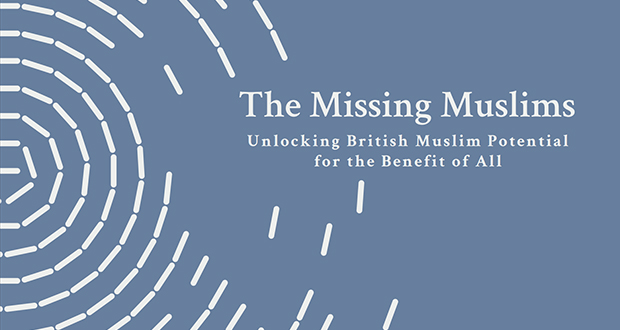 “The Missing Muslims: Unlocking the British Muslim potential for the benefit of all”, a report by the Citizens UK Commission on Islam, Participation & Public Life, is yet another report into “the Muslims”, which follows a familiar theme.[1] “Muslims as a problem.”

The Commission predominantly involved people—Muslim and non-Muslim—sharing a particular establishment thinking, approach and narratives.  It is hardly surprising that there is nothing radical or even new in it. Most of what was concluded has been said in previous reports, and in many areas the discussion on the ground has even moved beyond the confines of this report.  Some of the issues raised go back as far as the Runnymede Trust’s, Islamophobia Commission report in 1997. It echoes similar narratives also found in the Preventing Extremism Task Force Reports after 7/7, which led to Prevent being imposed on the Muslim community—a harmful, damaging enterprise which many Muslim organisations were lured into being involved in.

One wonders then what purpose this Commission report served.  Maybe the answer lies in the conclusion stated at the launch of the Commission, and the headlines after its launch. At the start of its work, Dominic Grieve—chair of the commission—wrote a comment piece in the Guardian headlined “Boosting citizenship amongst Muslims will help tackle extremism”.[2]  That was precisely the approach taken by the Extremism Task Force after 7/7 and indeed some of the recommendations like funding Mosque standards and regulation (MINAB) are ideas that came from that Task Force.

This Commission was from the outset based on establishment notions and narratives about Muslims that in many ways reinforce a stereotypical agenda about “Muslims as a problem community,” that needs to become “integrated” and become more like “the rest of us” (read: white and non-Muslim”), otherwise they are prone to becoming “extremists”.  Now additionally, we also have to be utilised for the “benefit of all”.  The report was a more palatable version of the dreadful Casey report.

The Commission report essentially represents a non-Muslim take on Muslim issues”. This is not surprising looking at Citizens UK’s board members, staff and the composition of the Commission.  One would not describe Citizens UK itself as a bastion of diversity. There is neither a diversity of Muslims on their board or staff, it is after all 2017 and based in London, and by now most major public agencies and civil society organisations should be bustling with diversity.  It is telling that in 2017, over 60 years after many Muslims first arrived on these shores (now into our fourth generation) that neither Governments nor a major voluntary organisation can trust a Muslim (let alone an independent Muslim) to lead a major policy commission or report about their own community.  There have simply been too many “white worldview” reports about Muslims since the Cantle report in 2001.

The Chair and Vice-Chair were both white non-Muslims who are hardly known to possess vast knowledge or experience about Muslims or race issues.  I found the choice of a political and Tory Chair odd and unnecessary.  This appointment was always going to lead to a government narrative on many issues. The choice of advisers and commissioners, with hardly a dissenting or critical Muslim voice amongst them, was bound to produce an unchallenged establishment narrative in the report.

The number of people with past or current links to certain Muslim “community organisations”, or each other, was problematic.  It represented conflicts of interest, and was unhealthy for the Commission, and no doubt impacted its views and recommendation. I would question how such conflicts were managed by Citizens UK given also that a previous member of its board, with links to such organisations, became its main Muslim adviser, and its Project Manager had such links too.  It is not surprising then that some have seen a key agenda of this report as a call for the Government to re-establish links with particular Muslim organisations,[3] rather than the Muslim community.

This is particularly odd since the report itself critiques mosque committees for being run by “community leaders” who are the “usual suspects”. Key Muslim advisors to the Commission are the very embodiment of the term “usual suspect” and old guard “community leaders”. In fact, many Muslims involved by the Commission could be considered “usual types” that government agencies and politicians feel “comfortable” to talking to.

Like the Casey report there is no list in this Commission’s report of those organisations or individuals who provided written evidence or feedback, or of those who attended the Commission hearings.  It would have been useful if written submissions were published in full.  This would have given some indication of how representative the range of opinions and views expressed in the report were.  In the absence of this, the reader is left with a feeling that the Commissioners chose those comments and opinions—unsubstantiated in many cases—that were a fit with their own views and interests rather than those of the broader Muslim community.

The overall approach is one that still treats Muslims as subjects rather than citizens; Muslims, their issues and solutions, must be defined by others, rather than being defined by themselves based on equal worth and standing.  We are only relevant if we fit in with the vision and values of others rather than being accepted for what we bring, and how we define ourselves, our problems, and our aspirations for our own.

The chapter headings and issues within them follow a typical Government script which sees Muslims through the lens of security.  It is very much a top down approach rather than a genuine bottom up one.  Government policy since 9/11 has focussed on issues that see Muslims as a problem, be it segregation, integration, identity, belonging, loyalty, “them and us”, cohesion, problems with Mosques,Imams and Muslim Institutions, Prevent, “non-violent extremism” and political engagement (or “entryism”).  The fact that the report broadly follows the same establishment script is not surprising, given its composition.  Much of this report differs little from existing government policy towards Muslims.

Throughout the report there are subtle, uncritical affirmations of many aspects and concepts of Government policy, such as “common remembrance” of Muslim soldiers killed in World War l, “British Values”, “them and us”, “extremism” and the Prevent agenda.

Whilst the report touches on many issues that are relevant, it is a shame that the way discussions have been framed avoids the much tougher questions, that I hear being raised in the Muslim community on a regular basis, that are the true barriers for Muslims achieving their potential in society:

“What do Muslims in Britain themselves see as their future in an increasingly hostile environment in society? Should we stay or emigrate?”

“Why have Muslims become so marginalised—some would say demonised—since 9/11 and in so many areas of public life and how has Government narrative and policy contributed to that and the discrimination that Muslims experience?”

“Why is Muslim employment being concentrated amongst Muslim employer parts of the economy, how widespread is the experience of discrimination based on faith?”

“How do we reverse decades of hostile government policies towards Muslims?”

“Have Muslim MPs contributed anything meaningful towards policy and legislation aimed at the Muslim community?”

“How has foreign policy contributed to the alienation of the Muslim community and how can Muslims channel their anger effectively?”

“Is IPSO just a paper tiger and do we need an independent press regulator to clamp down on the many outright inaccurate, false and hateful stories about Muslims?“

“How do we protect ourselves from hate crimes?”

“How should Muslims be organised in modern Britain in a manner which makes them an independent and effective presence?”

“How should Muslims engage with the political system and politicians and who is representing our interests?”

The chapters on policing, security, and especially the Prevent section is inadequate and in many ways the Muslim community, with the help of civil society, have moved this debate far beyond the discussion and recommendations in this report. Furthermore, Prevent was not even part of the original remit of the Commission.

The emphasis on employment, discrimination and Islamophobia is welcome.  The report needed to consider, though, the extent to which Government policies like Prevent have contributed to discrimination and disadvantage amongst Muslim communities.

It would have been helpful if the Commission had taken evidence from Muslim and non-Muslim organisations and lawyers, that deal with the impact of Prevent and other Government policies, but all too often those voices are dismissed as “the problem of extremism”.   The report is critical of government and wider society for not engaging with a broader range of Muslims, but the Commission in its failure to engage only acceptable “good” Muslims and not those deemed “bad Muslims” is guilty of the same problem it is highlighting.  Controversial (and potentially demonising) terms like “extremism” and “radicalisation” are used in the report but not defined.

“There is no doubt that extremist groups and organisations exist – including within British Muslim communities – that wish to see Prevent fail for their own ideological reasons.”

The section on political participation, I found to be full of conjecture and stereotypical attitudes to Muslim politics, focussing on “the Biraderi system” (kinship networks) for which there is really only anecdotal evidence. A broader picture would have assessed the role played by political parties in manipulation of local Muslim community politics and the Muslim vote. There is no focus on left and anti-racist politics and the Muslim involvement in it at various levels. The section mentions discrimination against Muslim female political candidates because of the Biraderi system but this does not seem to have halted the progression of Muslim women at the highest level of British politics, with 8 out of 14 of the Muslim MPs now women, and a Muslim Baroness having been the highest serving Muslim at political level.

The section on Leadership and Institutions is critical of many Mosques and Committees and talks about the need to introduce better standards of governance, management and accountability. Few would argue with that.  However, we also have a number of Muslim Umbrella Organisations who pride themselves on being the representative bodies for Mosques. Some have been around for 20 years.  Maybe a better starting point would have been to ask what role these umbrella organisations have played in improving standards amongst their members.  One might even ask; what benefit do they serve for the Muslim community?   These are questions that are frequently raised in the Muslim community.

Citizens UK is an organisation that is about building capacity and empowering civil society and communities.  For me the work of the Commission had the opposite effect. An empowering approach is one where Muslims take control and charge of their own issues and find their own solutions to them. The real question Muslims should be asking is this. Having settled in the UK for over 60 years, how long are we going to allow non-Muslims to decide our agenda, define our issues and problems and prescribe solutions and ways forward for us?  When are we going to become confident enough to launch our own Commission of our own people, on our own issues and write our own report?  When are we going to have enough confidence to say to Government, agencies and the media: we refuse to be defined by you and your narrative, rather we have our own vision of the type of community we want to be and how we relate to each other and the rest of Britain.  We will do things our way not yours.