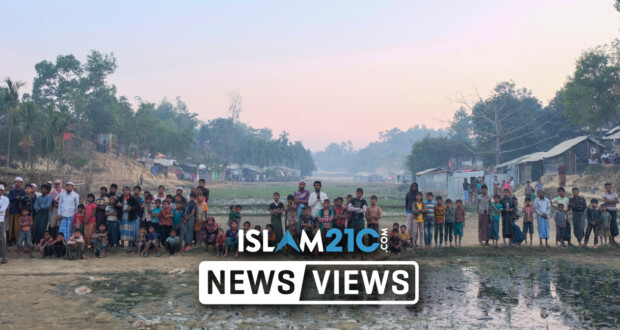 Rohingya men, women, and children stand in anticipation of food supplies, in the Balukhali refugee camp set up in the port city of Cox’s Bazaar, Bangladesh.

Footage has tragically shown a number of malnourished Rohingya men and boys being beaten by Burmese human traffickers onboard a small fishing boat transporting them to Malaysia. [1]

VIDEO: From the crowded camps of Bangladesh, Rohingya refugees take a dangerous and sometimes deadly trip by land and water as they try to reach Malaysia.

An @AFP investigation has pieced together the human trafficking network running the dangerous passage to a new life pic.twitter.com/yrJDzvPkKX

The video, reportedly filmed in April 2020, was recorded by a smuggler who later fled the craft.

The footage paints a gruesome picture of the ongoing plight of the Rohingya people, who have endured a decades-long ordeal that has yet to cease.

An article on Islam21C published in October documented the difficulties faced by those who have left for neighbouring Bangladesh and others who are stuck in refugee camps with no certainty for their future. [2] In an interview with Agence France-Presse (AFP), 16-year-old Mohammad Osman at a refugee camp in Bangladesh said:

“They started beating us because we complained about the food… They randomly beat us just because we were asking for more rice and water.” [3]

Another refugee, 19-year-old Enamul Hasan, told AFP there have been numerous beatings by the Burmese traffickers, but these were not recorded. Hasan stated how the lashings – often using heavy ropes and belts – were so severe that some fellow refugees had died from their injuries.

“They beat us mercilessly – hitting our heads, tearing at our ears, breaking hands.” [3]

Passengers had pleaded with the smugglers to take them to land, but these requests were met with an iron fist. When more passengers began to resist, the smugglers felt threatened, and eventually another boat came and all but two of the smugglers left.

The pair of traffickers who remained on the larger boat said that they would take the passengers to land and so told the men not to fight back or retaliate against them.

A few days later, the refugees were left near Bangladesh and the last two smugglers also fled.

“…But the smugglers told us to shut up and that there was no land for us. They said they’d kill us if we kept talking… We realised if this continues, we all would die. We needed to do something. We felt like we were in hell… So we attacked the crew since we had nothing to lose. It was a life-or-death situation … we threatened to kill the smugglers if they didn’t drop us on land.” [3]

The fact that human traffickers are allowed to operate a ‘business’ by exploiting vulnerable people is truly shameful, but as long as the world does not raise concerns far more vocally and implements sanctions against the Burmese government, it is hard to imagine that this illegal activity will cease to operate.

2020-12-20
Shaheer Choudhury
Previous: “Why Is There Eternal Punishment for Temporal Sin?”
Next: Palestinians without COVID-19 jab as ‘Israel’ begins mass vaccination