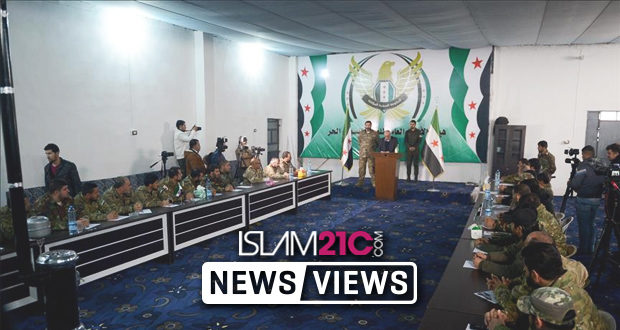 The head of the Syrian Interim Government, Jawad Abu Hatab, announced on Saturday the formation of a military structure under the name of “National Army”. The military structure has unified around 30 groups of the ‘Free Syrian Army’ (FSA).[1]

The Interim Government of the opposition has announced the formation of the Syrian National Army in the northern and eastern parts of Aleppo, and considers the two regions the nucleus of the establishment of the army.[2]

This comes after Abu Hatab met with the military commanders of the Free Syrian Army, in the northern city of Azaz; where the meeting lasted for about four hours.

According to the statement by the government, the army will be led by general staff consisting of dissident officers from the regime forces and comprising of three corps.

“The priority of the national army is to preserve the liberated areas within the framework of the Euphrates Shield, and to defend the Syrian people against the Syrian regime and terrorist organisations.”

“the national army formed through the unification of three corps in the Free Syrian Army, and the strength of 22,000 soldiers.”

In addition, he pointed out that, “the first corps received military training in Turkey,” stressing that “Turkey has supported the Syrian people in all fields within the liberated territory, since the launch of the shield of the Euphrates.”

Turkish forces carried out Operation “Euphrates Shield”, which lasted for just over seven months, in support of the Free Syrian Army.

During the operation, the Free Syrian Army were able to expel Da’esh (ISIS) militants from about 2,000 square kilometers, from the border town of Jarabalas on the Euphrates River to the town of Bab, north of Aleppo, which was a stronghold of the group.

Colonel Haitham Afisi, the Deputy Chief of Staff of the Army stated that the aim of the army will be to defend the fundamentals of the revolution, maintain a unified Syria and to overthrow the regime.

This latest move presents the culmination of Turkey’s involvement that many across the world have gone to great lengths in criticising and seeing as an attempt to crush the revolution or side with its adversaries. The new international relationships and understandings for what many will see will serve the best interests of defending the remaining strongholds of the revolution that collapsed as a result of continuous internal fighting between the different factions.

2017-12-31
Hamad Momin
Previous: Beyond Glass Ceilings
Next: Be Inspired by this Jerusalem Prophecy