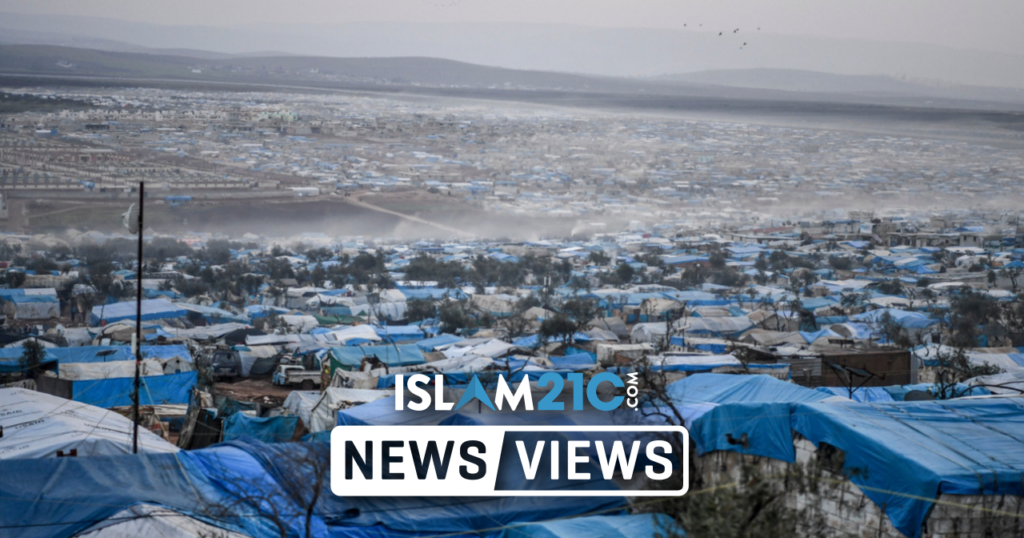 Syrian human rights activists in London have launched a hunger strike in protest against atrocities being committed by Syrian regime forces in the rebel-held province of Idlib.

The human rights group Hunger Strike For Idlib has also staged a two-month demonstration at 10 Downing Street in London and will continue with their hunger strike to raise awareness and to bring the world’s attention to the plight of Syrian civilians in Idlib.

The group said in a statement:

“Nowadays, the daily death of hundreds of Syrians doesn’t even make the news on the world’s media, therefore dozens of us Syrians decided to declare an open hunger strike to draw the world’s attention once again to the massacre that is taking place in Syria as a whole and in Idlib in particular by the Assad regime and its allies.”

The group’s actions also aim to bring awareness to the hundreds of thousands of Syrians who have been illegally detained in the Assad regime’s notorious prisons, tortured and executed without ever facing a fair trial.

“Our strike is also an outcry at the world’s silence towards the hundreds of thousands of people unlawfully detained in the notorious Assad prisons and are being tortured to death without any trials. We call upon the international community to fulfil its duty and stop Assad allies’ continuous crimes against humanity of the Syrian people who only want freedom and dignity.”

Shaza Abuwiddo, one of the organisers of the strike campaign, spoke of the dire conditions in which over one million Syrians live in abject poverty and face the constant threat of indiscriminate bombardment from Assad’s forces and allies. Abuwiddo also spoke of the innocent Syrians unlawfully incarcerated in the Assad regime’s notorious prisons, facing daily torture.

“The main concern is the civilians of Idlib; half of the civilians there are children, with half a million being displaced with many more becoming refugees,” Abuwiddo said, adding that “Idlib is on the edge of a human crises and the people need to make something about it, I think we all need to stand up and do something about.”

“The suffering of the Syrians who are either displaced or languishing under the brutal bombardment, forcibly hidden and tortured to death in the darkness of prisons, constitutes crimes against humanity that are the ugliest and most brutal in modern and contemporary times and they are tantamount to the level of genocide,” the human rights activist said.

According to Abuwiddo, the hunger strike is a global campaign with more than 100 participants taking part in a number of countries. The hunger strike has been going on for a number of months. The campaign has attracted the attention of the global media, with some European journalists joining the strike in solidarity.

“Despite the atrocities and brutality experienced by the Syrians, they still cling to their desire for freedom and dignity, the priority of a political solution to the imposition of international law, the implementation of UN resolutions, and the accountability of perpetrators and criminals for war crimes and crimes against humanity.”

The Syrian regime on Friday agreed to a conditional ceasefire in the rebel-held and besieged province of Idlib. The announcement follows months of intense bombing by regime forces and its allies on the last rebel-held province in the north of the country. Friday’s agreement, however, is on a condition that the Turkish-Russian buffer zone be implemented.

The Turkish-Russian deal, also known as the Sochi agreement, was signed in September 2018 and created a buffer zone of 15 to 20 square kilometres to separate regime forces from the rebels in the Idlib province. The zone is monitored by both Russian and Turkish troops.

Syria’s eight-year civil war was born out of peaceful protests by Syrian civilians for reforms and changes in the Syrian regime. The latter’s response was one of violence and brutality, which forced the people to take up arms in defence. Over a million Syrians are trapped in the Idlib province without adequate food, shelter, and medical security.

Over 500,000 people have been killed in the regime crackdown, with many more being displaced. The Syrian regime, with backing and support from its allies in Russia and Iran, has been able to militarily defeat opposition and rebel fighters, and is regaining territory that has been lost in previous years.