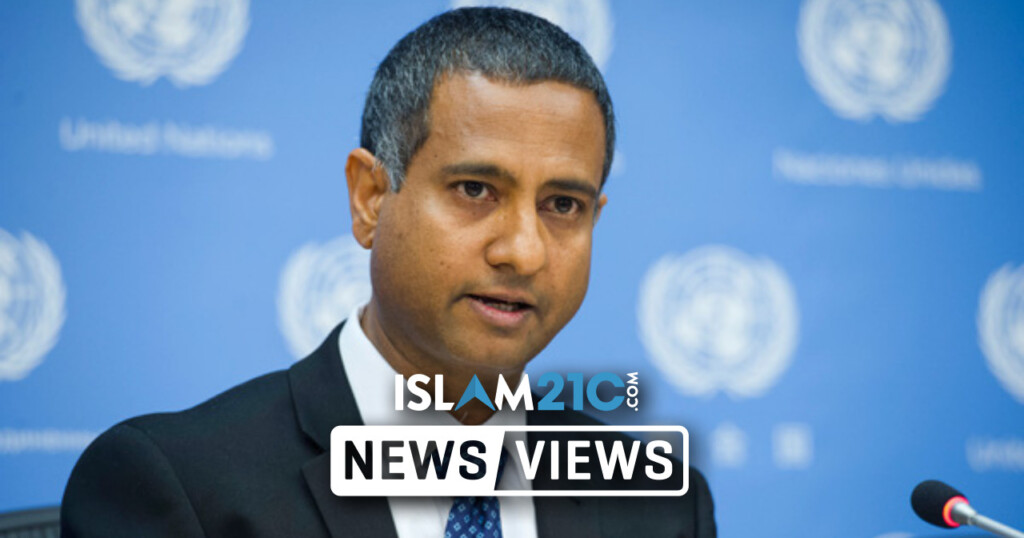 In a report to the United Nations Human Rights Council, the Special Rapporteur on Freedom of Religion or Belief argued that the level of unfavourable views towards Muslims has risen to epidemic proportions. [1]

Ahmed Shaheed on Thursday addressed the Council in Geneva, blaming a number of countries and governmental organisations around the world for the increase in anti-Muslim hatred. While not disclosing any names, Shaheed accused such nations and entities of exacerbating the issue of Islamophobia “by adopting measures which disproportionately target Muslims and define Muslims as both high risk and at risk of radicalization”. [2]

Entitled Countering Islamophobia/Anti-Muslim Hatred to Eliminate Discrimination and Intolerance Based on Religion or Belief, the extensive 10,000-word report covers the following areas: comprehensively understanding the concept of Islamophobia, “including the processes of essentialization and racialization that propel this form of bias”; providing examples of the experiences of affected communities and their relevant impacts on human rights; affirming the relevant international human rights framework; and proposing recommendations to address and reduce the impact of Islamophobia. [2]

In the report, the former Maldivian diplomat and Minister for Foreign Affairs also said that many of the policies implemented in order to combat terrorism have ended up broadly affecting a majority of innocent Muslims. This has been done by prohibiting Muslims from living according to Islamic beliefs, in addition to the “securitization” of religious communities and “limits on access to citizenship, socioeconomic exclusion and pervasive stigmatization of Muslim communities.” [2]

The report goes further to say:

“Islamophobia builds imaginary constructs around Muslims that are used to justify state-sponsored discrimination, hostility and violence against Muslims with stark consequences for the enjoyment of human rights including freedom of religion or belief…”

“In such climates of exclusion, fear and distrust, Muslims report that they often feel stigma, shame and a sense that they are ‘suspect communities’ that are being forced to bear collective responsibility for the actions of a small minority…”

“Harmful stereotypes and tropes about Muslims and Islam are chronically reinforced by mainstream media, powerful politicians, influencers of popular culture and in academic discourse…”

In his concluding remarks, Shaheed noted the challenges faced by many Muslim women, describing such difficulties as a “triple penalty”; an individual that is female, Muslim, and of an ethnic minority background is often the victim of a great deal of discrimination and targeting.

The report also cites rather revealing surveys conducted in Europe in 2018 and 2019, which concluded that 37% of the population held unfavourable views towards Muslims. [3] [4] [5] A 2017 survey is also quoted in the report showing that 30% of Americans view Muslims in an adverse light. [6]