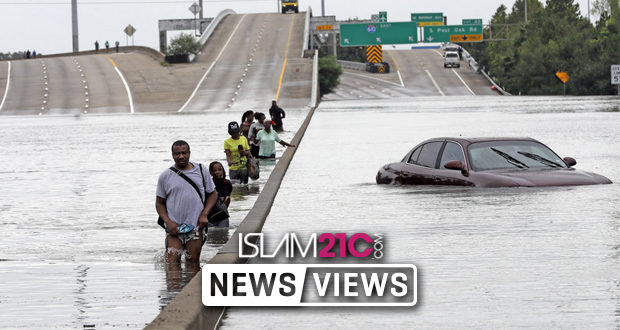 US city refuses hurricane aid for victims who boycott Israel

A Texas city’s residents who were devastated after a combination of Hurricane Harvey and flooding were forced to pledge that they will not boycott Israel in order to receive financial aid from the Dickinson City Council.

The Dickinson Harvey Relief Fund is distributed by the City Council to those who were affected by the flooding. The three-page application form titled ‘Hurricane Harvey Repair Grant Application and Agreement’ states in one of its long agreement clauses that,

The Legal Director of the American Civil Liberties Union (ACLU), Andre Segura lashed out at the clause by drawing parallels to the 60 to 70-year-old McCarthyism which is a practice of making accusations of subversion or treason without proper regard for evidence.

“The First Amendment protects Americans’ right to boycott, and the government cannot condition hurricane relief or any other public benefit on a commitment to refrain from protected political expression.

“Dickinson’s requirement is an egregious violation of the First Amendment, reminiscent of McCarthy-era loyalty oaths requiring Americans to disavow membership in the Communist party and other forms of ‘subversive’ activity’.” [2]

The City’s attorney defended the move, referring to the state law introduced in May which prohibits public bodies from giving contracts to companies that boycott Israel. This Application and Agreement form however is used not only for companies, but also for “owners of homes and businesses”.

Earlier this year, on the 2nd of May, the Texas Governor, Greg Abbott signed the House Bill 89, known as the Anti-BDS (Boycott, Divestments, and Sanctions) bill, which prohibits all state agencies from contracting with, and certain public funds from investing in, companies that boycott Israel. [3]

The ACLU had claimed that previous Supreme Court decisions had established the government could not require individuals to indicate political beliefs to obtain employment, contracts or benefits. [4]

The ACLU has made an application form and has asked those affected by this clause to contact them on this link. [5]

Social media users have reacted to the City Council with various words and phrases, describing the move as; “Crazy”, “Stingy”, “Draconian”, “Israel worship”, among many other comments and statements.

or if? “the Applicant verifies that the Applicant: (1) Is not Muslim; and (2) will not become Muslim during the term of this Agreement.”

Palestinian author and founder of Electronic Intfada also revealed that it is not just this city but also many others have started to carry out similar discrimination.[7]

In the UK this year, a high court judge ruled that the UK government acted unlawfully by trying to block councils from pursuing divestment boycotts and sanctions against Israel through their pensions schemes.[8]

2017-10-22
+Editor
Previous: Burma Muslims: Past, Present and Future
Next: The Fiqh of Socialising