Avoid These Haram Dates This Ramadan 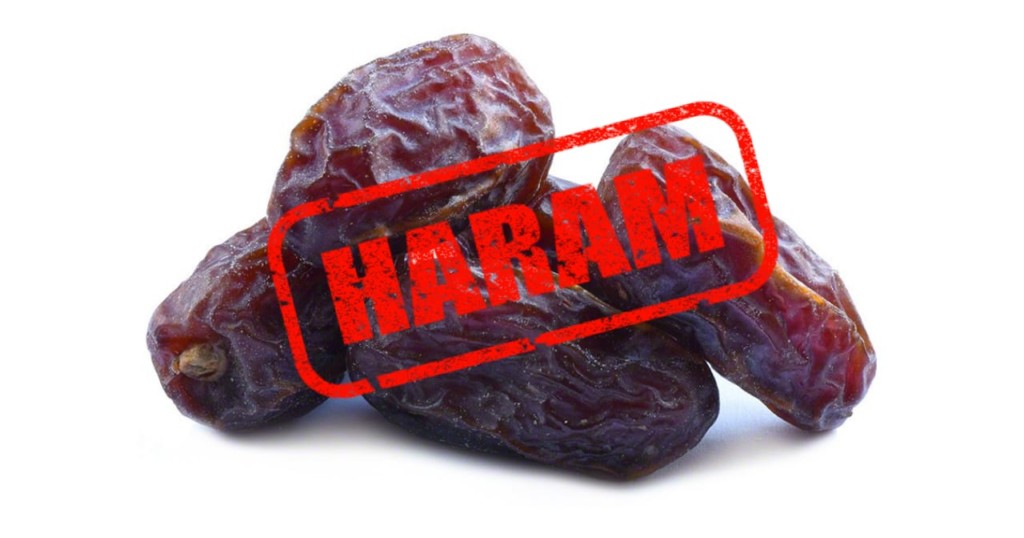 Israelis are among the world’s largest exporters of agricultural produce. According to a report by the WhoProfits Research Center, 40% of the dates they had grown in 2011 were exported with a profit of $265 million. Most date groves are located in the occupied part of the Jordan valley and Dead Sea area, with illegal settlements producing up to 60% of Israeli dates and up to 40% of those are exported. Over half of the world’s Medjool dates are grown in the occupied Jordan Valley.[1]

Ever since the seizure of Palestine in 1948, anti-Zionist movements and many Muslims have embarked on a peaceful campaign of economic boycott, seen as the ‘minimum’ one can do to pressure the Zionist government to halt its crimes and oppression. Many times this comes as a reaction to major transient events, whilst the on-going occupation is rarely considered enough of a reason for the boycott to persist, when weighed against the quality of products Zionist occupiers cultivate from the blessed land.

This is often justified by the premise that it is permissible to make purchases from the People of the Book, even during times of war. This is supported by various ḥadīth. However, the Palestinian cause is unique. Their land and rights have been completely and unrestrainedly stripped. A verdict also exists on the issue though it is unfortunately often overlooked.

The first to present this Fatwa was Sheikh (Dr) Ahmad al-Raissouni in 2010, a Faqih and authority in Islamic Fiqh (born in 1953 CE). The Sheikh is a founding member and the current President of the International Union of Muslim Scholars. He is currently the Director of the Center for Studies and Research inMaqaasid in Rabat and has held this position since late 2012.[2] He also serves as a member of the Executive Council of the World Forum of Muslim Scholars, within the Muslim World League. His Fatwa has the support of numerous scholars who have also reviewed it and champion it from a legal Islamic perspective. I also endorse and support this verdict myself. 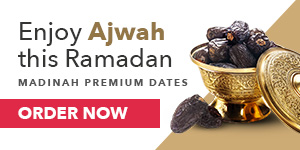 Summary of the Fatwa

The Fatwa declares that it is Harām (impermissible) to buy and sell dates imported from “Israel”, seeing as “these dates have been stolen from their original owners, the Palestinians”, indicating that purchasing these dates is a way of “supporting and funding the continuity of this theft.”[3]

“Israeli dates are much like all Israeli goods, both impermissible to possess, or to pay money for their possession. It is also impressible to trade with such goods. Thus buying (these dates) is Harām, offering it for sale is Harām, actually selling them is Harām and their profit is Harām.”

Two Underlying Reasons for the Verdict

“The first of which is the fact that these dates have been wrongfully taken from their rightful owners (known as Ghasb in Fiqh). The Zionists [illegally, unethically and inhumanely stole] the land of Palestine, including its farms, its trees, water and its homes. Thus everything that is produced from it is stolen wealth, impermissible to be purchased from the one who usurped it.”[4]

“The second reason is that purchasing Israeli goods is a way of supporting and funding the continuity of [Israeli] theft [of Palestinian land], and all of the crimes committed by the Zionists in Palestine and its surroundings. Those who give their wealth to the aggressor and thus empowers this aggressor [and aids them in continuing] in crime becomes a partner in this.”

Are they not ‘the People of the Book’?

Some retailers justify their selling of these dates because it is from ‘the food of the People of the Book’, the consumption of which has been permitted in the Qur’ān. In response to this, Sheikh (Dr) al-Raissouni says:

“this ruling has nothing to do with eating the food of the People of the Book, both of Christians or Jews, since it is permitted for a Muslim to eat the food of the Jews residing in Morocco, or any Muslim country, including consuming their sacrifice. Our statement is surrounding what we receive (of products) from these [occupiers] and aggressors, from that which they have stolen or of what they use to fund their theft and other crimes.”

The following product names and brands are often obscured or disguised by sellers. With this in mind, avoid them this Ramadan and throughout the year. Hadiklaim, the Israeli Date Growers Cooperative, “consolidates the activities of Israel’s largest and most advanced date producers” which include[5] those active in illegal settler plantations in the Jordan Valley and other occupied areas. Hadiklaim sells 70% of dates from the Zionist entity. Its brand names include:

These are in addition to Shams, Delilah, Rapunzel, Bomaja and others, some of which imitate Arabic names and can deceive one into buying them with good intentions. The above are widely sold in most High street stores, with significant spikes in sales during the month of Ramadan.[6]

Dates are also supplied by Hadiklaim to mainstream supermarkets under their private brands including Marks & Spencer, Sainsbury’s (Taste the Difference Medjool Dates), Tesco (Finest), Asda, Waitrose and Morrisons (M Signature Medjool Dates). Often these are labelled “produced in the West Bank”. These are not Palestinian dates, but those grown on Israeli plantations. It is essential that you check the label. Avoid dates produced or packaged in “Israel” or its illegal settlements. More information can be found on Friends of al-Aqsa’s website. [7]

The importance of this matter should not need stressing when we consider the vast majority of us consume dates when we break our fasts. Let it not be that we fast throughout the day from that which Allāh has made permissible, yet break our fasts with that which Allāh has made impermissible. Imagine the hunger and thirst you experience for the sake of Allāh, the patience one exhibits throughout the long, hot, summer days in the month of Ramadān; now imagine the reward for that being washed away because of our heedlessness in this grave matter of the violation of the rights of the creation of Allāh. 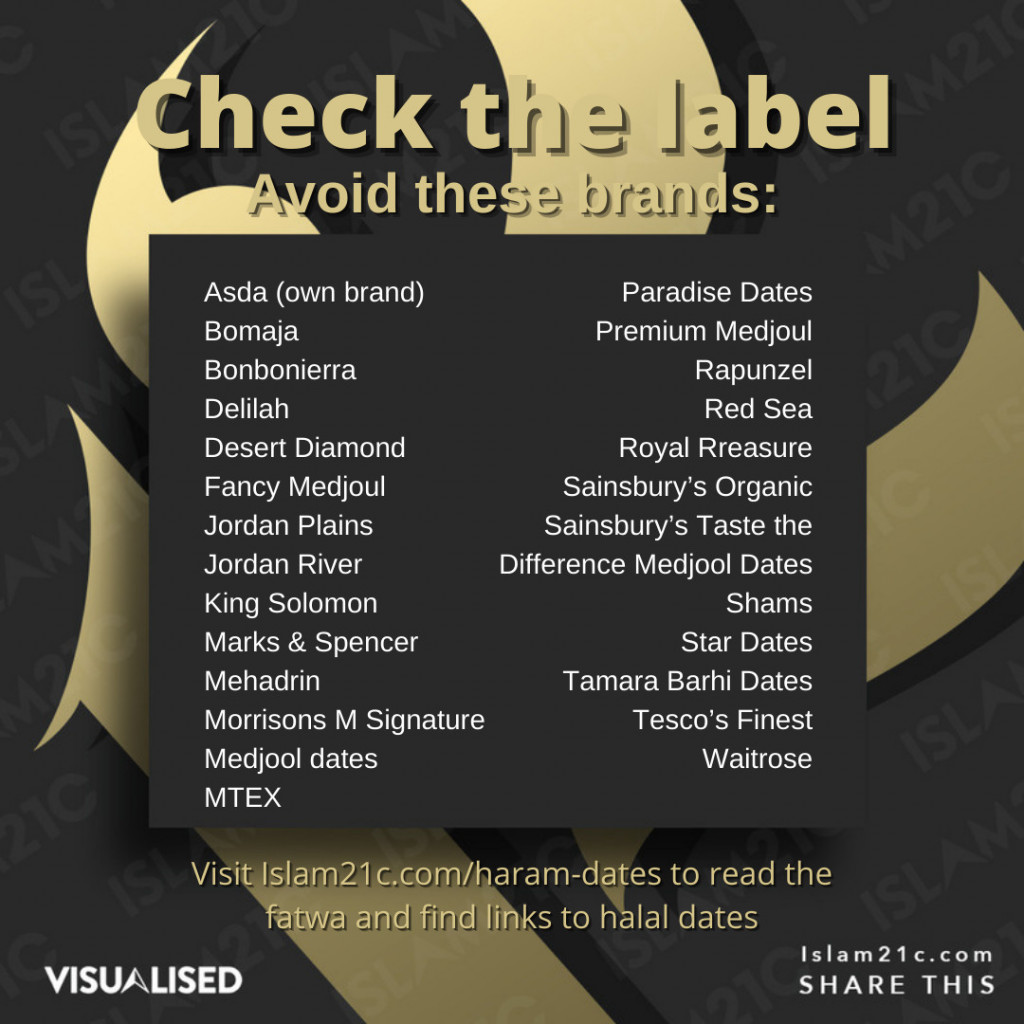 Islam21c have teamed up with AL ASALA date suppliers to supply you with Organic Premium Grade-A Ajwah dates picked straight from the blessed city of Madinah.