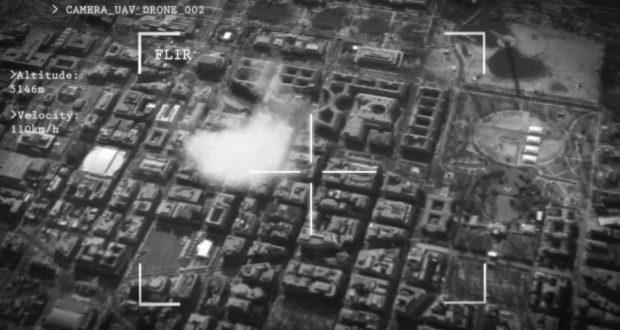 The UK-based Syrian Observatory for Human Rights has said that the US-led coalition carried out yet another bombing of a civilian instillation on Monday night. At least 33 people were killed in a school which was bombed, reportedly sheltering displaced people near the ISIS-held city of Raqqa.[1]

London Attack – opportunism at its worst

The Observatory activists counted at least 33 bodies at the site of the attack near the village of al-Mansoura. Director of the Observatory, Rami Abdulrahman, told Reuters that the nearest ISIS installation was a “religious school” 3 km (2 miles) away from Monday’s bombing.

Even the Syrian government urged the United Nations to stop “the devastation and destruction that the ‘international coalition’ is commiting,” according to state-run SANA news agency.[2]

The activist group, “Raqqa is Being Slaughtered Silently” said that the school that was bombed was sheltering 50 families. They issued the following tweets:

2-all the families are Displaced civillans from #Raqqa & #Aelppo countryside ,Their fate remains unknown #Syria #ISIS

The air strike comes days after last week’s multiple targeted strike on worshippers in a mosque in al-Jena, northern Syria, who according to local independent news agency OGN were bombed as they fled from the mosque into a nearby field.[3] Monday’s bombing was followed by another US-led air strike on the Iraqi city of Mosul on Wednesday, reportedly killing at least 230 Iraqi civilians.[4]

It is as of yet unknown whether or not these bombings were connected to Wednesday’s attack in Westminster that ISIS later claimed responsibility for.[5]