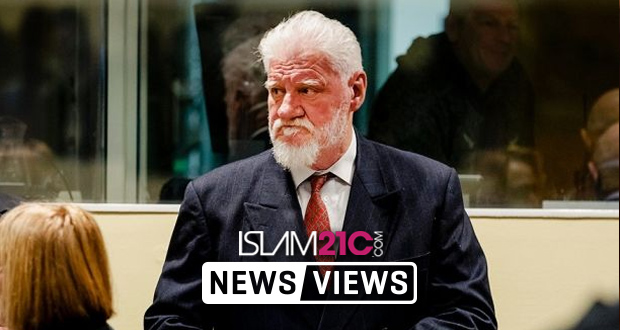 The Bosnian Croat war criminal, Slobodan Praljak, was pronounced dead after he was seen intaking some unknown poisonous substance.

The former Lieutenant General of Bosnian Croat forces took the poison seconds after United Nations judges turned down his appeal against a 20-year sentence for war crimes and atrocities against Bosnian Muslims, Croatian state television reported.[1]

The station quoted sources close to Praljak as saying he died in a hospital in The Hague.

The events took place in the final minutes of the court’s last verdict. The International Criminal Tribunal for the former Yugoslavia (ICTY), established by the United Nations in 1993, shuts its doors at the end of this year when its mandate expires.

The ICTY has indicted and dealt with 161 people, including those responsible for the 1995 Srebrenica Genocide. Over 1,000 witnesses have testified in trails about the Srebrenica massacre.

The 72-year-old—born on 2nd January 1945—according to a court document, “was informed of the fact that members of the armed forces were removing and placing in detention the Muslim population of Prozor from July through August 1993. He knew that crimes would be committed in Mostar municipality, in particular murders, the destruction of buildings in East Mostar (including the mosques and the Old Bridge), and the attacking and wounding of members of international organisations. He facilitated the murder of Muslims who did not belong to any armed force, and the destruction of property in Stupni Do in October 1993. He failed to make any serious efforts to put an end to the commission of crimes by the armed forces of the HVO.”[2]

One of Praljak’s charges was in regards to the ordering the destruction of a 16th-century Ottoman-era bridge in November 1993, which judges in the first trail had concluded that it had “caused disproportionate damage to the Muslim civilian population”. However, judges later allowed some of Praljak’s appeal saying that the bridge had been a “legitimate military target”.[3]

One of the worst genocides in Europe

The 1995 Srebrenica massacre is one of the worst genocides committed in Europe in recent years, with some estimates leaving the civilian death toll at 39,199.[4]

There were many instances of major violations against Bosnian Muslims.

During April of 1993, in the village of Ahmici in central Bosnia, where 116 Muslims—mostly women, children and the elderly—were killed, many of them burnt alive.[5]

20-years-later in 2013, only six former Croat political and military leaders were convicted of war crimes against humanity for their violence against Muslim Bosniaks. Their aim is said to be, to carve a separate Croat state out of Bosnia, and then unite it with neighbouring Croatia.

The recent news follows the conviction of Ratko Mladic, the “Butcher of Bosnia” last week, who shouted angrily and was removed from a courtroom in The Hague after he was convicted of war crimes.[6]

Indeed, those who have believed and done righteous deeds will have gardens beneath which rivers flow. That is the great attainment.[7]