Report author Yahya Birt and board member Jahangir Mohammed welcomed the release of the thinktank’s latest paper, titled “Ummah at the Margins: The past, present and future of Muslim minorities”
News 29/10/2022No Comments5 Mins ReadBy Shaheer Choudhury 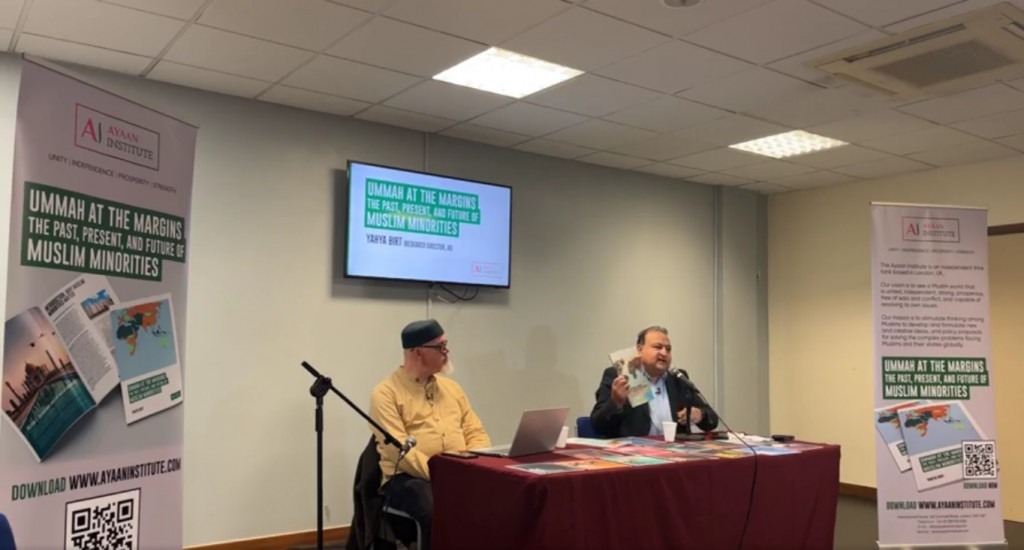 During a Friday evening event held at the London Muslim Centre, the Ayaan Institute proudly welcomed the release of its recently published report on Muslim minorities and the steps that various pockets of global Muslim minority groups can take in order to strengthen their positions in society. Representing the Institute was board member, co-founder, and director Jahangir Mohammed, in addition to Yahya Birt, a research director at the thinktank. [1]

In light-hearted opening remarks, Birt said to attendees that the report was in some respects “a bit like my love letter” to the Muslim community – this was in reference to his 30+ years as a Muslim and the warmth he has felt during this time.

“I’ve been a Muslim for over thirty years, and this is a community that welcomed me, that nurtured me, that inspired me… but it’s my community, my family. And so, this report is very personal to me.

“But having said that, it’s a conversation starter. The experience in this room alone … here are people that are sat in front of me … who have dedicated decades of their lives to serving their community. So you know from my perspective, this is a conversation opener.” [1]

The report is a major development that looks at the truly cosmopolitan and diverse nature of Muslim minorities spread throughout the world. It looks into the role that influential states such as India, China, and Russia are playing in the grand scheme of things, and how the aforementioned countries’ Muslim minorities have an arguably more significant role in the world situation of Muslims than elsewhere. [2]

As Birt mentions in the paper when discussing Russia, China, and India (what he terms “the Key Three”),

“All three have developed majoritarian systems that are hostile to Muslim solidarity that, in the last 20 years, adopted the securitized language of the global War on Terror. All three are economically significant nuclear powers, and none more so than China … the Key 3 are central to the post-West shift of global political and economic dominance to East Asia.” [2]

The Ummah is global, diverse and carries a universal message. But what IMPEDES the politics of Ummah among minorities and what IMPACT do the 'BIG FIVE' play?

Yahya Birt highlights the threats, opportunities challenges for Muslims minorities ahead while learning from the past. pic.twitter.com/afPBbwknmw

As an academic and a writer with over two decades of experience in public policy engagement, Birt is widely noted for his studies on the great 19th century British convert to Islam, Abdullah Quilliam. [3]

In addition, throughout his career, Birt has authored a dozen peer-reviewed academic articles on different aspects of British Muslim history. [3]

The groundbreaking “Ummah at the Margins” report is particularly significant for its deep dive into specific topics such as the Hindutva movement of India; the Uyghur and other Turkic Muslims of East Turkestan; the situation that Kashmiri Muslims continue to face; and other examples including the so-called “War on Terror” and related various military conflicts against Muslim populations over the years.

Birt also told attendees that his primary message or “global take-home from this report” is the following:

“Solidarity for our Ummah thrives, when we connect and empower the minority and the majority Muslim worlds together. And it may seem like a banal statement, but actually to do that in practice is actually something we should view as a constructive challenge that we have to try to meet.

“One could argue that … we are in a situation where the Muslim majority world … see their ethnic diasporas in the Muslim minority world as quite a strategic liability or asset … And if some Muslim nations want to project a kind of Islamic soft power in national interests, they again would see Muslim minorities in that light. So we often have seen … support for community development in Muslim minorities, but we’ve also seen an attempt, if you like, to shape … the political priorities [and] theological outlooks … of Muslim minority communities.

“The report today is really part of our framework thinking in relation to how Muslim minorities around the world relate to Muslim majority countries and how we can contribute to making not just the minorities here in the UK successful, but elsewhere … We are based in the UK and our focus is here, so we would like to have a discussion about how things can be done better.” [1]

In closing remarks after taking questions and comments from the floor, Birt informed attendees of an upcoming one-day course that is due to take place on December 3 at London’s Ebrahim College.

The course is focused on the report and will be attended by the likes of Dr. Anas Altikriti from the Cordoba Foundation, as well as Dr. Hassan Abedin from the 57 member state Organisation of Islamic Cooperation (OIC).

Download a free copy of the full report here.