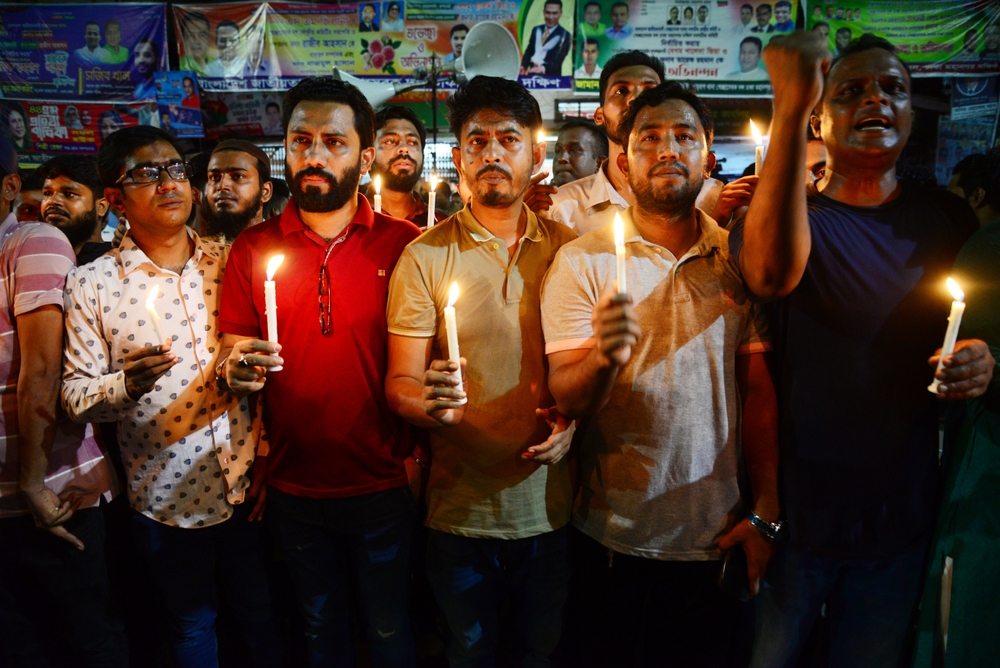 Dhaka, 17 September 2022: BNP activists hold a candle-light vigil to protest against the sharp price rise in daily necessities, along with the killing of three activists in a reported police shooting. Photograph credit: Mamunur Rashid / shutterstock.com

Bangladesh’s main opposition party, the Bangladesh National Party (BNP), has claimed that the Awami League government has in recent months charged tens of thousands of people with “fake” cases. Sairul Kabir Khan, a spokesperson for the BNP, said that since late August, police had charged at least 4,081 named party supporters, in addition to a peculiar further 20,000 unidentified BNP supporters. Since 22 August, the country has seen a number of BNP-initiated protests decrying the crippling fuel and commodity price rises. The government has responded by reportedly going after those who have criticised its lack of action. [1] [2]

On Monday, Human Rights Watch (HRW) warned that the repressive attitude being taken by the government and government-controlled law enforcement agencies is causing the rule of law to be eroded at an alarming rate. [3]

The South Asia director at HRW, Meenakshi Ganguly, said in a statement,

“Prime Minister Sheikh Hasina has repeatedly said that Bangladesh is a mature democracy capable of conducting elections and a peaceful transition of power, but instead previous polls have been marked by violence, attacks on the opposition, and voter intimidation. These recent cases of political attacks and arrests set an ominous tone for the upcoming parliamentary elections.” [3]

“Although four of our leaders and activists were killed, we will not leave the streets. As a democratic party, we will continue to wage our peaceful and systematic movement.” [4]

The Muslim-majority republic has been impacted by state repression for decades, with various international rights organisations highlighting government actions that suffocate free and open debates regarding policies and other government business. It is understood that four BNP leaders and activists have died since the latest round of protests began in late August, with further hundreds injured. However, this does not appear to be causing any winding down in appetite for peaceful anti-government demonstrations. [4]

The death of Shaon Pradhan

The killing of youth activist Shaon Pradhan on 1 September has rocked the nation and infuriated BNP supporters after it emerged that a police ‘sub-inspector’ was the one being accused of firing at Pradhan during a BNP programme that marked its 44th year anniversary. Pradhan was believed to be a member of the Jubo Dal, the youth wing of the BNP. [2]

In the aftermath of Pradhan’s death, it was reported that his family had to bury him in the middle of the night while a heavy police presence remained in place to avoid any outbreaks of violence. Following Pradhan’s autopsy at Narayanganj General Hospital, the burial hastily took place around 45 minutes after police had handed his body over to relatives. [5]

The uncle of Shaon Pradhan, Shawkat Ali, told reporters that the young activist was buried at the Nabinagar cemetery after the janāzah prayer was performed by around 400 attendees at Shahar Ali High School. [5]

Fuel prices on the exponential rise

Since August, the government has argued that it has had no choice but to raise fuel prices. The price of petrol, alone, has risen by over 50 per cent. [6]

Blaming the ongoing conflict in Ukraine, the Sheikh Hasina-led Awami League government has also had to hike up the prices of diesel and kerosene – two key fuels used in lighting, cooking, the production of electricity, as well as providing power for generators. The price hikes have resulted in devastating consequences for many on the breadline in poverty-stricken Bangladesh. [6]

35-year-old Mohammed Nurul Islam, who lives in Dinajpur, told BBC News in August that he might need to start street begging if the prices do not soon come down.

“When I go to the market, I can’t buy enough food for my family. If the price of fuel keeps increasing like this, I can’t look after my parents or send my children to school. If I lose my job, I might have to start begging in the street.” [6]

Police in the government’s pocket

Sheikh Hasina has held the office of prime minister of Bangladesh for the past thirteen years. The daughter of the late Sheikh Mujibur Rahman, Hasina has led with an iron fist and campaigners have long criticised her for the routine use of forced disappearances and extrajudicial killings against those who express disagreement with her government’s policies.

BNP executive committee member Tabith Mohammad Awal was one of those who were injured in recent demonstrations. Awal told HRW that the police did nothing to protect him from harm. [3]

“I can clearly identify my attackers, who were members of the Awami League North Dhaka committees… The police were present but did absolutely nothing to help me or stop the attacks or even help after I was hurt. Later, the OC (office-in-charge) of Banani even denied anything happened.” [3]

The tactical use of laying charges against “unknown” people is something that HRW has pointed out as being “a common abusive practice in Bangladesh, allowing the police to intimidate and threaten virtually anyone with arrest, to repeatedly re-arrest detainees even though they are not the named accused in the cases, and to thwart bail requests.” [3]

During Hasina’s leadership of the country, the police have regularly been seen as an extension of the security services who act with impunity against the opposition. Indeed, Hasina’s chief rival, Khaleda Zia – who herself has served two terms as prime minister between the years 1991-1996, and 2001–2006 – has previously described the country as a “police state”. [7]

“None can hang on to power for long in this way. The government wants blood and we want to bring back democracy in exchange of blood… The government has made the whole country a prison.

“It seems to me that a war-like situation is prevailing across the country… This government has not only confined me, they turned the entire country into a jail… The movement against the illegal government will continue… Awami League has to face dire consequences.” [7]

At the time that Zia made the above remarks, the government had instructed the police to confine her to her office, even going as far as to lock all gates around the premises in order to block her from vacating the area. When Zia stepped into her vehicle and attempted to go and participate in an anti-government rally, her supporters sought to push past the police and open the gates. However, they were met with pepper spray. [7]

In 2018, Zia was charged and found guilty of a number of corruption charges. Being sentenced to a total of 17 years in prison, she spent two years in jail before being released on probation. The licence conditions included being barred from leaving Bangladesh and only receiving medical care in her Dhaka residence. [8]

Leader of the opposition in deteriorating health

Today, Zia is in particularly poor health; she was diagnosed with cirrhosis of the liver in late 2021 and contracted COVID-19 in April 2021. In June 2022, she suffered a heart attack and was immediately admitted to hospital for surgery, where a stent was inserted and arterial blockages removed. In addition to the heart and liver issues, Zia also suffers from arthritis, diabetes, kidney, lung, and eye conditions. [9]

While still at the helm of the main opposition party at age 77, Zia remains a hugely influential figure in Bangladeshi politics. However, her advanced age and deteriorating health has meant that she is taking less of a prominent role in holding prime minister Sheikh Hasina to account and calling her out on her mistakes.

The government continues to reject calls from Zia’s family and from BNP campaigners for her to be granted permission to travel for overseas medical treatment.

The country is set to hold a general election by December 2023.

Unfortunately, there is a trend surrounding elections whereby violence increases manifold, but given that Sheikh Hasina’s Awami League party has won the past three general elections with landslide victories, the BNP and other opposition parties remain justifiably skeptical that anything will truly change.

Nevertheless, opposition parties including the BNP continue to apply pressure on the Hasina government, hopeful that eventually they will be able to effect a positive outcome.