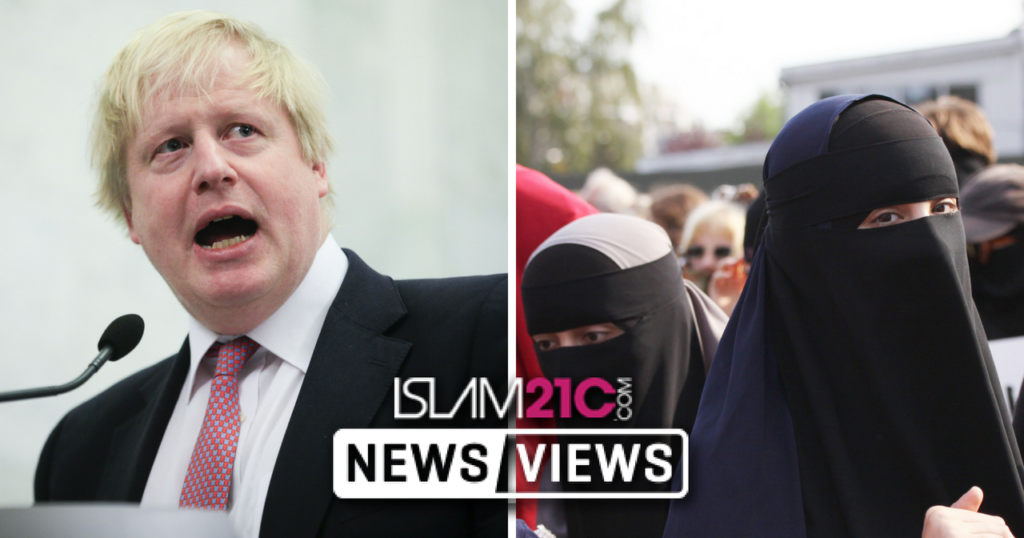 Boris Johnson is to be investigated by an independent panel following dozens of complaints against him over his recent Islamophobic article for The Daily Telegraph, in which he likened Muslim women who wear the niqab to bank robbers and letterboxes.[1] Although further detail has not been provided, the BBC reported that the panel may decide to refer Boris Johnson to the party’s board, with expulsion a possible outcome.[2]

The former Foreign Secretary was widely criticised for his blatant attempt to appease his growing far-right base after the offensive remarks, and has thus far ignored numerous calls to apologise, including from Prime Minister Theresa May and the Conservative Party Chairman Brandon Lewis.[3]

It is a sad indication of the reality of the Conservative Party when unashamed pandering to the far-right with Islamophobic sentiment is seen as a means to build one’s leadership bid. The Muslim Council of Britain (MCB), amongst many other prominent Muslim voices, have been calling for the party to launch a formal inquiry over the many recent cases of Islamophobia by party members, although the Chairman Brendon Lewis has continued to refuse to do so. Reacting to today’s news, the MCB’s Secretary General Harun Khan renewed the urgent call, saying:

“We welcome the steps the Conservative Party has taken, but the road ahead is long. While the choice of panelists are for the Party to decide, to avoid accusations of a whitewash, the group should include people who are aware of the seriousness of the issue and its effect on society.

Any investigation looking into Mr Johnson’s incendiary comments must take into account the impact on the victims, in this case, Muslim women. Today over a hundred women who choose to wear the niqab or burka have written to the Conservative Party chair to express how threatened they feel as a result of the prejudice whipped up by Mr Johnson. We hope their voices are listened to and considered carefully as Lord Macpherson had suggested.

This episode once again has exposed the simmering underbelly of Islamophobia that exists in sections of the Conservative Party. Nadine Dorries shockingly appeared to link domestic violence to wearing of the niqab.

There have been widespread calls from prominent Conservatives, activists, faith communities and others for an independent inquiry into Islamophobia into the Party. When we at the Muslim Council of Britain highlighted daily occurrences, we were not only given short shrift by the Party Chairman, Conservatives and their allies in the media chose to attack the messenger. Enough is enough. We need action from the Conservative Party. Nothing less will do.” [4]

The letter referred to in his statement delivered a strong message from the Muslim sisters most affected by such dog-whistle politics; a voice which is rarely given prominence as the Government and media seek to dictate so-called British values and impose their chosen ideals over supposedly free women.

“We, the undersigned, write to you as British Muslim women who wear the niqab or burqa.

We speak as free women who are able to speak for ourselves and make our own choices. Our decision to wear the niqab or burqa is not an easy one, especially given the hate that many of us experience on a regular basis. Nevertheless we do so because we believe it is a means to get closer to God.

We recognise that this is not the practice of the majority of Muslim women and that it is a very small number who make this choice in the UK. All personal choices should be respected.

Contrary to what you may have been told by sections of the media and columnists who profess to know what is best for us, we are not forced to make these clothing choices, nor are we oppressed.

As women who wear the niqab or burqa, we have not forfeited our right to be treated fairly and as equal citizens in this country. Yet we have representatives of our governing party who think otherwise and who use Muslim women in order to pander to far-right Islamophobes within the party, as Boris Johnson has done.

We understand that you have requested Mr Johnson to apologise.

As chairman of a party that seeks to represent the whole country, which protects individual liberty as a cherished British value, your call – we believe – is insufficient.

Given a deliberate choice was made to inflame tensions in a way that makes it easier for bigots to justify hate crime against us, we concur with Conservative peer, Lord Sheikh, who has demanded the whip be withdrawn from Mr Johnson.

Furthermore, given the responses from other MPs, specifically Ms Dorries, and the broader concerns that have been raised by the Muslim Council of Britain amongst others, we believe that there must now be an independent inquiry into Islamophobia in the Party to tackle this issue once and for all.

Our rights as equal citizens may be debated within wider society, but such vile language which has real consequences for us, should never be acceptable.

We are happy to speak to Members of Parliament to share our experiences and perhaps demystify some of the concerns they may have.”[5]