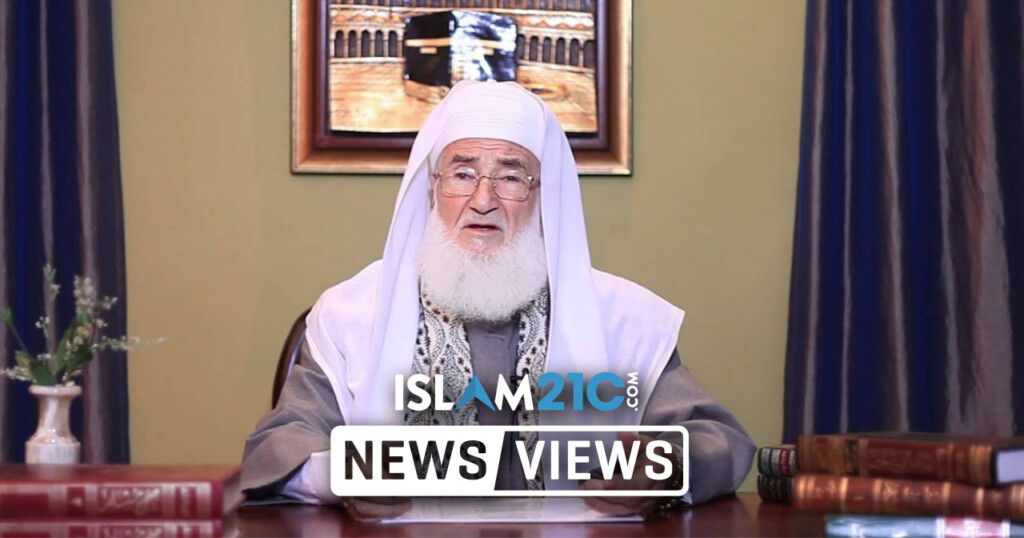 Islam21c would like to offer its heartfelt condolences to the people of Syria and the entire Ummah on the passing of one of the country’s greatest and most senior scholars, Shaykh Mohammed ʻAli al-Ṣābūnī, who passed away today (Friday 19th March) at the age of 91.

Death is a certainty of life. Indeed, life itself is a test. Man shall die and be questioned. It is in this sense that Allāh informs humans by way of counsel and encouragement that it is only the believers who are successful, those who avoid the Fire and secure admittance into Paradise. When a believer dies, it is a time of great tragedy and loss for the community, but those who submit to the will of Allāh pay heed to what has been revealed:

“Certainly, We shall test you with something of fear, hunger, loss of wealth, lives, and fruits. But give glad tidings to the patient; those who, when afflicted with calamity, say: From Allāh do we come, and to Him we shall return.”[3]

Mohammed ʻAli al-Ṣābūnī was born in Aleppo, Syria in 1930 to a family of learning. His father, Shaykh Jamīl, was one of the senior scholars of the city, from whom he received much of his initial and formal education in Arabic, inheritance, and other sciences of the religion. He memorized the Qur’ān whilst still in primary school and completed his higher secondary school education while still young.

He then joined the famous Khasrawiyya school of Sharī‘ah in Aleppo, where he combined Islamic Studies and studies in the secular subjects. He graduated in 1949 with excellent results, and the Ministry of Awqāf (Endowments) sent him to further his studies at the famous Al-Azhar University in Egypt. He later graduated from the Faculty of Sharī‘ah in 1952 and completed his specialisation course in 1954.

After completing his studies, he returned to Aleppo where he taught Islamic education in various secondary schools in the city for around eight years from 1955. He was appointed as a lecturer at the Faculty of Sharī‘ah at the Umm al-Qurā University and at the Faculty of Education of the King ‘Abdul ‘Azīz University (both universities in Makkah), where many prominent scholars graduated under his guidance for 28 years.

Shaykh ʻAli al-Ṣābūnī authored numerous books that were well-received all over the world. Many of his books were translated into other languages, including English, Urdu, Persian, and Turkish. He even conducted some lessons in the Karām of Makkah, as well as conducting weekly lessons in one of the mosques of Jeddah in tafsīr. These lessons continued for about eight years, during which he completed around two-thirds of the Qur’ān, which were recorded on audio cassettes.

He edited Ma‘āni al-Qur’ān by Imām Abū Jā‘far al-Naḥḥās (d. 338), which was published in six volumes. Thereafter, he worked as an advisor with the Muslim World League, in the Council for Scientific Research in the Qur’ān and the Sunnah. He remained there for a few years, after which he devoted himself entirely to writing and research.

More recently, he featured in the 2021 edition of The Muslim 500, an annual publication comprising of the 500 most influential Muslims in the world. His entry in the prestigious publication reads:

“Al-Sabouni is influential because of his easy-to-read, simplified commentaries of the Holy Qur’an. They are now thought of as some of the most popular short commentaries in history after those of Jalalayn, Baydawi, Ibn Kathir and Ibn Juzayy. One of al-Sabouni’s most influential commentaries is the Tafsir Ayat Al-Ahkam, an exploration of the Qur’anic verses that pertain to legal rulings.”