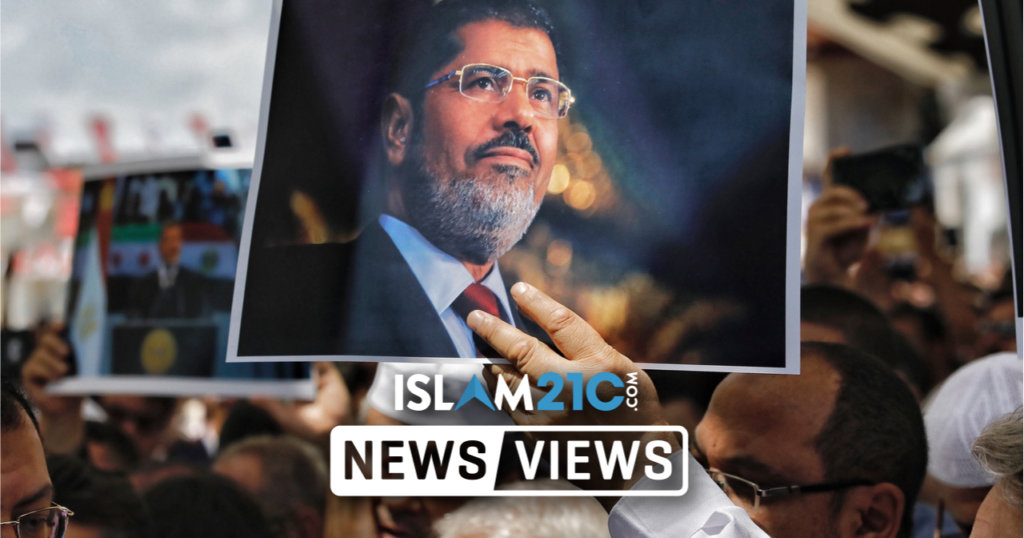 Just a few days before the second anniversary of the passing of former Egyptian President Dr Mohamed Morsi (raḥimahu Allāh), yet another act of injustice has been committed. Egypt’s highest civilian court of appeal, the Court of Cassation, has upheld death sentences for a dozen senior members and leaders of the Muslim Brotherhood. In its decision, the Court of Cassation upheld the death sentences issued previously by a lower court for a case which has colloquially been referred to as the “Rabaa sit-in dispersal”. [1]

The judicial case deals with the tragic events of 14 August 2013. This was when security forces comprising of both the police and army decimated two sit-in protests – one in Cairo and the other in Giza – that were being held in support of the late President Morsi. Hundreds of deaths were inflicted when security forces violently subdued the pro-Morsi demonstrations in Cairo’s Rabaa al-Adawiya and Giza’s al-Nahda squares. Egypt’s official National Council for Human Rights reported 632 deaths, including 8 police officers. But international human rights organisations dispute these figures, instead arguing that the total number of deaths is far greater.

In 2014, just a year after the deadly events, Kenneth Roth, the executive director of Human Rights Watch, provided the following chilling statistic: “In Rab’a Square, Egyptian security forces carried out one of the world’s largest killings of demonstrators in a single day in recent history.” [2]

Roth further noted that the killing of peaceful protesters was premeditated:

“This wasn’t merely a case of excessive force or poor training. It was a violent crackdown planned at the highest levels of the Egyptian government. Many of the same officials are still in power in Egypt, and have a lot to answer for.” [2]

The Court of Cassation’s ruling, which is final, means that the twelve men will likely have their death sentences carried out in the foreseeable future. What only remains for the ruling to become legally binding is the stamp of approval from the country’s leader, the brutal dictator Abdul Fattah al-Sisi. The ruling of capital punishment, which was originally decided upon in a trial a few years earlier, included several prominent members of the Brotherhood. Mohamed al-Beltagy, a physician, former Member of Parliament, and current general secretary of the Freedom and Justice Party, is a high-ranking leader of the Brotherhood who faces the death penalty. Abdel-Rahman el-Bar, one of the Brotherhood’s top scholars, is another prominent member who faces execution. Other figures whose death sentences were sustained include the former minister of youth, Osama Yassin, and Muslim Brotherhood spokesperson, Ahmed Aref. [3] [4]

In response to the Court’s ruling, the Brotherhood swiftly responded with the ultimatum that authorities rescind the death sentences. The Brotherhood has sternly noted that in any case, the recent court ruling will not weaken the resolve of the organisation to continue its work. [5]

An Egyptian court upheld the death sentence of 12 members of the Muslim Brotherhood on Monday, including two senior leaders of the group. pic.twitter.com/NkOss89YIS

Amnesty’s Philip Luther, who currently presides as Middle East and North Africa Research and Advocacy Director, dismissed the legitimacy of the court ruling:

“These ruthless death sentences, which were handed down in 2018 after a grossly unfair mass trial, are a stain on the reputation of Egypt’s highest appeals court and cast a dark shadow over the country’s entire justice system.” [6]

“Shockingly, Egyptian security forces continue to evade justice for the deadly violence they unleashed against protesters in Cairo’s Rabaa al-Adawiya and al-Nahda squares in August 2013 killing at least 900 people and injuring thousands.

“The Egyptian authorities have to date taken no measures to hold the perpetrators of this massacre to account. They must do so without further delay.” [6]

June 17 will mark the second anniversary of the death of Dr Morsi, Egypt’s only democratically elected leader. The late leader was a ḥāfiẓ of the Qur’an and regularly performed Fajr prayer at the masjid. He was also an intellectual and trained academic who taught engineering at the university level. In terms of academic credentials, he successfully earned a doctorate degree in material science from the University of Southern California, and even was employed as an assistant professor of engineering at California State University. He passed away on 17 June 2019 whilst attending one of the many sham court hearings initiated by the subsequent Sisi regime. [7] [8]

Share. Facebook Twitter LinkedIn Email Telegram WhatsApp
Previous ArticleSulaymān: The Excellent Slave
Next Article A Statement by the Scholars of the Ummah Regarding the Unjust Death Sentences in Egypt