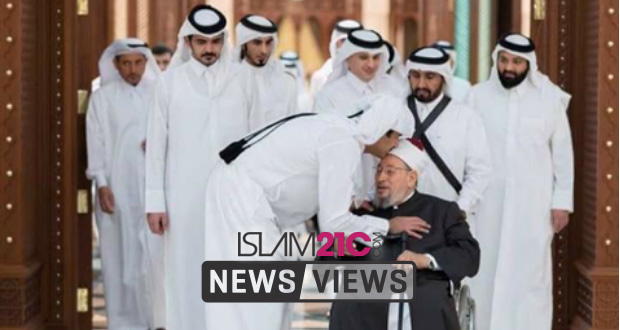 The popular Emirati journalist, Mohammed Najeeb has been widely criticised for inciting the assassination of prominent Qatar Based, Egyptian Muslim Scholar, Sheikh Yusuf al-Qaradawi. In a Tweet on the 7th of July at 10:41am, Najeeb, the former head of Abu Dhabi’s Sports Channel said:[1]

“Salim Khan Yandarbiyev is a Chechen figure opposed to Russia. He was killed by the Russian Intelligence Agencies by exploding his car in Doha (Qatar)… Is the Egyptian Intelligence incapable of repeating this with Al-Qaradawi?”

Many were quick to condemn his incitation to murdering Al-Qaradwi, asking if such a call does not demonstrate Najeeb advocating terror, the very matter he is allegedly trying to combat. In a ‘clarification’, the commentator tweeted at 13:21:

“There is a price that needs to be paid…” Adding, “those who threaten me with Interpol, Interpol will soon summon those who spread terrorism throughout the world.” Then commented: “The rocky excursion [in reference to Qatar], and those who lead it have hosted terrorism and supported it, so revenge against them is necessary.”

This is not the first of Najeeb’s inflammatory remarks, but one of an array, including many levelled at Qatar and Turkey, some of which plead with Gulf states to continue supporting separatist Kurdish movements who are currently at war with Turkey and responsible for concurring terrorist bombings on Turkish land. Since the Gulf Cooperation Council’s (GCC) siege on Qatar, this rhetoric has become rampant and largely normalised, whilst criticism of the respective GCC countries’ siege on the lonely state is harshly outlawed with the UAE imposing jail terms of upto 15 years and fines up to $136,000 for merely showing ‘sympathy’ to Qatar.[2]

It is noteworthy that the UAE depends on imported gas from Qatar to generate half of its electricity, with its plush and glittery sky-scrapers going dark should Qatar choose to halt its exports.[3] Members of the GCC are yet to provide evidence that Qatar supports ‘extremism’ or even validation, other than speculation on part political analysts of precisely who is meant by this term.