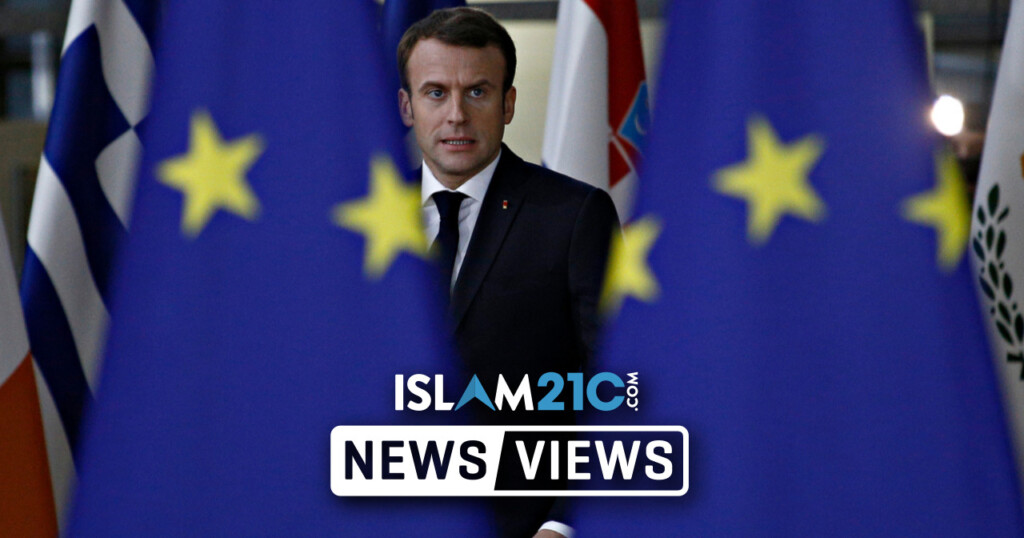 In solidarity with the teacher beheaded for showing the images (some of which contained nudity) to his young students, some government institutions projected the cartoons onto the side of their buildings,[1] effectively making the Islamophobic cartoons an official stance.

Macron’s comments and the response of the French government has led to a social media campaign calling for the boycott of French products from supermarkets in Muslim countries. On Sunday, the French foreign ministry urged Arab countries not to take part in the boycott.

Hashtags such as #BoycottFrenchProducts and #الا_رسول_الله (‘anyone but the Prophet’) trended across Muslim countries, including Kuwait, Qatar, Palestine, Egypt, Algeria, Jordan, Saudi Arabia, and Turkey.

Political leaders in Turkey and Pakistan have criticized Macron, accusing him of not respecting “freedom of belief”[2] and marginalising millions of Muslims in France while offending over a billion Muslims globally.

Turkish President Recep Tayyip Erdoğan called out Macron for the French government’s Islamophobic stance, questioning his sanity. “Macron needs mental treatment,” Erdoğan said, “What else can one say about a head of state who treats millions of members from different faith groups this way? First of all, have a mental check.” [3]

Erdoğan’s statement led to the recalling of the French ambassador from Turkey.[4] However, the French government’s stance proved to be an own-goal as a number of countries in the Gulf joined in boycotting French products.

In Kuwait, the Al Naeem Cooperative Society decided to boycott all French products by removing them from supermarket shelves. The Dahiyat al-Thuhr association took the same step, saying: “Based on the position of French President Emmanuel Macron and his support for the offensive cartoons against our beloved Prophet, we decided to remove all French products from the market and branches until further notice.” [5]

“We have immediately withdrawn French products from our shelves until further notice … We affirm that as a national company, we work according to a vision consistent with our true religion, our established customs and traditions, and in a way that serves our country and our faith and meets the aspirations of our customers.”

Qatar University also joined the campaign by postponing a French Cultural Week event indefinitely in response to the “deliberate abuse of Islam and its symbols.”

On Twitter, the university said that any prejudice against Islamic belief, sanctities, and symbols is “totally unacceptable, as these offences harm universal human values and the highest moral principles held in high regard by contemporary societies.”[6]

The Gulf Cooperation Council condemned the French president’s statements as “irresponsible” and aimed at spreading a culture of hatred.

Earlier this month, Macron pledged to fight against “Islamist separatism”,[7] which he said was threatening to take over Muslim communities in France.

Macron also described Islam as a religion “in crisis”[8] while defending the publication of Islamophobic anti-Islam caricatures and announcing new laws to govern and regulate Islam in France.

These new measures will be presented by Macron’s government in December to strengthen a 1905 French law which, in a twist of irony, was originally meant to separate church from state.

On Sunday, France urged Arab countries to stop the boycott of French products.

In a statement, the French foreign ministry said: “These calls for boycott are baseless and should stop immediately, as well as all attacks against our country, which are being pushed by a radical minority.”[9]

The statement added that diplomats were asking countries where boycotts were being organised not to back them.

“In numerous countries of the Middle East, calls to boycott French products…and more generally, calls to demonstrate against France, in sometimes hateful terms, have been relayed on social media,” the French foreign ministry said. It added that such calls “denature” France’s positions on freedom of expression and conscience.[10]

However, Macron’s stance has remained unrepentant.

In a shamble of a tweet, the French president persisted on his stance, writing: “We will not give in, ever.” In spite of taking a firm stance with the hate-inciting material, Macron added: “We respect all differences in a spirit of peace. We do not accept hate speech and defend reasonable debate. We will always be on the side of human dignity and universal values.”[11]

Macron’s contradictory stance comes at the expense of his nation’s international standing. Yet as the international reputation and trade relations of France fall apart, it seems that Erdoğan’s recommendation of a health check may be in Macron’s best interests.