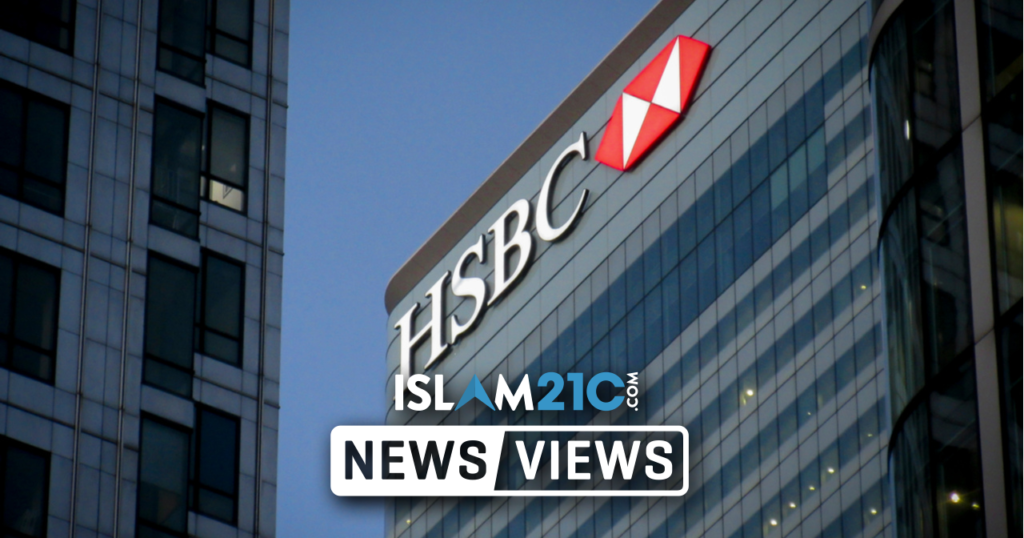 Banking giant HSBC has written to its customers to inform them that the bank will no longer process money transfers to Interpal, a vital and empowering charity that provides humanitarian and development aid to Palestinians in need.

HSBC customers received a short letter from the bank informing them of its decision to stop honouring the standing order. However the letter failed to provide any explanation for its decision, though it conceded that the payments were “allowed under local laws”.

Social media commentators have suggested that HSBC’s decision was made to coincide with the start of Ramadan in order to stop all standing orders in the last 10 nights of Ramadan when Muslims are notably most generous.

Some have argued that this only demonstrates a callous calculation to exert maximum disruption upon the lives of ordinary Palestinians during these critical and unprecedented times. These are times where innocent Palestinians are facing some of the most difficult challenges and hardships in areas such as the West Bank, Gaza Strip, and the refugee camps in Jordan and Lebanon.

Ibrahim Hewitt, chairman of the board of trustees of Interpal, said:

“It is disappointing that a major bank would do this during Ramadan, which is so important for donors and our beneficiaries. But also during the coronavirus pandemic. No reason has been given, neither to the donors nor the charity. That is quite astonishing.”[1]

Interpal is a long-standing and trusted charity within the Muslim community. It has been operating within Palestine since 1994 and its services range from dealing with the current Covid-19 epidemic in Gaza to child sponsorship.

The charity aims to alleviate difficulties faced by Palestinians through its programmes which provide varied, multi-dimensional aid that responds to the urgent needs on the ground. The donations provide families with medicines, books, and clothes.[2]

HSBC has certainly raised eyebrows with its choice and left itself open to questions over whether its motivations are lawful or not. Some commentators have suggested that the Bank’s move may well have also fallen foul of The Equality Act.

HSBC’s current decision with respect to Interpal should also be considered in the context of its withdrawal of banking services from Ummah Welfare Trust – another well respected and trusted charity working to alleviate the suffering of the wider Muslim community.

Interpal has previously successfully defended itself against libellous claims. In 2005 it won against Board of Deputies of British Jews, and a year later The Jerusalem Post was forced to apologise to Interpal. Just last year, the Daily Mail paid £120,000 in damages to Interpal and issued an apology stating:

“The Trustees assure us, and we accept, that neither Interpal, nor its Trustees, have ever been involved in or provided support for terrorist activity of any kind. We apologise to the Trustees for any distress caused.“[3]

HSBC has denied any form of discrimination. As for questions surrounding the reasons why it had taken action to stop any standing order payments to Interpal, or why this decision was being announced around the time of Ramadan, there was no response from the bank.

The multinational bank, which has a significant presence in Malaysia with HSBC Amanah, as well as Turkey and the Middle East, must be concerned that such dismay does not spread further across the Muslim world. Should it do so, the effect on HSBC’s bottom line with clients and businesses across the ummah shutting their accounts down would be considerable.

Others have suggested that HSBC’s unilateral decision may set a dangerous precedent in which an organisation (who itself has faced questions about its processing of circa £500 million in KGB and criminal funds out of Russia)[4] feels it is able to make a moral judgement on the lawful charitable activities of its clients. If this is allowed to go unchallenged, other charities – be they climate activists or animal rights campaigners – should not be surprised if in years to come their accounts are too shut down without lawful justification.