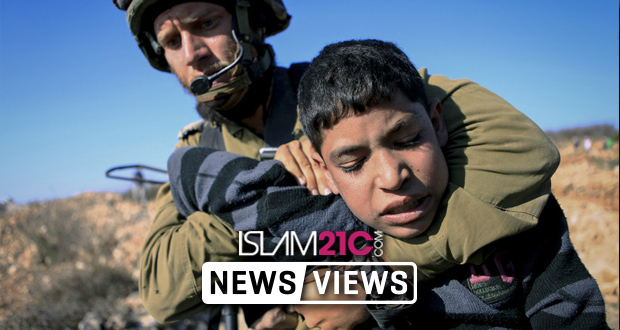 As of the beginning of this year, over 7,000 Palestinians are detained in Israeli prisons with 591 Palestinians, including 300 children, given life sentences.

It is widely known that occupying Israeli soldiers arrest Palestinians in their own land under dubious and often unjust grounds, however it is abhorrent to find they have been profiting off terrorising children as young as 6 years old.

Only last month, 6 year old Ashraf was arrested, beaten and held for questioning for hours for throwing stones at an armed and armoured Israeli soldier.[2] Ashraf is just one of thousands of children left traumatised from brutish encounters with the occupying forces.

The well-known case of Ahed Tamimi, arrested and sentenced for retaliating to a soldier slapping her, is another such case.[3]

Also read: When I Met the Family of Ahed Tamimi

Appallingly, arrests are the least inhumane of the Israeli soldier’s actions. Human Rights Watch releases a yearly report detailing the gross human rights violations against Palestinians by Israelis. It has been documented that Israeli security forces use excessive lethal force in more than 150 cases, and at times extrajudicial executions.[4]

“Israeli security forces continued to arrest children suspected of criminal offenses, usually stone-throwing; question them without a family member or a lawyer present; and coerce them to sign confessions in Hebrew, which they did not understand. The Israeli military detained Palestinian children separately from adults during remand hearings and military court trials, but often detained children with adults immediately after arrest.”[5]

With an annual spending of over $15billion on the Israeli military alongside the $38 billion package of military aid from the US, that Israel would extortion impoverished Palestinian families to free their children demonstrates the inhumanity and greed permeating the illegal state.[6][7]

“Human rights transcend politics […] Regardless of our political preferences and ideological preferences we should all be outraged when human rights, especially those of children, are violated […] The abuse of Palestinian children should shock the conscience of every person who believes in human rights and basic decency.”[8]